Interview: The Ice Road writer and director Jonathan Hensleigh on his love of the action genre and shooting practically

Though his name might not be instantly recognisable, it’s supremely unlikely that you haven’t at least heard his dialogue.  As a screenwriter for such successes as Die Hard With A Vengeance, Jumanji, The Rock, Con-Air, and Gone In 60 Seconds, Jonathan Hensleigh has more than placed his stamp on the action genre for close to three decades now.

After a ten-year break since his last directorial effort, 2011’s Kill The Irishman, Hensleigh has returned to helm The Ice Road, a dramatic action piece starring Liam Neeson and Laurence Fishburne.  Ahead of the film’s local cinema release, Hensleigh chatted with our own Peter Gray about the practicalities of the shoot, the inspiration behind the film itself, and how he secured Neeson in the lead role.

When I saw the films that you had worked on as a writer, I realised just how many of my childhood favourites were from your hand.  Where did that affinity for the action genre come from?

Watching them (laughs).  There’s a term that people in Hollywood use called “Golden Window”, which is that period in your life of, say, 12 to 14 years old where films impact you the most and stay with you.  A lot of those films (for me) were right in the wheelhouse of Clint Eastwood’s career, you know? The Dirty Harry movies and all of that, and then also the early (Steven) Spielberg stuff. But that period, up to about Jaws I would say…I liked pictures that had forward momentum.  I love all different type of pictures though.  I love The Godfather and Chinatown, pictures from that era, but the ones that got me going were the action/adventures.

Do you prefer to write the movies you want to direct?

No (laughs).  I wish there was a conveyor belt or magical tree that had them.  So often when you hear an excellent concept for a film, you say “How can I be involved in that”, and then it’s already got a director or it’s been optioned.  My directorial career has not gone the way my writing career has.  My writing and producing career kept forward without any obstructions.  My director career has been spottier, so I’ve had to fight a little bit harder.  I think The Ice Road will be influential in that regard.  I can make these pictures and, it’s been correctly perceived, that I can make them for less money than a lot of other people.  I’m willing to get down and dirty.

I imagine there has to be interest in the core subject of your film.  Where did the idea originate for The Ice Road?

It was two things.  It was my admiration for Wages of Fear, a (Henri-Georges) Cluzot picture from the 1950’s that stuck with me forever, and then Billy Friedkin remade it in the 1970’s with Sorcerer, and I was always looking for that simple concept of ne’er-do-wells having to drive cargo across a really dangerous terrain.  I couldn’t figure out how to do it, and the years passed and I’d take notes here and there.  I then saw Ice Road Truckers, the reality show, and it just clicked.  This is the way to do it.  This will be influenced by Wages of Fear but it won’t be a remake.

As you said it was quite a practical shoot.  When it comes to the location and the crews how do you go about finding the right people?

You just sit down and start planning.  From the onset we wanted to attempt a live action shoot, in other words, real 18-wheelers on a real frozen lake, which had never been done before.  We needed an ice thickness so we went to the coldest city in the world with a population of over 500,000, which is Winnipeg, Canada.  And Lake Winnipeg is where they have actual ice roads, with an ice road industry, so they have an infrastructure there of ice plow drivers who clear those roads.  So that lined up well.

We asked when will the ice sheet be thick enough to take the 18-wheelers, and that was February, so that lined up for our dates with Liam Neeson’s availability.  Then we just started doing logistical studies about what it would mean to pull this off, to actually pull these huge trucks across the lake and start shooting.  Then a really clever idea was put forth, and that was to take Kenworth Cabs and mount them on pick-up trucks with a stunt driver down below in the Cab driving, so you could have the actors faking the driving in the pick-ups.  Normally with films like this the interiors of the trucks are done on a stage with the windows all green-screened, so every single shot (in The Ice Road) is real, that’s the real Lake Winnipeg out there. 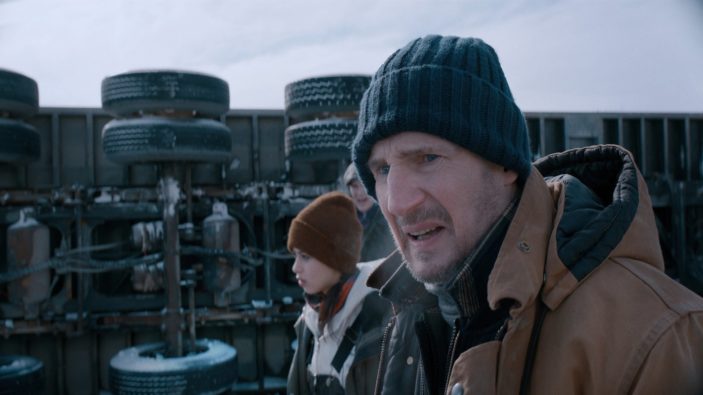 You mentioned Clint Eastwood before, and I believe your cinematographer has worked with him?

Wow, so when it comes to the crew for a film like this do you have specific people in mind, or do you use locals?

Tom Stern became available and I told the producers to do whatever they had to to get him.  He’s a legend.  Clint Eastwood loves to shoot his environments wide open with wide angles.  And I wanted to shoot like an old western, and the guy for that is Tom.  When he came on the film I thought “OK, we got a chance here” and Tom just completely embraced the ethos of the film.

Shooting in winter I imagine would have its challenges.  How was the atmosphere on set?

The first day we were out on set it was 37 degrees below zero.  It was so cold that Laurence Fishburne could hardly speak his lines, it was freezing the jaws of the actors.  The sequences of Liam Neeson in the water is really him, and that’s outside! We didn’t do a digital imprint of his face onto the stunt actor, it was actually him.  He’s wearing a survival suit, but still!

When it comes to Liam Neeson, who’s obviously well travelled in the action genre, did you have him in mind when writing the script? Or did his involvement come about organically?

I did not have him in mind.  The part was written for someone a little younger, but the script went out and I got a call from Liam’s long-term agent that he was interested, and I thought well if it’s Liam Neeson that’s a whole different kettle of fish.  I flew to New York and met with Liam, and his conviction on the material was quite high.  I was thrilled to get him, it really elevated the picture.

I appreciated the emotional aspects of the film.  You have the character of the afflicted Gurty, and then Tantoo trying to prove herself.  Were they deliberate ingredients to offset the action?

You’re making a B-movie, and everybody knows that when you’re making a picture like this.  And when I say that, I mean that lovingly.  They have certain tropes and a certain feel to them, so you want to offset those devices with good character drama as much as you can.  It’s hard to do.  I’ve struggled with it most of my career, but Im proud of the pictures I’ve done, especially those with jerry Bruckheimer, where we have legitimately good drama going on.  In the context of these action pictures it’s hard to get a cast that’ll sell the dramatic moments, but the cast (in Ice Road) really did.  I’m very proud of Marcus Thomas, who plays Gurty, that’s not easy to do what he did.

The Ice Road is screening in Australian cinemas from August 12th, 2021, Covid-pending