Interview: The Furnace actor Jay Ryan on the “tricky” filming experience and how It: Chapter Two changed his career

On the eve of the national release of the new Australian drama The Furnace, our own Peter Gray chatted with one of its stars, rising New Zealand actor Jay Ryan, about the trying filming conditions, learning new facts about Australian history, and how a horror movie changed his career.

First off, congratulations on the film.  I hadn’t heard too much about it prior to watching it, and it very much surprised me.  It’s a dark film, and the aspect of Australian history it details is one I think a lot of people won’t be familiar with.  Were the cameleers something you were aware of?

Not at all.  When I received the script from Roderick (MacKay) it just opened up a whole new world of Australian history for me.  On the first page (of the script) it states that Western Australia has one of the largest wild camel populations in the world, and I thought what was this story about.  And when I went on to read the script I was just completely gobsmacked by the story and this part of history we have little knowledge of.

You said the script was sent to you.  Did you have to audition or did they seek you out?

They asked me if I wanted to look at the role, and then I had a few meetings with Roderick and discussed the role, and his intentions with it.  I didn’t essentially audition.  I had the privilege of being asked to collaborate.

Your character is, for lack of a better word, the villain, but there’s a lot more to him than that.  Especially when it details the relationship with his son.  How did you go about approaching the role?

When I was speaking to Roderick we had framed (my character) Sergeant Shaw as the antagonist, or one of the antagonists, but we put a new lens on it as there’s only one scene that I have with Ahmed (Malek) at the end of the film, so I’m antagonising from afar.  I thought that was a cool flip on those character archetypes.  For me, what drew me in, was to see this man struggling to be a parent in this harsh environment.  In the 1800’s you don’t really get to see this notion of a struggling single father.  It’s not really part of the story you see on screen, but for me as an actor to delve into why this man was in this situation to keep his son alive, that was what excited me the most.

Did you create your own backstory? Or did you collaborate with Roderick?

I spoke to Roderick about it a little bit because it is such a vast ensemble that I didn’t want to bog him down with my character.  After our discussions, I took what he said and worked on this particular project with a woman named Brita McVeigh.  She’s a script and acting guru who lives in Sydney, and I had a couple of months before I had to be on set, so it was a real luxury to be able to delve and research into this character.  So we (Brita and I) really delved into his backstory and what had happened to this man, and it was a deep dive for me.  It was exciting to work that way because it meant any of the self-doubt you have on set wasn’t as prevelant.  You don’t always get that time to fine-tune your characters.

There’s multiple languages being spoken on screen, and I understand about 55 degree heat? How was the shooting experience?

The shooting experience was tricky, but for my part I was only there for 3 weeks, so when I came on set they had already been at it for about 3 weeks.  I came in with fresh energy, and they had been shooting in these turbulent conditions, so 3 weeks was about the right time before everyone cracked and lost their marbles.

There’s 5 languages in this film. I was only experiencing the English language, but when I got to see the film in its entirety and saw the huge effort that went into the film, and the inclusiveness… I thought it was spectacular.  Often when you watch a film that’s translated you’re looking at the images and then looking down at the translation.  But with this, you almost know what they are saying without looking at the translation because it’s in and out of the film.  Hats off to Roderick and the producers who did the work. And the Aboriginal language used in the film is a sleeping language, meaning that the last known fluent speaker of the language passed away just before we started to shoot the film. So to be able to put it up on celluloid screen is pretty amazing.

And as for the weather, it was very trying.  But for me, again, it added a layer of how these people would be feeling in this time.  We were in the spots where these real people would go about their day.  You understand why half of them went mad!  The liquid just pours through you, and then you have the insects and the creepy crawlies to deal with…we had to have a tick check every couple of hours.  So we all had this fear of the tick on set.  Going in, knowing it would be just 3 weeks, you stopped your complaining.  And my actor brain was just going “this is all good stuff”. 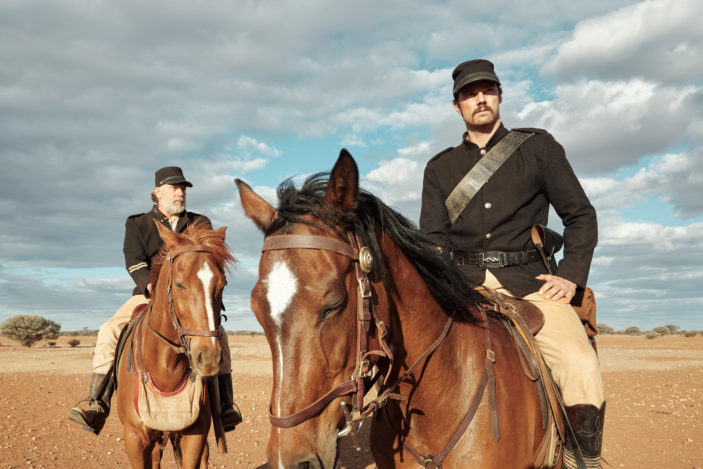 The film had its premiere at Venice.  Did you attend?

Thanks to COVID, I did not.  We shot the film well before COVID reared its head, so we were lucky in that respect, but it was more so during post-production that it started to happen across the world, so they were more concerned with the roll-out and what it meant to get audiences in front of our film.

I remember Roderick called one day during post-production, saying he was really happy with how the film was and that he wanted it to play at a top festival.  And I said “they’re all shutting down, just sell it to Netflix!”, but to his credit he held at and got it to one of the oldest, most respected festivals in history.  He’s a real trooper in that sense.

I think Venice was one of the first ‘in-person’ festivals, so that was a real honour for him.  And the film had its Middle Eastern premiere at the El Gouna Festival in Egypt, which is our leading man, Ahmed’s home country, and I was invited to go there as well – and I’ve always wanted to go to Egypt, especially with a film like this – but quarantine…so I stayed in my safe hub in New Zealand.

I understand prior to receiving It: Chapter Two that you were ready to call it a day after a long haul of auditions.  Did that film change any trajectories for you?

Definitely.  I had done a lot of television, and a scattering of film, and I had always wanted to get into film because I just love that process.  In film you get a bit more of that (collaborative) canvas.  I was about to chuck it all in.

I had moved my family with me to Los Angeles for 8 months, and I was basically saying this is my last shot.  It was a lot of no’s, again and again.  And then you’d get close and have those hopes dashed too.  It was the last 2 days of being there that I got the call to audition for It: Chapter 2, and I did my due diligence with this 2-page scene.

I researched the original actor (Jeremy Ray Taylor) who played my character (in the first film), and did it in one take. They said “thank you very much”, and I left thinking that’s another one out, so time to go home.  And I got the call when I was back in New Zealand saying they liked me, and because they didn’t really know too much about me they asked if I could send photos of myself as a kid to see if I matched up with Jeremy.  I was a bigger kid, so there was a resemblance to Jeremy in the original film, so that kinda clenched the deal.

The director really fought for me, so it was absolutely a blessing. The film really opened up a lot of doors for me, but then COVID essentially closed them all again! I had films lined up, but then silver lining of it is I’m back home, and a lot of great artists have come back home too, so there’s a lot of creating going on here.

I was going to say, because you’ve worked across the US, Canada, New Zealand and Australia. Was that a conscious decision to choose such varied projects?

I wish I could say it was a conscious decision but you really just have to go with the ebbs and flows, to go with any opportunity that comes your way.  Some of the bigger projects I definitely fought for, something like Top of the Lake was really a turning point for me.  And then of course It as well.  And from that, The Furnace and the world it created is something I’ve always wanted to play in.  It’s really just luck and preparation and being open to whatever comes your way.

The Furnace is screening in Australian theatres from 10th December 2020.