Interview: The Father writer/director Florian Zeller on adapting his stage play and working with Anthony Hopkins

An award-winning French novelist and playwright that the Times of London referred to as “the most exciting playwright of our time”, Florian Zeller has transitioned from the stage to the screen with the adaptation of his award-winning production,  The Father.  Set for release in Australian cinemas on April 1st (you can read our review here), the acclaimed drama has earned multiple accolades across the award season, with the film’s stars, Anthony Hopkins and Olivia Colman, securing Academy Award nominations for Best Actor and Best Supporting Actress, respectively, and Zeller himself earning a nomination for Best Screenplay.  To coincide with the film’s release, Peter Gray conversed with Florian, discussing the emotional experience of working with such esteemed talent and how it was to adapt his own works to film.

The film has had the most stellar reception.  Has it been quite overwhelming to hear the response?

It’s such a specific year for a film to be released.  To make a film, it’s a sum of so many parts and so many dreams, and the destination of that is to share the emotion with the audience.  So far, i’m still waiting for everyone to see it.

I understand you changed the character’s name from the play (on which the film is based) to Anthony in the hopes that Anthony Hopkins would portray the character.  How was the process in actually securing him for the role?

It is true that when I started to dream about the film I had Anthony in mind.  It was an obsession, a conviction…the reason why I wanted to make the film in English and not French.  To me, he’s the greatest living actor.  I knew it wasn’t going to be an easy dream to fulfil being my first feature as director, but until someone tells me it isn’t possible I act as if it is.  I decided to follow my instinct, and the reason I wanted him so badly to be in this was because we are so used to him playing a character so intelligent, so powerful, and what it would be like for him to be someone losing control, cause The Father is about someone losing their bearings.  I wanted the audience to experience this painful process (too) of losing someone so familiar.

The other reason I came to him was because I wanted to bring something he wasn’t known for.  I wanted to challenge him to explore a new emotional territory.  For him to go to this vulnerable and fragile place, I think it’s really courageous of him.  You know, he’s 83 years old and he could’ve done what he already knows, but he’s still an artist and he’s putting himself at risk, forced to look at his mortality.

The film really toys with the emotions of its audience.  There’s almost a thriller/gas-lighting mentality to the way that certain characters are introduced.  How did you find balancing the film’s tone?

My first idea was to put the audience in a unique position, to question everything that they are witnessing.  I wanted The Father to not only be a story but also an experience, an experience of losing your own bearings.  As a viewer it’s as if you are in the main character’s head and you’re not entirely sure what’s going on.  There’s so many contradictions in the narrative, and you have to find the right path  to find the meaning.  This was so important to me because I didn’t want the audience to just watch a story they’ve already been told. 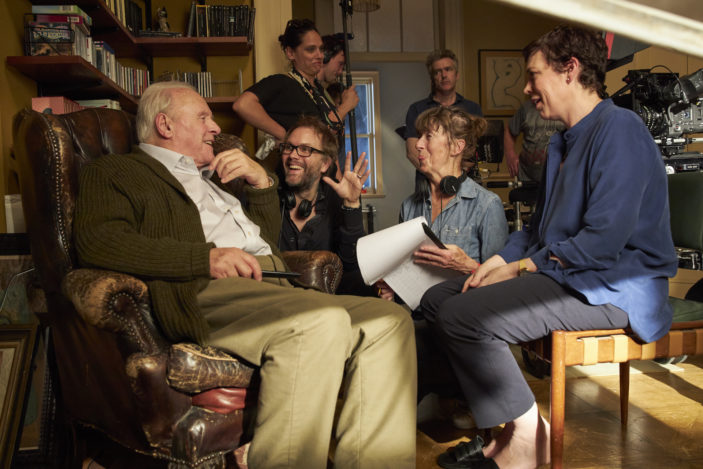 Where did the idea originate regarding changing the actors to represent Anthony’s confusion?

The Father was a play I wrote and that idea was already in the play.  What I didn’t want was to tell that story from the outside.  There are so many films dealing with dementia and they’re often told in the same way.  You know where you are and where you are going.  They can be moving or powerful, but I think cinema can provide such a unique experience of uncertainty, and I thought it would be so disturbing and strange to have the same understanding as the character.

This is your first time directing a film.  How has it been navigating this compared to the stage play?

So far my life has been about writing characters and working with actors, so in a way this was a continuation of something I knew.  But I was still jumping into the unknown, and I was excited by that but I had to remember I wasn’t filming a play.  I wanted to make a film.  I really enjoyed the process of adapting the play into a film.  When doing this, you always get the advice of filming more scenes outdoors, but I didn’t want to do that here, I wanted this to be more of a mental state.

I have to ask about that final scene.  Watching Anthony Hopkins just break down was absolutely heartbreaking.  How was that scene to film?

We were aware it was the most important scene.  If it was not as good as it should’ve been we knew the whole film was pointless, in a way.  We knew it was where we had to lead to.  At the beginning it wasn’t easy, especially because Anthony had to reconnect with something secret, something very personal, which is his own mortality.  It was not easy to do.  After several takes he asked for more time, and he went away and took some time (in his room), and when he came back he saw some glasses and it made him think about his father.  And then he thought about a lullaby that his mother sang to him, and all of a sudden he was just this little boy being transported (through time), crying for his mother to save him.  It was so powerful.  We shot the scene, and right after I yelled “Cut” everyone was crying on set.  I’ve heard him say it was easy, but that’s because he’s very humble and very British.

And next to Anthony Hopkins you have Olivia Colman.  How was it to work with her?

I have always adored her.  She’s so easy to work with, she’s very humble and has this amazing emotional intelligence.  Every time you see her, you love her, and it was the same on screen.  It’s not only about the story of the father, it’s also about the daughter facing this painful dilemma, trying to do her best.  I needed the audience to feel immediate empathy with this character, and with Olivia Colman its not hard to do because she’s so perfect right away.  Anthony is a legend to her too, so she was so excited to work with him.  They’d never met, but after only a few minutes they were so connected, she was so in love with him.

The Father is screening in Australian theatres from April 1st, 2021