Interview: The Craft: Legacy writer/director Zoe Lister-Jones on the importance of inclusivity and the authenticity of portraying witchcraft

On the eve of the release of The Craft: Legacy, writer/director Zoe Lister-Jones spoke to Peter Gray regarding the distinct feminine energy brought to the narrative, how inclusivity was an important factor, and the authenticity adhered to in her portrayal of witchcraft.

When I first heard about The Craft: Legacy I assumed it was a remake, but there are sequel connotations throughout.  How do you best summize the film?

I’m a big fan of the first film and I really liked what you did with this story.  You took it in a different direction but you stayed faithful to the original  How did this come about for you?

I was asked if I would be interested in pitching a take on a reimagining of the original (by Blumhouse) so I jumped at the opportunity.  I pitched that to Jason Blum and the original producers (of the first film) and they dug it, and I got the gig, and the rest is history.

From what I understand Jason Blum doesn’t really interfere with the productions.  He lets you run with your ideas.  It must be nice to have freedom and that much trust from your producer.

I think that’s one of the great things about working with Blumhouse is that they’re a studio that really protect the filmmaker’s vision.  There’s always a development process but I did feel very protected in telling the story I wanted to tell without too many cooks in the kitchen.

There was a greater emphasis on the mother-daughter relationship as compared to the first film.  Was that something you specifically wanted to focus on?

Yeah I did. I think anytime I approach a script I have to find a personal entry point, and when I was trying to figure out what my reimagining would be I had to get in touch with my own inner teenage witch.  My relationship with my mother is incredibly intimate and she raised me solo during high school, and had a number of boyfriends that came into the picture…and I was at an age where I was already quite vulnerable and confused.  I was trying to understand how my energy interacted with their masculine energy, and I thought that was quite a ripe area to explore a lot of (the film’s) themes.

Cailee Spaeny and Michelle Monaghan definitely had a very organic bond that showed through on the screen.  How was that casting process?

Cailee was such an incredible discovery for me.  She wasn’t my discovery, she had worked quite a lot before coming on to this project in her young life, but she’s such an incredible actress.  She just has that inexplicable stardust where you’re just so captivated by the slightest shift of expression.  She reminded me a lot of my young self, and I was putting so much of my younger self into that character, that there was this instant connection between the two of us.  There was an instant connection between her and Michelle, which was just so exciting.  We all hung out together for the first time in Toronto (where we shot) and my mom was visiting, so it was this very meta (experience) of the real-life characters meeting the fictional characters.  I think the entire cast had such an immediate bond and that is every director’s dream because half the work is done for you. 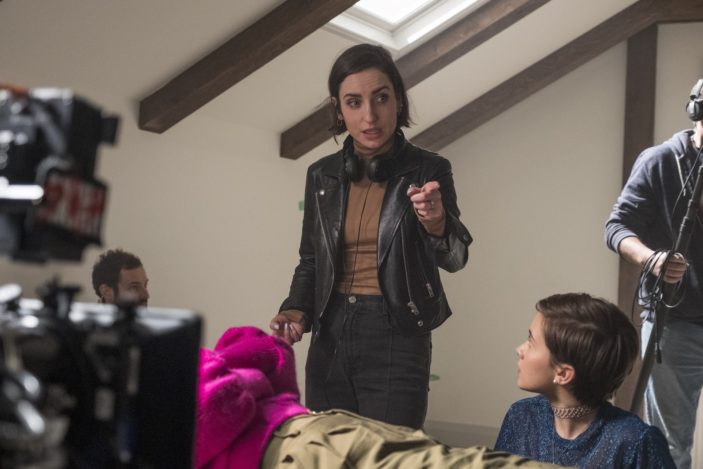 On the decision of casting, the normalising of a trans woman in the cast was obviously an important factor for you.

I wanted to make a film about the experiences young women have, and I thought it was very important to include a trans woman’s voice in that narrative.  I think in making a film that is feminist in nature that any brand of feminism that excludes trans women’s voices is not feminism, and so I wanted to really make that clear in the narrative I was trying to tell.  Representation is so important and that is all of our responsibilities as filmmakers to do.

One of the important lines, at least looking at it from today’s perspective, is “Your difference is your power”.  You touch on words hurting, girls shaming other girls, and the notion of labels and how much harder it is for men who are attracted to both sexes. It must’ve been important to comment on inclusivity and solidarity.  This very much feels like the right time for this film.

I was so excited when I was given the opportunity to make it, because at this moment (in our world) accepting difference and celebrating that within community of one another is so important in the way we heal a very broken world.  I did really want that to be a part of this story.  Also, to highlight the fact that the system that oppresses women is also very harmful to men, even though they benefit from it.  Anyone who is benefitting from the privilege of an oppressive system, it takes understanding of how that system causes you harm in order to help overturn it as an ally, and I wanted to look at that through our male characters.

How much research about witchcraft did you undertake prior to filming, and I understand you had consultants working on set? Can you talk about working with them?

We had three occult consultants who are all practicing witches.  Pam Grossman was the first witch that I contacted and she was really essential in the screenwriting process for me.  I wanted to make sure that I was portraying witchcraft authentically and that I was respecting that community.  Also looking to really subvert misconceptions around those traditions.  She was such an incredible inspiration and educational resource for me, writing all of the spells in the script too.  And then (Pam) connected me with a woman named Bri Luna, whose also known as “The Hoodwitch” on social media, and she expanded that education across cultural traditions and in consulting with the way I was portraying certain elements of witchcraft.  And then I had Erin Vogel, our witch in Canada on set with me, monitoring and making sure that we were authentic with things like the right placement of ritualistic objects on alters, and the choreography of these rituals.  She was doing a lot of energy work off camera too, making sure that when we were summoning or evoking, at the end of the day those portals would be closed.

Because I know there were some strange occurrences that happened during the filming of the first movie.  Did you have experience anything weird whilst making this?

We had some supernatural, ghostly elements in a house that we were shooting in.  I was never impacted by them but our cast definitely felt some things.  I would say in general the energy was otherworldly, and I think everyone felt that.  There was something going on on that set that was electric and really wild.

And, just lastly, apart from the male actors involved and the producers (Jason Blum and Andrew Fleming), there was an evidently strong female presence in the crew.  Was it entirely made up of women?

No.  On my directorial debut (a film called Band Aid) the entire crew was women.  On this film I brought a number of those women with me as my department heads.  My cinematographer, my production designer, my producing partner, my editor…and then I hired women that I hadn’t worked with before, so my composer and my costume designer.  There were a lot of women at the helm which was intentional, and I think necessary when we are telling women’s stories.  I like to have women telling those stories behind the camera as well.

The Craft: Legacy is screening in Australian theatres from October 29th 2020.