Interview: The Addams Family 2 director Conrad Vernon on crafting a sequel and his relationship with animated films

Writer/director Conrad Vernon and the animated genre go hand-in-hand.  As both a voice actor and a director, the former storyboard artist has left his stamp on such films as Shrek 2, Monsters vs. Aliens, and Sausage Party.

After the success of 2019’s animated update of The Addams Family, Vernon found himself back to the drawing board in continuing the adventures of the creepy and kooky family for a sequel.  Ahead of the film’s local release, Peter Gray spoke with Vernon about his relationship and subsequent start with animation, how it was getting together such an A-list cast, and what it was about the property that made him want to update it for a new generation.

Safe to say you have a great relationship with animated films.  Where did the affection for that medium start?

Oh that started a long time ago.  It became more pronounced the older I got, it wasn’t just a kids thing that I left behind.  I used to come home from school every day and there’d be a block of (programs) that I would watch.  It started with Looney Tunes and then, funnily enough, went into The Addams Family.  This was just a daily thing.  I remember watching Looney Tunes so much that when one (episode) would come on I’d say “Oh I like this one”, which means I had seen it multiple times.

When I turned 13 a movie came out called Heavy Metal, and it was rated R and it had good looking women and rock music, and I thought “I have to see this!”, but of course it was rated R… so it became this thing, this mysterious wonder of an animated movie.  I finally saw it in high school, and then when I went to college and started studying art I found a lot of what I was studying quite dull.  I remember getting quite fed up with college, thinking it was a dead end, and thought “I’m just going to call Disney and find out how to become an animator”, and I called the front desk and God bless the woman that answered the phone.  She told me a lot of the guys there went to a place called CalArts (California Institute of the Arts) and that I should check it out.  That kind of set me on my way.

Wow.  What was it about The Addams Family that made you want to make it into a feature film?

Right there I knew that people were ready for another iteration of this.  Then I thought if I made it animation it’ll take it away from the last live-action iteration, and at the same time pay homage to Charles Addams’ original designs and really make a movie that stems from what he created in the 1940’s.

I really like the visual aesthetic of these films, the way the characters are rendered and structured.  And you have these very classic characters in a modern setting, was it always the intention to bring the family into a modern timeframe?

Yeah, I think the fun of The Addams Family isn’t to make a movie about the 1960’s show.  What’s so great about them is they’re always reacting to the culture of today.  We brought them into the cell phone and social media age to see how they’d react. 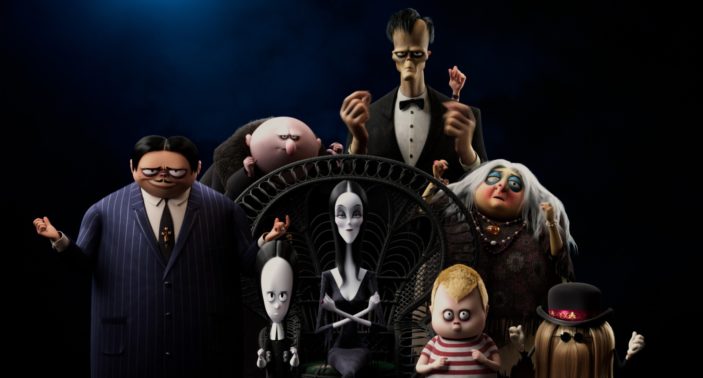 When constructing that cast did you have ideas of who you wanted?  To have people like Oscar Isaac and Charlize Theron at your disposal? How did that come about?

It wasn’t like “Let’s get the biggest people on Earth” (laughs).  It was kind of a mish-mosh of how we got them.  There were certain people I knew I wanted for certain roles and then there were others that just rose to the top.  I knew I wanted Charlize to be Morticia.  I knew I wanted Bette Midler to be Grandma.  I knew I wanted Nick (Kroll) to be Fester.  I worked with him on Sausage Party and I loved it.  I knew what he would bring into the room.  And then we looked at a lot of different Wednesdays, but Chloe (Grace Moretz) just rose to the top.  Her voice, her attitude, the way she embodied the character was great.  We started off with Finn (Wolfhard) in the first film, but his voice just got too old for the character, so now we have Javon (Walton) in there and he’s great.  It was a seamless transition, I thought.  Oscar was just an obvious choice.  Outside of the casting, people were saying “He is Gomez Addams”… so it really was just a luck of the draw that we got everyone we wanted.

Having worked with Nick on Sausage Party was there that worry that he might ad-lib outside of the realms of a PG rating? How much of it is structured scripting and how much is them going for gold?

Well I let them ad-lib as much as they want, especially someone like Nick.  He did give us ad-libs we couldn’t use (laughs), but he did watch the movie and said that it wasn’t a typical kids movie.  I like when he takes things into more of an adult realm.  Quite honestly, and this isn’t just my opinion, this is from the 25 years I have been doing this, I have witnessed that kids don’t want to be talked down to.  They don’t want only jokes that are easy for them to get.  That’s what other people think.  I know when a kid hears a joke that his parents laugh at (they) want to know what it means, why it’s funny, and what that joke is.  It brings out that curiosity.

It felt like not too long after the first film came out that sequel talk started.  When did those conversations actually begin?

I think someone told me exactly 4 days after the first one hit theatres.  It was really nice to get that kind of support from the studio.  “This is huge.  We’re gonna do another one”, and I thought that was great.  The downside to that is that they knew they were releasing within 2 years (laughs) and animated films take a little longer.

The Addams Family 2 is screening in Australian theatres from January 6th, 2022.