Despite supposedly meeting his maker at the end of The Fast and the Furious: Tokyo Drift, Sung Kang‘s fan favourite character Han Lue is back in action for Fast & Furious 9.  Reuniting with director Justin Lin and Fast family patriarch Vin Diesel, Kang’s return to the franchise has been shrouded in mystery.

As the action spectacle prepares to rev its engines on Australian screens from June 17th, Peter Gray spoke with the actor about the fan-fuelled campaign that kickstarted his return, how his relationship with driving has changed, and which Fast film he holds closest.

Welcome back to the family!

Thank you, it’s good to be back.

Bringing Han back I think surprised everyone, and the #JusticeForHan campaign had some influence in that.  It must’ve felt nice to know that there was such a love for this character.

It’s so validating as an artist that a character you play is so beloved that it merits a campaign to bring him back.  It’s very humbling.

You’ve worked quite extensively with Justin Lin.  Did he clue you in on a return or just surprise you with it?

We’re friends, we go for walks and have dinners, and talk about the magic “What ifs”.  “What if this or what if that”, but it’s all just talk.  Justin keeps things quite close to his chest until everything is solidified.  I think, until he figured it out for himself and was confident and comfortable with it himself, he didn’t want to share anything with me.  But with us, there’s so much trust because we built this character together.

Having that familiarity with him, and the fact that these characters just feel so much more defined, has there been a shift in the mood on set? More improvisation allowed?

I don’t know if there’s more allowed…Justin’s process is to always make sure the actor feels like part of the collaboration and part of the development of the character.  Once he gets a few good takes of what’s on paper he lets us go for it.  I think that’s the magic when that happens, when you take something on paper and, in that moment, you improv.  Tyrese as Roman, he does that all the time, he barely stays on script.

During production did they have to keep your presence on set quiet to ensure that wasn’t spoiled?

Oh yeah, but that’s all fun to be part of that narrative.  For the fans, to keep Han a secret, that’s all cool.  It just sucks when you’re not allowed to go to the birthday parties.  You’re at a distance watching everyone have a good time.  Other than that, it’s all fun and games. 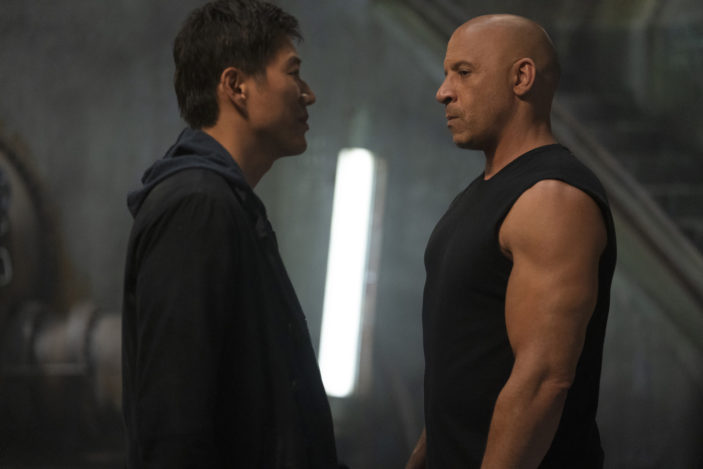 Given that these films have evolved the way they have in terms of stunts and locations, does anything still surprise you when you read a script?

Oh, all the time.  I mean, we’re going to space! Why are we doing that? How are we going to do that? Each time they keep pushing it and pushing it, and sometimes you scratch your head and think “What are we doing here?” but somehow they manage to make fun of themselves and have a good time while they’re doing it.

I think that is one of the great things about this film is that it is so self aware.

Be careful what you comment on because you might see it on screen in the next movie (laughs).

I know that it’s still early days, but has there been any Fast 10 chatter yet? Surely, with #JusticeForHan we have to some sort of face-to-face with Deckard Shaw (Jason Statham’s character).

I look forward to it.  I hope. We are still a ways away from actual production (on Fast 10), there’s been no talk of story.  Everyone is still recovering from getting this movie done, and the pandemic…everybody’s head is all over the place.

Has your relationship with driving changed since being involved with these films?

I drive slower.  I actually put a Student sticker on my car.  If people know that i’m in the car, I feel like I have a target on my back.  They’ll pull up to me (on the freeway) and say “Hey Han, let’s race, quarter mile at a time, million dollar race”… all that stuff, and people are always up on me so I put that Student driver sticker on and it keeps people away.

I did a rewatch of all the films in the lead up to this one and it’s interesting to see how the films graduated over time.  Is there any sequence or moment from the series that sticks out for you as a favourite?

That’s a good question.  Favourite moments? It’s probably Fast Five, because it really is the only film where we were all living in the same area.  After wrap we would all hang out together.  You know, we’d go to the mall to buy underwear together and stuff…so I think any time I see (Fast Five) and see all the gang together it kinda gives me goosebumps.  It was really the last time that any of us spent any significant time with Paul (Walker).  Those scenes are pretty emotional when we watch them.

Fast & Furious 9 is screening in Australian theatres from June 17th 2021.