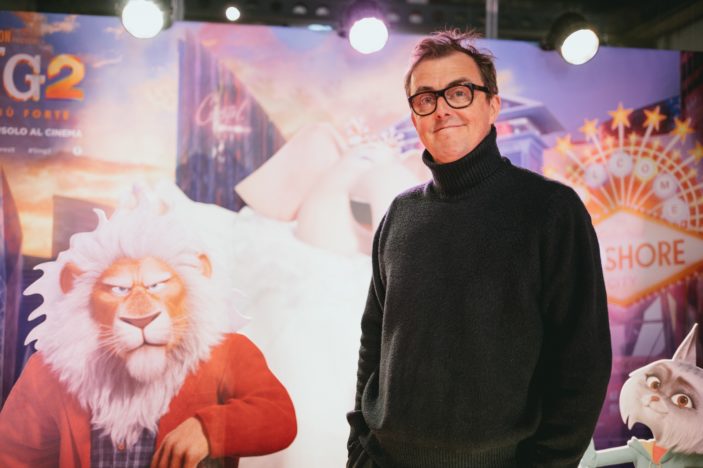 Having a background in live-action comedy films has evidently paid off for director Garth Jennings with his animated aspirations.  The acclaimed helmer of such features as The Hitchhiker’s Guide to the Galaxy and Son of Rambow, Jennings moved into animated fare with 2016’s jukebox-musical success Sing.

Now back to reunite his scrappy crew of musical misfits in their next adventure for Sing 2, the filmmaker was on hand with our own Peter Gray to discuss the origins of his comedy stylings, how it was to ensemble such a cast of large personalities, and the surprise ease at convincing Bono to lend both his voice and his catalogue to the film.

There were two sequences in this film that genuinely made me laugh out loud, probably more than I was expecting to.  Both involved the crew sneaking into the hotel…one regarding a certain eye roll, the other involving vigorous mopping.  Comedy is obviously something you feel comfortable executing.  Where did that affection for the genre originate?

Ahh yes, that sequence that you’re talking about…that’s pure Charlie Chaplin.  You’ve got a very physical setting.  No one says anything! It’s all about a very ludicrous scenario and sitting on it and letting it play out.  I love doing that, so it all becomes about the timing and the sounds.  It’s like music, you’ve got to find the rhythm for it, and it takes an awful lot of time to actually hit, but I love doing all the type of stuff.

I grew up watching a lot of Billy Wilder films with my sister, and Laurel & Hardy, and I think what I am doing is inadvertently doing things from watching my favourite comedies.

And going off that comedy, we have your creation of Miss Crawly.  Where did the idea come from to voice her, and where did she come from as a character?

She was in the first film as Buster’s assistant, and I loved the idea of an inept assistant.  I don’t know if you’ve read the book “A Confederacy of Dunces”, but there’s a character in there called Miss Trixie…and I love those characters that are kind of doddery but could trash a room!  They’re a liability but also incredibly loyal.

It started that he (Buster) would have an inept assistant, and in the process of making these animated films, before you go to the actors you test it all out yourself, it’s what we call scratch.  Everyone in the office is doing an amateur version of the script, and it’s great for me as a writer because I’m able to road-test the material.  I would do a lot of these voices, and I’d pitch it up and pitch it down (accordingly), and one of those characters that stuck (for me) was Miss Crawly.  I loved the way it sounded.  It sounds egotistical, but I never got into this to be the voice of Miss Crawly, but in trying to find the right voice it stuck and I liked it.

When you look at putting together such a mammoth cast, do you have an idea of who you want?

Yes! You always start with your dream team.  Wouldn’t it be great if…we got Scarlett (Johansson)? Sure! And it’s not just because of their status, but you just know they’d be perfect for this character.  So you can imagine how delighted I was when Chris Meledandri (the film’s producer) said wouldn’t it be great if we got Bono?  (This character) is the ultimate rock star and he’s a recluse that no one’s seen in years, and he’s enigmatic and cantankerous and wouldn’t it be great if that was Bono?  And then those songs would be amazing (too) because they’d be the emotional soul of the film.  You’d think you’d start there and see where you’d go.  We didn’t have anyone else on our list at that point, so we thought we’d start there (with Bono) and see how we’d go.  He had seen the first film and loved it.  He loved that we obviously loved music and the way we used the songs, and he could relate to this character.  There’s a lot of personalities in this film, all very different.  There are no shrinking violets here. 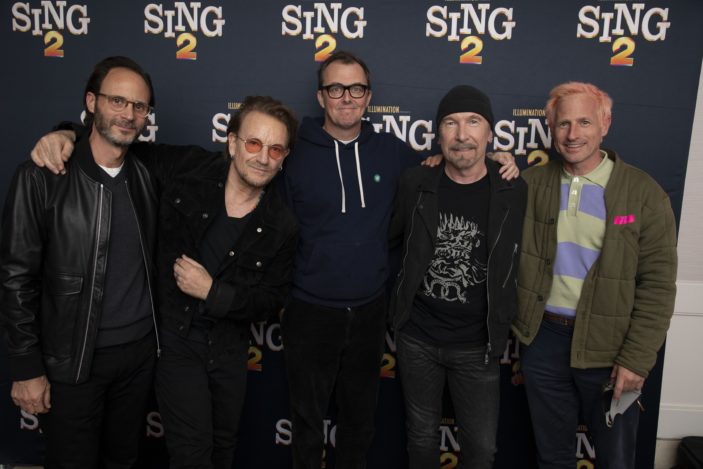 Is there a process in getting the rights to certain songs?

It’s a bit like the process I went through with Bono.  When I’m writing the script I’m often writing in what the songs would be.  “I’d love it to be this or that” is where I start, but it would often change.  I know what song should go with certain dialogue.  One of the songs that stayed was (U2’s) “Stuck in a Moment You Can’t Get Out Of”, because I knew if she (Johansson) sang this it would be all the words needed for that moment.  Other ideas you have get flipped out though, you’re just constantly playing with new things.  You hear a song and think it would fit so much better, so then you go and re-do the storyboards which might open itself up to something else.  Eventually you’re just widdling it down to that final list.

Creating something like Redshore City must’ve been a process too.  I’m assuming it’s safe to say it’s based on Las Vegas…

Oh yeah, it’s obviously based on Vegas.  I’d never been there before and went about 4 years ago on a proper location scout and I couldn’t believe it.  Even though you see it on television…I kind of thought it would be like the Mona Lisa where you think “I don’t need to see it, I know what it looks like”, but then I got there and, my goodness, the scale!  Being in a hotel that takes 20 minutes to get from the lobby to the theatre and you’re still in the same hotel?  I’m not dawdling either, I’m marching…

And then “Oh here’s a chocolate fountain” or here’s the flippin’ Venice canals…just mind-blowing.  So we thought (the characters) are coming from a small town let’s give our audience that feeling of “You can have it all!”

I know the costumes for this film was a collaboration with the label Rodarte.  How was that conversation? Did you reach out to them to offer the film?

That’s a good point, yeah.  Chris Meledandri, the CEO of Illumination, is always meeting with people that he’s interested in, and they can be from any walk of life.  They don’t have to have anything to do with films or any of that stuff.  For one reason or another Rodarte met with him and they were just chatting, and at the end of the conversation Chris called me and said I should meet with (founders) Laura and Kate Mulleavy.  We wanted to raise the production values of this movie and at the end of this movie we wanted these characters to have great costumes, so why not just see if (Rodarte) would be interested.

I remember meeting with Laura and Kate and immediately hitting it off, and they would say “Oh, you could do this” and I would love that (suggestion) and off we went! They were amazing to work with.  And then working with the dance material, it was with Sherrie Silver, so it was amazing to work with all different people from the arts who could filter in their talents to this one movie.  It’s a great big melting pot of creativity.

Sing 2 is scheduled for a release in Australian theatres from December 26th, 2021.