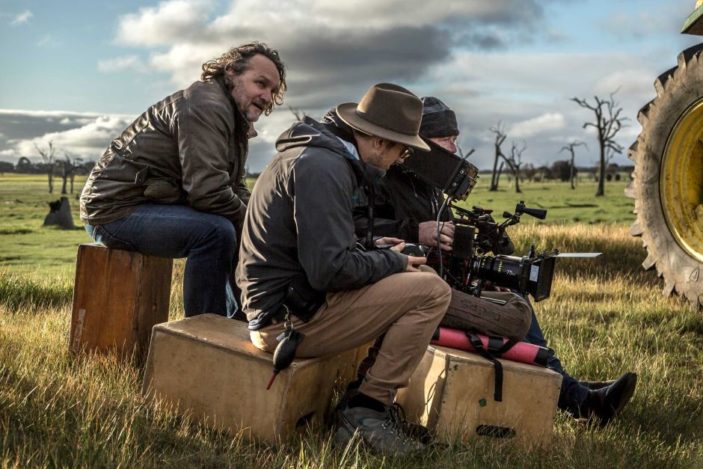 With the imminent release of Rams set for Australian audiences, director Jeremy Sims has been discussing the film and what brought him to reinterpret the original Icelandic drama.  Our own Peter Gray chatted with Sims, learning of his approach to directing, how he has found the film’s reception so far, and why he had to have “the bad Michael Caton”.

I understand it was during the promotional tour for Last Cab To Darwin that you saw the original Rams? How long after seeing that film did the idea of reinterpreting the story happen?

It was a couple of years. (Producers) Aidan (O’Bryan) and Janelle (Landers) saw it on the festival circuit, they had another film they were shopping around at Berlin.  They hung out with Grimur (Hakonarson) and said they were thinking of doing an Australian remake of his film, and it progressed from there.  Not long after had they seen Last Cab To Darwin I think they thought I’d be the guy to do it, but they were waiting until Jules (Duncan) had written the script before saying what they wanted to do.  The script was lovely, and I looked at what I loved about the original and what did I want to know more about.  I felt like I wanted to know more about the (secondary) characters.  You met them at the beginning with the sheep show, you met the next door neighbour – who was just a fascinating creature – and you met the vet briefly, but I felt those stories didn’t go anywhere.  So I felt you had to build on that world, and that’s something I like doing in my movies is building a real community.  Once Roadshow was on board and we ticked all the boxes for Screen Australia…then it got serious.

The core relationship between the two brothers (Michael Caton and Sam Neill’s characters) is quite universal.  Did you find it easy to change the film’s original Icelandic countryside setting to a more rural Australian outback?

Yeah, I mean you look at Cain and Abel and the fact that every culture has stories of two brothers.  They’re usually two princes and they have to work out how to divide the kingdom between them.  It’s certainly a story that stems from the patriarchal set-up, that European model of inheriting from your father, and if you listen closely to this story, to Michael Caton when he’s pissed and walking down the stairs he says “This is mine, not yours”.  The story that we made up in our heads is similar to what I think Grimur had in his head, in that the older brother goes away and lives his own life, eventually coming back to the farm expecting to inherit it, and the younger brother who stayed and helped his father basically says “No, you’re not getting it”.  I have a relationship with my sister where we might not speak for 5 years, and everyone I have spoken to has mentioned that they have a similar relationship with one of their family members, so I think it’s universal on that front.

You’ve certainly given Michael Caton some dramatic material to chew on between this and Last Cab To Darwin.  Was he always who you envisioned for this film?

The producers were actually speaking to him about playing Colin (Sam Neill’s eventual character) and I thought he just can’t play that role, it’s just not him, we need someone else for that role but he should absolutely play Les, because that’s the “bad Michael”.  I never contemplated having it the other way around.  I had just seen Hunt For The Wilderpeople with my kids and I thought (Sam Neill) that’s who should do (Colin).  We were so lucky, because so many people said no for him, and I knew that if I could get him to read it and have lunch with him then I could take it from there.  It was a big job for him because he’s just about in every scene, he didn’t have any days off…and if you look at his body of work he actually hasn’t had too many lead roles.  I went back to My Brilliant Career and he isn’t the lead in that, Jurassic Park he was supporting the dinosaurs…so I think anchoring a film was just as interesting to him as well.

As an actor yourself, do you approach directing differently?

No, not really.  To be perfectly honest if you look back over the history of cinema there’d be 30-40% of directors who were once actors, or at least dabbled.  It’s a very natural path to do it.  It definitely gives you some advantages over people that have been first AD’s or directors of photography, but nowadays people just say they want to be a director, where as 30 years ago you had to do something else to learn the business.  From my perspective, a long period of acting has helped in knowing what I don’t like.  Most directors are terrified, trying to find a way around saying something directly like “Can you do it faster?”, and after a while you’ll say “Should I just do it faster?” and they’ll happily agree to it.  I think most actors that work with me appreciate that.  “Just get the fuck on with it”.

How has the response been so far? It must be nice that it’s earning a cinema release during these times.

Yeah, it’s been on the shelf for quite a while and because it’s a little film – only about $7 million to make – going straight to streaming was certainly a possibility, so it’s really a great show of faith in everyone that Roadshow are looking at it as something that could potentially make them money.  That’s why it’s coming out now, that’s why it’s going out on to over 260 screens..it’s because they saw it and thought people will want to see it.  And that’s great, that’s what I do for a living.  I don’t want to make arthouse films that no one will see, I want something that’ll play to a broad audience and within that try to be beautiful, and subtle, and real.  A bunch of my friends went to see it the other night and took their kids, and they’re aren’t too many films you can do that with.

Rams is screening in Australian theatres from October 29th 2020.