The last time Peter Gray spoke with Australian actress Radha Mitchell, the two discussed a considerably controversial film detailing female revenge in the aftermath of assault.  Narratives couldn’t be any further removed from each other with Blueback, an adaptation of Tim Winton’s acclaimed short story that follows a young girl who befriends a magnificent wild blue groper while diving. When she realizes that the fish is under threat, she takes inspiration from her activist mother and takes on poachers to save her friend.

As the film sets its release in Australian cinemas from New Year’s Day, Radha spoke to Peter about willing the film offer into existence, the terrifying reality of having to face her deep water fear, and what she learned from working with fresh, debut talent.

I spoke to you earlier in the year for Asking For It.  Couldn’t be talking about a more different project here.  I saw Blueback at TIFF, and on top of just being excited to see an Australian film there, do you feel as if there’s a different reaction from international audiences? And have you spoken to Australian audiences to gage that difference?

Tonight we’re going to see a screening with two Australian audiences on the one night, so that’s exciting.  I’m bringing my mum along (too), which is meaningful to me.  I don’t know what I’ll presume it to be.  You were there in that audience at Toronto and I think people were quite moved by it.  Especially women.  I predict it’ll have the same effect on any audience.  It might be more intimate for people who are from Western Australia.  I think it’s a very specific kind of touchstone if someone’s from that area.  I think it’ll transcend culture.  It’s just very primal with (its) storytelling.

With Australian films and international productions, do you find there’s a different mentality on set?

Yeah, I think Australians are more laid back about how they do things, in a general sense.  I guess it depends on the project, but a lot of American things can be very uptight.  Not that last movie we discussed (Asking For It), which was so loose.  Couldn’t be looser.  It really does depend on the scale of the project.  I think it’s more the budget of the project in general.  The more money involved, the more uptight people are.  That’s just the general rule.  It doesn’t really matter about the culture.

What drew you to Blueback?  How did this project come about for you?

I was coming back from the US during the pandemic.  I was staying in a hotel.  The Ibis.  I don’t know if you know this hotel, but the rooms are very small.  When they shut the door I had a panic attack.  I was thinking “I don’t know how I’m going to do this.”  It ended up being a nice kind of break from everything (though) and during that period I thought how great it would be when I got out of here if I got a job in Australia.  Wouldn’t that be nice? There’s no COVID out there.  I could see people walking around out of my window in this free world.  I had come from post-whatever that election and the insanity of that.  So (Australia) looked kind of utopian.

In the midst of that I get an e-mail saying “Do you want to come and do this movie with Robert Connolly?”  I read the script and it was a bit like of how I imagined it and now it’s here on the table.  I was very, very lucky to get that job immediately.  More to the point, I was just so moved by the story and so aligned to the kind of the storytelling.

When you read the script and realised how much you had to be in the water…did that scare you in any way?

So that was the one thing I didn’t mention.  I loved the role and I loved the character, but I had this phobia of deep water, which I had acquired because I was never that great of a swimmer.  I went to this wedding in Fiji once and they were inspired to go whatever-diving with, like, 30 minutes training.  I was down there and the fish were amazing, but I had this panic attack.  I needed to get out.  The other person (I was with) was down there for like an hour or something, but I had to be removed from the water and was never going in again.

So the movie was presenting this opportunity to embrace that fear and face it.  Unbeknownst to me, it gave me this experience of breath control and how much sensitivity or how heightened your experience can be when you’re holding one breath.  We were so lucky to have these expert divers around.  Some of them could hold their breath for six minutes.  It was an amazing experience.  We engaged with real creatures under the ocean (and) it was very invigorating. 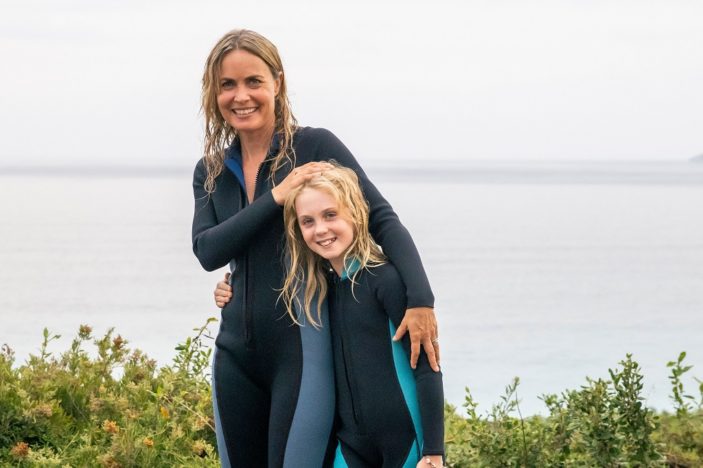 Were you disappointed that Blueback wasn’t real?

Actually, I thought it was great.  This puppet looks so real, you know.  Those were the sequences that were (shot) in the swimming pool.  After we shot the film I knew the fish was going to be the star of the movie.  They could forget us, the fish is going to take these scenes.  He was like a real fish.  They had these three amazing puppeteers above.  I think the charm of the story is that it doesn’t try to create like a Finding Nemo-type of talking fish.  It’s a real creature.  He engages your attention.  You feel for him.  You get quite involved in his experience, even though it’s a very fish-like perspective that he has.  He doesn’t pretend to be human.

I think having the puppet helped with that, because it was something real for us to act with, as opposed to CGI.  I’ve done so many scenes, especially in horror films, where I’m screaming and reacting to nothing.  We had real feelings for him.

So many of your scenes are with Ilsa Fogg.  How was it working with someone so fresh in the industry? Did you impart any of your wisdom onto her?

I feel so guilty because people asked me if I shared any wisdom with her (and) no, I didn’t (laughs).  She shared some wisdom with me because she grew up on the beach and her mum was with her on set, so there was this beautiful dynamic between them that I could just witness.  She was very authentic to the character.  In terms of place and time, I could reference things to her, but she had this amazing competence for anyone just walking onto a set and acting for the very first time.  She seemed to just take it all in her stride and be very relaxed and just in the moment.  Maybe she was teaching us all something by just being so cool.  She was really cool.

And because so much of the film is that mother-daughter relationship between your characters, was there much time for you to bond outside of filming?

We did.  We did a bit of swimming.  We learned how to drive a boat and just free dive all around the port.  We got to swim with, like, I don’t know, 50 seals or something at this one spot.  It was just this great bonding day before we started shooting.  We had time to travel around and we got to hang outside of the movie.

Then we were on set every day, so we didn’t need to see each other too much after set.  If you’ve ever been to Bremer Bay, there’s nothing there.  Like one restaurant, so we’re all in each other’s business.  It was giving school camp kind-of vibes.

It really is a beautiful film.  I’m just so excited that it’s getting a theatrical release, because it deserves to be seen on the big screen for the cinematography alone.

Ultimately, it’s a family film.  I think what you didn’t feel in the Toronto screening was the kids in the audience, you know? Yes, women were having a real connection to it, because it is so female, and someone was telling me that it tugs on the umbilical cord, which is a weird way of describing something (laughs), but with kids there’s a different dimension.  I think kids are going to be really engaged.  It does have that adult thematic, there’s something that’s going to engage adult audiences, but I think the purpose of the film is that it’s a family movie you can take everyone to.