Interview: Nick Kroll on enjoying the free rein of voicing Uncle Fester in The Addams Family 2

Despite his prolific status within comedy, chances are you’re likely to recognise Nick Kroll‘s voice before seeing him in person.  Biding his time between family fare – just this last month he was heard as Gunter in the animated Sing 2 – and more adult aimed comedy – if you’ve laughed at either Coach Steve, Maury the Hormone Monster or Lola on Netflix’s Big Mouth then you’re enjoying his work – Kroll’s latest role is a mixture of the two, voicing the ghoulish Uncle Fester in the absurd, supernatural animated comedy sequel The Addams Family 2.

As the film releases across Australia this week (it’s scheduled for January 6th), Peter Gray spoke with the actor about his voice work and the process of recording on his own, how he felt voicing a character as a fan of the The Addams Family, and the freedom that comes from working with directors he can trust.

The Addams Family was something I very much grew up watching, especially the live-action films from the 90’s.  Was it a property you were a fan of?

Yeah, absolutely.  I grew up watching the original sitcom from the 1960’s on re-runs, and then when Addams Family Values came out in the 90’s, it was a big movie for anyone around our age.  It was iconic.  So when they came to me about (voicing) Uncle Fester in an animated version, it was such a no brainer.  I didn’t want to ruin all the great work that came before me, but it was an awesome opportunity.

Did you have to stop yourself from emulating someone like Christopher Lloyd (from the live-action films)?

I went back and watched his work, and the work from the show, just to remind myself of it, but I built a voice that both felt like one that was in the same universe as what they had done but also entirely separate.  It felt like my own.  Often times, more for me, I want to make sure it doesn’t sound like something I’ve already done.  It’s always helpful at the beginning of each session for them to play back what I did the last time which cues me back to what my voice should sound like.

I imagine voicing someone like Fester gives you free rein to be as wild as possible – within the PG rating.  Was that an appeal in taking on the role?

Yeah, that’s one of the fun things about The Addams Family.  It’s a fun movie and it’s PG but it also still has a little bit of an edge that other family movies don’t always have.  You can be a little more subversive with it than other family fare.  That’s really fun.  I like doing a straight-up kids movie, but my sense of humour inherently always goes a little edgier.  This was a perfect opportunity to play with both of those elements. 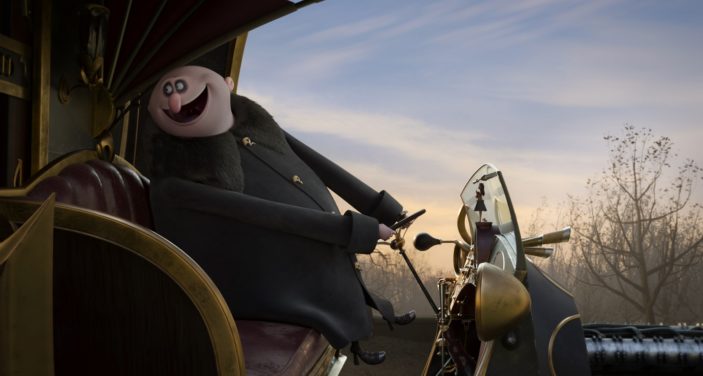 Coming back for this sequel you have the same directors and same cast.  Did that help in feeling comfortable in going a little bit further? Knowing it was the same environment?

Yeah. I think when people hire me to do something they know I’m going to bring some ideas to the table, and I don’t mind if they don’t use them.  I always tend to do that, and having worked with these directors before on Sausage Party they knew I was going to bring some jokes.  Often times they’ll make it in, which is cool, but if I just say what’s on the page then I’m happy to do my job and go home.  Improvising and ad-libbing keeps it exciting and keeps me on my toes, even if they don’t use it.  It keeps me literally animated.

I was going to ask about improvising and that sense of freedom.  Because the camera isn’t on you, can you just go for as long as you wish?

Yeah, you’re not worried about lighting and all those elements of live-action that make it complicated.  Even something as simple as other actors and hitting your mark, or a crane shot, or losing light… the thousand elements that take live-action quite some time, you just don’t have that in the voice-over booth.  (Animation) allows you to really dig in and go over line-by-line.  When I record I’ll read the whole scene through, but then I’ll go line-by-line and quite often give three different versions of the same line.  There’s an incredible latitude one is given when doing a voice-over performance that you just can’t have in live-action.

Are you ever bouncing off the other actors? Or is it quite singular, just you in your booth?

In film it’s usually always on your own.  On Big Mouth, before the pandemic it was much easier, but we tried to get people in the same room at the same time, because there is something that happens when you’re improvising comedy (with another person).  If I ad-lib something or add a piece, the next time they record Oscar (Isaac) or Charlize (Theron) they’ll add that line of dialogue in and make sure their reaction makes sense.  There is something about getting people in the same room, but (in film animation) that’s how you can get such a stellar cast together because they can just record it on their own when they’re free.

The original film came out at the end of 2019.  With this film, was this produced entirely throughout the pandemic?

Not being on the production side and only on the voicing side of it, I can guarantee that there were production logistical scenarios that needed to be addressed.  I can speak to that more from producing Big Mouth and its spin-off, Human Resources, in that it was a blessing that animation could continue immediately in a way that live-action couldn’t.  It required a lot of problem solving.  The easiest part of how do you record people remotely often led people to being their own engineer.  That’s easier to figure out then how do you have your own editing session all online? I assume that’s everything they had to deal with.

The Addams Family 2 is screening in Australian theatres from January 6th, 2022.