Interview: Kajillionaire writer/director Miranda July on creating such a distinctive film and how her cast imprinted on the material

As her critically acclaimed film Kajillionaire arrives in Australian theatres (read our review here), writer/director Miranda July spoke to our own Peter Gray about what drew her to create such a distinctive film, how star Evan Rachel Wood imprinted on the material, and the irony of releasing such a thematically anxious film in 2020.

Kajillionaire is, by far, one of the most unique films I have seen, so I just want to extend my congratulations on the film itself.

Oh, thank you so much.

I know there was a bit of time between this film and your last, but you’ve kept yourself busy with art projects, your app (‘Somebody’), and becoming a mother.  Why was Kajillionaire the next Miranda July film? How did this idea come to be?

Among the things you mention I also wrote a novel, “The First Bad Man”, and I remember writing it thinking how many twists and turns were in it…and thinking it’s too bad that this isn’t a movie.  But the second I was done with it I started thinking what I would do for my next movie, and for a while I was circling these ideas around parenting, birth and rebirth.  There was something there, but it wasn’t until the family of con-artists came into my mind that I thought I had a fiction that could hold all my feelings.

Because I understand that watching episodes of Mission: Impossible when you were growing up paved the way for Kajillionaire in some respects.

Yeah, I had that language in my back pocket in a pretty deep way.  The anxiety of Mission: Impossible kind of reminded me of the anxiety of my family.

The character of Old Dolio is, like the film, just such a unique presence and Evan Rachel Wood is so incredible in the role.  Was she someone you had always envisioned?

I don’t write with anyone in mind, and then it becomes this crisis of “Oh no, this isn’t a novel,  someone has to do all of this” and i’ve always thought of her as such a good actress, so it was more of this hope that when I had dinner with her I was just thinking “Please be a little bit like Old Dolio”.  I had no idea what she was like and Evan was more than just a little like (Old Dolio), she made herself so vulnerable to me and showed me how genderless Old Dolio was. 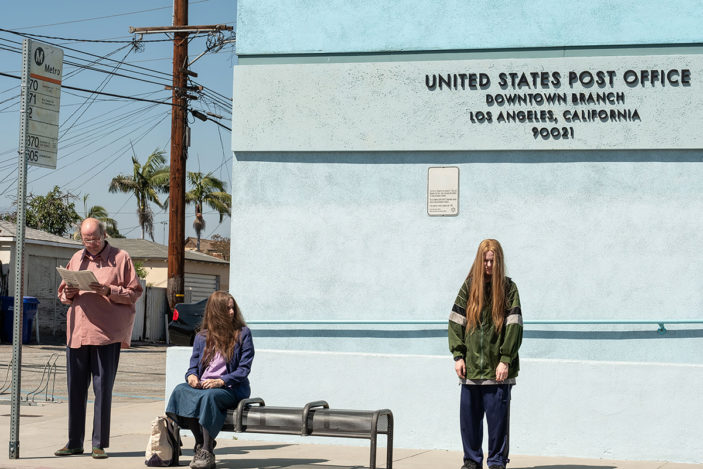 I was going to mention how genderless she is.  Was the walk and the voice of Old Dolio a collaborative effort between you and Evan, or did she come up with that on her own?

That was a collaboration.  Some of it was in the script, some of it was in my head.  The voice though, one day Evan dropped her register, telling me how this is her more natural tone and she had trained it to be higher with a vocal coach.  And when I heard that I jumped on it! I felt like I was getting this special thing.

As a gay man, I really appreciated the subtlety and organic nature you gave to the relationship between Old Dolio and Melanie (Gina Rodriguez’s character).  It was really beautiful to watch.  Was that relationship always going to be a facet of the narrative?

Melanie was in the story for about a week before I really saw anything.  It was the sparring between the two of them, and the fact that Old Dolio was so bothered by her that made me follow the characters and show that Old Dolio was feeling things in her body that she doesn’t understand.  And I was so happy that I could give her this love story.  I always said to the actors that if Old Dolio was played by someone like Ryan Gosling, you would know from the second Melanie came into the film that they were going to hook up.  And I knew that we could play against that.

You reference “the big one” throughout the movie, and there’s so much anxiety that runs as an undercurrent for so many of the characters.  With 2020 being the year it has been, how have you found people’s reactions to the film given how timely it is?

That’s been a bit of a trip.  I remember the moment saying to my producer “Oh, I think we’re in the big one right now”.  We were worried throughout shooting about earthquakes because it was Los Angeles, and there was one right before we started, but I think it’s made parts of the film that felt very personal to me and to my anxiety suddenly not so personal, or at least part of an intimacy that we now all share.

Given how well Kajillionaire has been received, and you’ve had one of your other films (2005’s Me and You and Everyone We Know) been given the Criterion Collection treatment, it must be something of a silver lining to a year such as this?

Yeah, there’s something almost bittersweet about it, but I do feel grateful.  I think in a year like this that it’s good to let go of the trappings of success and realise that the most important thing is just connecting with people.