Interview: John Leguizamo on playing Violent Night‘s villain; “The most fun you can have as an actor is chewing the scenery and having tantrums.” 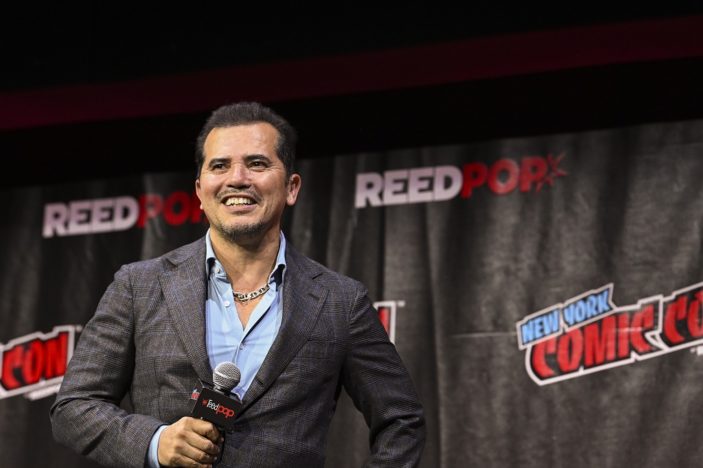 As Violent Night looks to spread some seasonal beatings this year, Peter Gray spoke with the upcoming shock comedy’s own Grinch – John Leguizamo.

From 87North, the bare-knuckle producers of Nobody, John Wick, Atomic Blonde, Deadpool 2, Bullet Train and Fast & Furious Presents: Hobbs & Shaw, Violent Night is a coal-dark holiday action-comedy that says you should always bet on red.  Leguizamo stars as Scrooge, the leader of a group of mercenaries who takes a wealthy family hostage over the holidays, unaware that Saint Nick (David Harbour) is anything but, and has a naughty list with Scrooge’s name all over it!

In between a little fan-boying over growing up with Executive Decision on rotation in his household, seeing Carlito’s Way when he was far too young (“You were precocious, you couldn’t help it”)  and thanking him for his performance in To Wong Foo, Thanks For Everything! Julie Newmar (“That film gave people courage to come out to their parents.  That was special for me.”), Peter spoke with John about improvising on set, how he felt knowing people were rooting for his demise, and his own assurance in maintaining the danger when playing a villainous character.

One thing about your career is that you have very much opened yourself up to every genre.  With a stand-up background, was comedy always something you saw as your go-to?

Yeah, comedy was the thing I loved most when I was coming of age here in the United States.  It’s what I wanted to (do).  It came the easiest to me.  I love drama too.  I studied acting with some of the great teachers in America, but you know this is my favourite genre, this sort of dramatic comedy, that I don’t think a lot of actors can do.  But I can do it.  I find it really exciting that I can excel in it, like in The Menu and this, where it’s comic but there’s a lot of drama.  It has to be real.  It’s really challenging and difficult, because I have to maintain the tension.  I have to maintain the danger.  I want to be funny, but I can’t be silly or clownish.  I have to be witty to maintain the danger, you know what I mean, or the whole thing collapses.

That sensibility of being funny, but also quite terrifying, really shines through.  Was there a lot of room for you to improvise?

Yeah, well, the writers wrote a beautiful script.  And, I mean, it’s incredible what they wrote.  An anti-hero Santa Clause.  A villain that you somehow understand.  But you don’t love (my character).  You can’t love him because he’s trying to destroy Christmas and kill Santa (laughs), but you kind of understand somehow where he’s coming from.  I think Tommy Wirkola is brilliant.  What a joy to work with this man who’s a writer, a creator, a director, and he respects actors.  He gives us this safe space to improvise and try stuff.  We had a ball working together.  It was so good to be off camera, because you could laugh.  Otherwise, you have to stay there and grimace and try not to laugh.  We broke each other up.  There’s a lot of times we couldn’t roll because we couldn’t keep our shit together.

Do you find there’s more freedom in playing a villain?

I don’t know if it’s more freedom.  It’s more fun.  I mean, the most fun you can have as an actor is chewing the scenery and having tantrums, and they’re paying you, you know? (Laughs).  It’s fun to just vent from all the shit you’ve pent up over the year.  From the pandemic to this crazy political scene here in America. 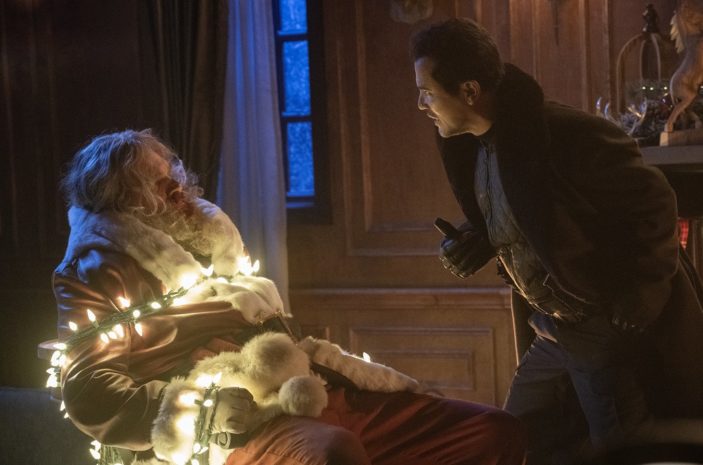 The film really goes for it in terms of its violent set-ups, but also in embracing the Christmas spirit.  What was your first reaction when you read the script?

First of all, I was laughing out loud, which doesn’t ever happen for me when I’m reading a script.  It was a page turner (and) that’s also unique.  So many scripts that I’m reading I’m like “Oh God, I need more coffee” or “I just can’t with this one…” (but) this one they really went for it.  There was no fear.  No holding back.  And I think Tommy is really the only director who could have done this sort of violent funny tone (but) then sucker punch you with emotion at the end.  I didn’t expect to be so moved.  I was like “Wait a minute.  I’m about to cry?”

Had you seen much of Tommy’ work prior to this?

I had seen two of his films, yeah.  Hansel & Gretel, and the last one he did where the couple go on vacation and they tried to kill each other (laughs).

I have to say your chimney scene is spectacular!  Is that the kind of stuff that you read on the page wondering how this will come to fruition?

There was no indication (in the script) that it was going to be so horrific.  There was no clue.  When I saw it I was shocked.  Tommy told me they tested (the film) and the audience screamed! And then I went to Comic Con in New York City with 4000 people (and) they jumped to their feet.  There was that conflicting emotion of they’re rooting for my death, but I guess I did my job right (laughs).

I think if you have a crowd cheering for you as a villain then you must be doing something correctly.  And, on the back of that, to play this film to that reception in a full cinema, it must feel pretty great that the cinema experience still feels alive during these times?

Yeah, I don’t think cinema in the theatres can go away.  You can watch this at home and you’ll laugh, but you’re not going to roar and laugh!  Not the way you laugh in a community.  When I hear other people cracking up, and I’m cracking up, you laugh more.  It becomes infection, that kind of communion.  You want to look around and have everybody see you.  That kind of thing can’t happen at home.  It’s a shared experience, and it becomes something that stays in your mind forever, as opposed to when you watch movies at home and you’re like “Next!”

Violent Night is screening in Australian theatres from December 1st, 2022.