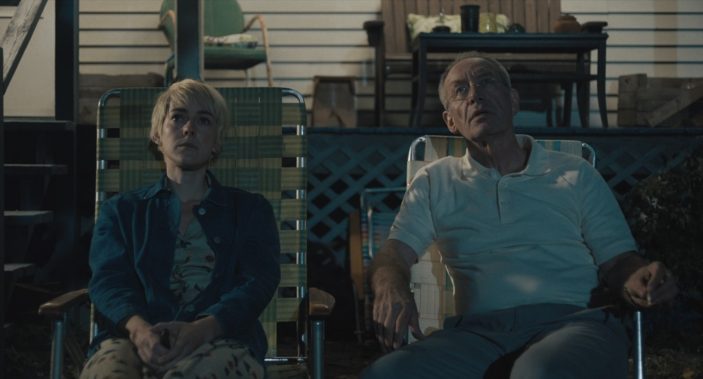 Fired from her seventh job in two years and estranged from her family, Audrey (Jena Malone) is restless and dwells in a distinctly modern solitude, relying on YouTube for companionship. After falling down a video rabbit hole, she discovers the world of adult adoption and decides to try it herself in hopes of finding a sense of belonging. Audrey soon finds is an adoptive family whose dysfunction mirrors her own, allowing her to form an unlikely bond with the cantankerous patriarch, Otto (Robert Hunger-Bühler), who is seemingly as cold as she is courteous. Writer/director M. Cahill said, “A few years ago, I met an adult woman (Jenna MacFarlane) who made the remarkable decision to put herself up for adoption with a new family. The more time we spent together, the more I felt that hers was a story that needed to be shared.”

Based on an incredible true story, Adopting Audrey is now impacting theatres in the United States, as well as on VOD and Digital.  To coincide with its release, Peter Gray spoke with actress and producer Jena Malone about the important awareness of such a movement as adult adoption, how her own personal shift aligned with the film, and the value behind a movie’s eternal shelf life – including her own.

The story about Jenna MacFarlane’s own late-in-life adoption was not one I was familiar with.  I don’t know if it’s just because I’m in Australia, but it was not one I heard of.  Her story, as well as just the general idea of adults putting themselves up for adoption was something I had no awareness of.  Had you heard of Jenna’s story or anything similar prior to this film?

Neither.  I think it’s similar here in America, that it was just not a known thing.  Mike Cahill, who wrote and directed this film, I think he read the article (about Jenna) in, like, 2007, and just sort of tucked this story away.  I read the script in 2015.  He definitely spent time with this story, and even from when we made it in 2019 to now, I feel like the conversation has furthered.  There was a docu-series called Adult Adopting Adults, or something, and there’s all these other aspects (now) around the legality of it, and the trust and the money, and people not being legitimate about their want for adoption.

(Adopting Audrey) is definitely about a woman who wants to be adopted, but it’s more the adoption is just a sort of apparatus.  That’s (her) connection.  It’s less about legally being someone’s child.  It’s more, how do we have a conversation of community care? How do we step out of our deep self reliance, or DIY, or death? You know? Let’s end this product of grind culture to allow more conversation.

Audrey, in her disassociated state, consumes digital content, which is what we all use for rest or to generate ideas.  But how do we disassociate ourselves from (that) world? We recharge by turning to our digital apparatus, and (Audrey) receives this information (about adoption), which is previously unknown to her.  She then uses this apparatus to explore this really important part that doesn’t get much exploration, which is community care.  I love that it’s using something that we really need, but in a very subtle way.  But then it’s also using something that’s very real to allow legitimacy into this story.

It really is one of those things where truth proves stranger than fiction.  When I heard of this film I had an idea of where I thought it could go.  I thought the legal aspect was going to be something explored.  I really liked that the film focused on your character, this kind of nomad, who just wanted connection and found it in an unorthodox manner.  How did you become personally involved?

I just read the script.  Mike sent it to my agent.  It was all very traditional.  I read it back in 2014 or 2015, signed on, but then nothing happened.  It just couldn’t find a home.  It’s a very traditional path for an independent film.  You can love the script, but there’s no money or place (for it), so it can take a long time to find a home.  When it came back around, I felt like I was just in a different embodiment.  I was a mom and I was just wanting different thing.  Mike had actually done a complete rewrite of the script and made it a thousand times better and deeper.  Kind of simpler.  I really liked where he was pushing it.  It all just lined up.  It was the last thing I did before the pandemic hit. 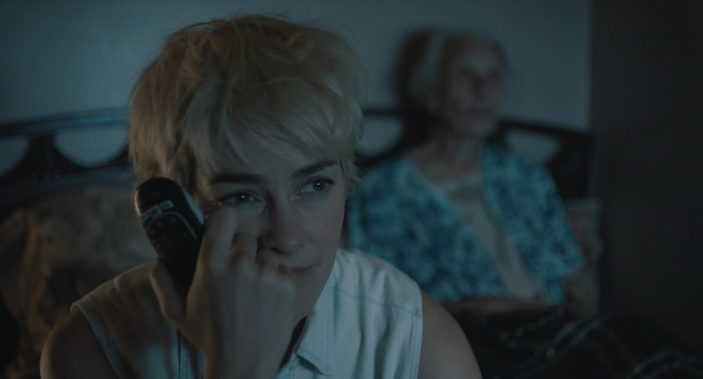 The relationship between Audrey and Otto really is the heart of this film.  Prior to filming, did you and Robert Hunger Bühler spend any time getting to know each other? Or did you let the relationship play out on screen similar to your characters?

Well, Robert almost didn’t join us because he was coming from Germany.  He had a very hard time getting a visa, so he joined us two days before we started shooting.  It was almost like the film wasn’t going to have an Otto for a second, so we didn’t have a lot of time to rehearse.  Mike never wanted it to be about actors rehearsing together (though), but rather building relationships with each actor, and then allowing the actors to kind of just meet on screen.  I think that aspect of limiting rehearsals worked well for the story.

That final moment between Audrey and Otto is my favourite of the film.  I love that you had created a shorthand by that point, and you can sense that genuine concern from him.  Was there a character moment for you that you favoured?

I just know that Otto is my favourite character.  (Robert) has done such an amazing job.  Otto is going to go down in history for me as one of the characters I love.  I want to be around him all the time.  It was just a joy for me to get to see that character develop, and then how he touches and changes Audrey.  We actually re-shot the ending.  The way we had originally done it wasn’t working, so we came back after the pandemic hit and did it again.  It’s a tricky scene.  Endings are always hard.

On the mention of favourite moments, I feel like every few months on Twitter the shot of you running towards the medicine cabinet in Contact is passed around, highlighting the absolute camera mastery of it.  It got me thinking about your previous work and if you’re seeing a sense of awareness being brought to older titles due to an increase now in social media and streaming services?  Personally, if more people knew that Sucker Punch was great we’d be better off.

I agree (laughs). Yeah, I’m seeing that.  I feel like that’s always been the case.  I remember being young and watching films that weren’t marketed towards me that weren’t made and released in the year that I was born.  I would be so deeply impacted by them that I released how much of an eternal shelf life movies have.  And there’ll always be different embodiments depending on the cultural needs at the time.  It’s always so cool to watch films and see which ones get re-done or re-enter the social sphere in a different way.  Donnie Darko has had that type of phenomenon.  But now, it’s more not even about the film work.  I have people saying they’ve seen me on Instagram, or something like that.  But when films come back it’s (always) really nice to see.

Adopting Audrey is screening in limited release theatrically and available On Digital and On Demand in the United States from August 26th, 2022.  An Australian release is yet to be determined.