Interview: Isabelle Fuhrman on training for The Novice and revisiting her role in Orphan; “You don’t realise what you’re biting off until it’s really hard to chew”

Winner of Best Narrative Feature and Best Actress at this year’s Tribeca Film Festival, as well as recently earning nominations for Best Feature, Best Director, and Best Actress at the Independent Spirit Awards, The Novice, director Lauren Hadaway, and actress Isabelle Fuhrman are more than receiving their fair share of accolades for one of this year’s most impressive features.

As The Novice, a psychological drama detailing one woman’s obsession with perfecting the art of college-level rowing, arrives in select U.S. theatres and on VOD this week (you can read our review here), our Peter Gray chatted with Isabelle about the intense training that she endured, working with a first time director, and revisiting the role that she’s arguably most well known for, Esther from Orphan.

From my understanding you went above and beyond what was asked of you when it came to the audition process for this film?

Yeah, I really wanted this part.  I read the script and knew I had to get this role.  Much like (my character) Alex I have a lot of drive and ambition in my own way, a little bit healthier I would say though.  I taped my audition scene and I thought it wasn’t enough, so I picked a scene in the script that I really loved and recorded it as well.  And then I wrote a letter to Lauren (Hadaway, the director).  I run, I had just done a run from Santa Monica to Vegas with my girlfriends, and I had a cast on from breaking my wrist the month before, so I wrote this very detailed letter, which also included pictures of me crying in the bathroom or on the side of the road just basically saying she has to hire me.  Emotionally I knew I could play the part but I could handle physical strain of it (too).  Clearly it worked.

What was the scene that you responded so much to that you auditioned with it?

The scene I recorded was with Jamie Brill, Amy Forsythe’s character, in the hallway after the seat race.  I just remember reading that and feeling like I understood how that scene should be read.  It was really strange.  Sometimes when you read scripts you think “Oh wow, that’s really great”, but with this one I was saying them out loud, I felt like I was in (Alex’s) brain.  I think that’s the same with the movie too, that you step inside Alex’s head.

A few years ago I did a boating event and the preparation for that was insane.  Learning your own body’s capabilities and getting in sync with your team…how intense was the training for this film?

The training for this was unlike anything I have ever experienced.  To learn an entire new sport in 6 weeks was a huge challenge.  I was totally up for it and excited, but you don’t realise what you’re biting off until it’s really hard to chew.  Lauren told me there was no money for a body double and I was going to be actually rowing and they were going to film in the boat because they wanted it to look real.  She rowed in college so she wanted it to feel authentic.

It started with her pulling her old erg machine out of her garage and teaching me how to use it properly, and then sending me home with it so I could row in my bedroom.  Then I was immediately in rowing classes for 6 weeks.  I was up at 4:30am, stepping into my leggings and driving to Marina Del Ray to row for 3 hours, watching the most beautiful sunrises I have ever seen as I’m bleeding and sweating.  Then I’d take a nap for 15 minutes, stuff my face, get back in the water for 3 hours, and then drive through rush hour traffic in West Hollywood to train in a gym for an hour.  It was really cool to see my transformation over that time, because it really felt like Alex’s journey as well.  Watching my body change physically, I gained about 12 pounds of muscle and was down to about 13% body fat.  As much as it was torturous at times, I knew how imperative it was for my own physical and emotional performance. 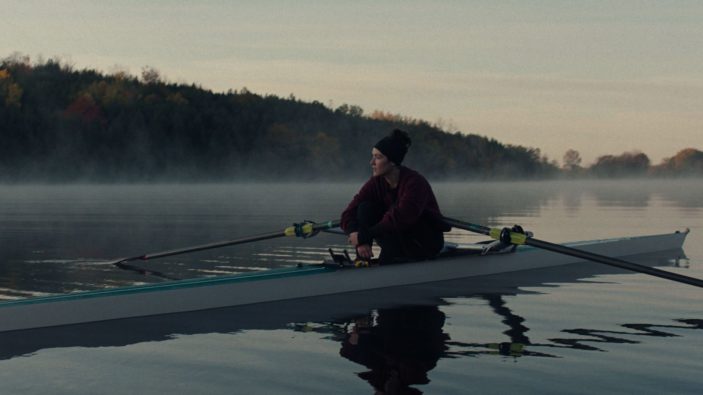 Did it feel intimidating to sit in with actual rowers?

Yeah.  Amy Forsythe and I both didn’t have doubles for this movie, and when we showed up we were both massively intimidated.  These are college students who have been rowing since they were kids.  It’s an incredibly difficult sport to master.  There are so many scholarships in female rowing and because of that they start training when they are kids.  And rowers are so tall! So, so tall.  And I show up on set (gesturing her head upwards) and I look nothing like these girls.  But they were so incredibly supportive.  I remember one of them said that if I defined my leg muscles more it’ll look more convincing.  It was really helpful in peppering in certain things to not only my performance but my physicality.  Everyone was so supportive, it immediately cut the intimidation.

This is the feature debut for Lauren Hadaway.  How was it working with her?

So easy.  Lauren was so specific about what she wanted.  I think the hardest part about being a director on set is making sure everyone knows what you’re creating.  Lauren did an incredible job telling everyone about the story.  We all knew what we were creating.  Lauren took every single dip or action or issue in stride and found a way to integrate it into the movie.  That’s what you hope for with a director.  When a ship was literally sinking she’d be like “Well, it’s sinking, let’s figure out how to make the sinking work”.  I trust her with my life.

Though I wouldn’t classify The Novice as a horror film, it has horrific elements to it, especially in the way Alex pushes herself, and it’s a genre you’re obviously known for with Orphan and The Last Thing Mary Saw.  What is it about the genre that appeals to you?

I think I just like darker material.  Orphan, which was the first thing I ever did, always crosses my path, but the next film I’m doing, which I can’t say too much about, is a complete dive in the other direction and I’m so ready to just have a good time.  I think that’s what you look for as an actor, to be challenged and go in different directions.  There’s so many reasons you say yes to a project.  (The Novice) didn’t feel like a horror film to me at all.  I know it has those dark and ominous tones to it, but it felt like a very human story of how a young woman drives herself to the point of implosion.

I know Orphan is being revisited with a prequel (Orphan: First Kill).  How was that to revisit a character you played as a child?

It was really exciting.  It was like putting on an old dress that you really love.  It was a really strange experience, obviously, to be in your 20’s and playing someone who’s 10 years old.  As a child I knew what I was doing with that performance, but there are things that people didn’t explain to me.  My explanations for things were very elementary and quite basic.  How do you explain seduction to a 10-year-old? “Oh you really want him to like you but he hates you”, that’s how everything was part-mentalised.

I took out my old script and read the notes I made when I was 10, and that was kind of the first step in getting ready for the prequel.  Truly, the trust that William Brent Bell had to cast me, to film it with forced perspective, to do all these lighting tricks to make it look like I was a kid…I saw the film about a month ago and it was a deeply unsettling experience.  I don’t know if people are going to be more creeped out by the first one or this one.  Esther being her own iconic character, I felt like I was allowing this haunting character back into my life.  The only challenge I had was being more childlike.  I remember finishing Orphan and feeling so adult because I had spent so much time copying adults, and for this movie it was like playing pretend because that’s where I needed to be.

The Novice is screening in select theatres and on VOD in the United States from December 17th, 2021.  An Australian release is yet to be determined.