Interview: Hugh Jackman, Thandiwe Newton and Reminiscence writer and director Lisa Joy on the creation of a new futuristic world in cinema

Written and directed by Westworld co-creator Lisa Joy and starring Hugh Jackman, Thandiwe Newton and Rebecca Ferguson, Reminiscence is a mind-bending new thriller that asks the question of how far you would go to hold on to the ones you love? Speaking with our own Peter Gray ahead of the film’s release, Hugh, Thandiwe and Lisa discussed the story’s bold blending of genres, how the story came to be, and, for Hugh, what moment in time he’d revisit if he could.

Hugh, I really appreciated the futuristic mentality of this film with its setting and its technology, but then it adopted a more classic noir detective narrative, which I think is a testament to the creativity of Lisa Joy.  How was it working with her?

Beautifully said, by the way.  Working with Lisa, you feel such safety with her.  She’s so thorough.  The script had been sitting in a drawer for 5 years, you know, she wrote this 5 years before Westworld, just waiting for the success of something in order to get it financed.  It’s her passion project, her dream.  What she can do, that very few writers can do, is establish a genre, blend it, break it, and then put it all back together in a way that feels incredibly deliberate and poetic.  You never know where it’s going, it’s always original…it’s smart and yet it’s moving.  I just think she did such a brilliant job, and I actually said yes to my agent about 20 pages into the script.  She had already described the movie and I (knew) I wanted to work with her and I was pretty sure this was it.  As soon as I read 20 pages of her style, I was in.

The film touches on the idea of being able to re-live certain memories.  Is there a particular memory of yours that you would happily re-visit?

Oh, many…with a 21 and 16-year-old? I would even happily re-visit the times of waking up in the middle of the night to feed a baby, those middle of the night moments of just holding them and falling asleep together on the couch, that kind of thing.  They are moments I can never get back.  I would like to go back to the Centenary Test with my dad where I inadvertently walked out of the ground at the MCG, and couldn’t get back in without a ticket and was just lost and sitting outside.  I just want to re-live those first 30 minutes, cause I don’t remember one ball being bowled (laughs) but that’s what I’d like to remember.

The film is so grand in its setting.  How much of it was a physical set?  The water rising, the buildings falling…it was hard to determine what was there and what wasn’t.

A lot of it was done in camera.  Even the holograms.  And I know the audience is going to presume it’s all a visual effect, but it was there for real for us as actors.  It took them a year to figure out how to do it.  That type of technology hadn’t been done before.  I still don’t really know how to describe how they did it, but, I can tell you, as an actor this was one of the most beautiful sets I had ever been on.  To see these memories, these holograms, come to life was just amazing.  The water? We essentially built huge swimming pools around office buildings, and people are re-setting them by riding canoes down…it was bizarre.  It was all done in camera but then added to with special effects. 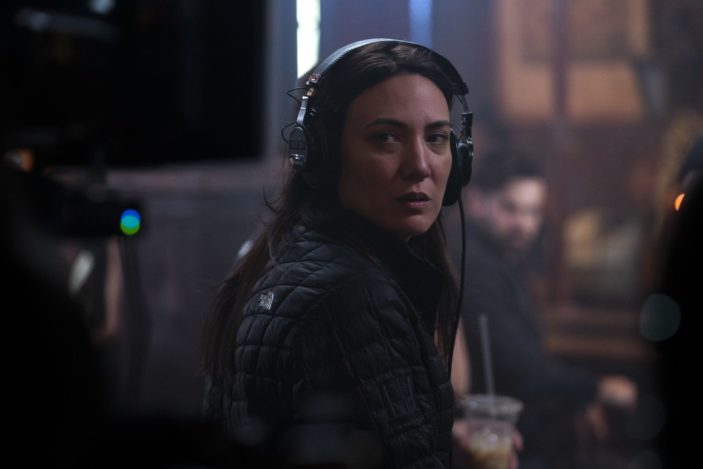 Lisa, during the trailer launch I remember you mentioning a story about a trip to your family home and seeing a particular plaque is what essentially kickstarted the idea for Reminiscence.  Could you expand on that and how it led to this film?

When I was kicking around the idea for the film, my grandfather, who lives in the North of England, he passed away and I went there with my grandmother to sort through her belongings.  From when I was very small he had always lived in the same house, this small stone house, and there was always this plaque that said “Suki Lyn” in fancy, gold lettering, and whenever I asked him what it meant he just said it was because he liked the name.  But after he passed and I was going through his belongings I found this old, faded photograph of this woman, and on the back he had written “Suki Lyn”.  I realised he must have met her some 50 years earlier and spent the rest of his life in Huddersfield in England, so I doubt he ever saw her again, but something about their relationship endured and it made me think of the power of memory and how those moments that we cherish, even if they don’t last in this world, can last a lifetime in our minds.

I mentioned this to Hugh about how much I appreciated the futurism of the movie being offset by that classic detective narrative, the way that he narrates in that manner.  How did the ideas for how you wanted this movie to be presented manifest for you?

It was all so organic for me.  I always start with the emotion and the heart and the themes, because I think those are universal, and memory, to me, has always been a subject of fascination for me.  I’ve always loved noir and I love action, and I can’t help but speculate about how our world is changing.  And the ways how our technology can influence the internal landscape of our minds and the external landscape of the world.  It all just came together quite naturally.

The world you’ve created here, and the same with Westworld, you have such a strong handle on creating these futuristic settings that also feel believable and possible.  Do you have any idea where you want to go next?

I do have a bit of an idea, yes.  And, once again, I am stalking our friend Hugh and talking to him about our next possible endeavour.  There are some themes that I think can be continued from what I explored in Reminiscence that I’d like to explore.  Not as a sequel or anything, but I just love working with Hugh, and when I love working with an actor as versatile as him I just think about what can we do next to push the envelop and re-invent him from the start. 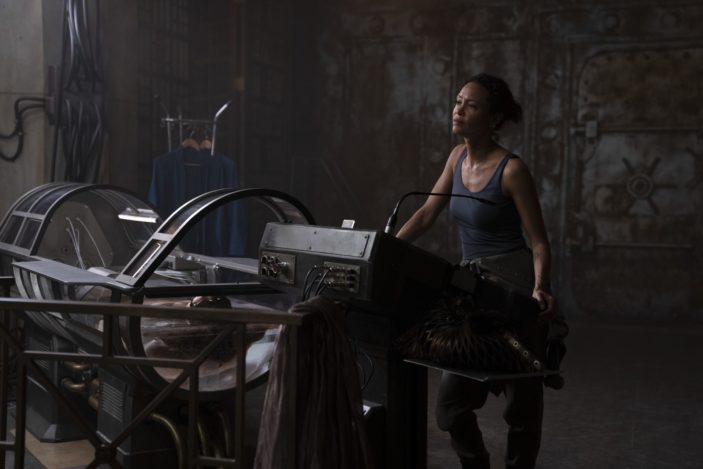 Thandiwe, I do have to say, I saw you in Flirting many years ago when I was probably far too young to have seen it, but your performance stayed with me.  Then with Beloved, Mission: Impossible II, Crash…so it’s really a pleasure to speak with you.

Oh, thank you so much.  That really means a lot.  Flirting was my first movie.  I had never stepped foot on any type of set or stage…it was huge.

How was it for you first reading this script? I’ve mentioned prior how the ideas in this film are so grand.

It was wild.  You’re reading stuff like “Then the piano goes through the floor”…and you think “Well, obviously that’s not going to happen!” because you can write anything.  You can write “Pigs can fly”, you know what I’m saying? It was a script like that where you think it would be cool if you could actually do it.  And then I get on set, and we are actually doing it!  Not just with a hologram that’s CGI, we are actually acting with a life-size hologram.  And that’s supposed to be my work place, so it was the best office ever.  Best job ever! There’s me acting drunk and messed up and like I don’t really give a shit, but inside I’m like “Woahhh!” It was like an opium den, that’s what it reminded me of, but we aren’t dealing in opium, we’re dealing nostalgia.

I loved that the technology in this was physical…

It was unbelievable.  Also, the choreography of the stuff that wasn’t CGI, like the stunt sequences…Hugh, his commitment, his work ethic is absolutely next level.  And included in that is his treatment of himself and other people.  He is present.  I think that’s why the set was such an incredibly positive environment.  Not only was Hugh bringing his A-game every day, he’s connected with everybody, he knows everyone’s name…and then you have Lisa Joy who is innovating this brand new technology and she’s excited by the people she’s around.  Not only is she adoring us for the things we can do, but she’s hopeful and encouraging in the things we can’t do.  That is a great energy to be a part of.  You want to do your best with people that are giving just a bit better than their best.  It was gorgeous.  It was the type of film that I had never felt before.  You have this future where there’s crossings of all different cultures and ethnicities and it’s something you can’t imagine, well I can because that’s how I live and I want to encourage it more (laughs), but you have this melting pot of cultures and I think it’s something we all really benefitted from.

Reminiscence is screening in Australian theatres from August 19th, 2021