Interview: Firestarter director Keith Thomas on casting Zac Efron as a dad and the pressure of adapting Stephen King

Set to ignite Australian cinemas from May 12th (and, appropriately, Friday the 13th in the United States in both theatres and on Peacock), Firestarter, Stephen King‘s classic novel about a pyrokinetic young girl on the run from a government agency hoping to control her for their own benefit, will earn new life through director Keith Thomas and the legendary Blumhouse company.

Ahead of the film’s release, Peter Gray spoke with Keith about if he felt any pressure adapting a Stephen King property, how it felt working with a company that clearly appreciates the horror genre, and how he got Zac Efron on board as a dad.

Congratulations on not only Firestarter, but The Vigil as well.  That film definitely proved a welcome break from the usual horror fare, as well as providing much needed entertainment throughout the pandemic.  With your films being in the horror field, is it a genre you have a particular affection for?

Yeah, definitely. From my very first short film, which was horror…I don’t know why that is.  I do like lots of other genres but I am drawn to horror, and I feel like as a filmmaker and the way my mind works, horror is the best expression.

With your relationship with Blumhouse being formed through The Vigil, were you on their radar for this film? Did they come to you with Firestarter?

Yeah.  After The Vigil had its premiere at Toronto I went to a meeting at Blumhouse a few weeks later. We did the usual “What have you got?” talk, and then Jason Blum surprised me and he said “Keith, I know what your next movie is!”, and I said “Oh great, what’s it gonna be?”

Of course I knew Firestarter, I’d seen the 1984 film, I’d read the novel…I tried to hide my excitement.  I asked to read the script (because) it all comes down to that.  I read it on the flight home and by the time I landed I thought I wanted to do this.  It wasn’t until we were in development that I was like “Wait a minute, I’m making a Stephen King film.  This is kind of crazy!”

I was going to ask did you feel any pressure? We already have a Firestarter film and it’s Stephen King.  Not exactly the easiest thing to be thrown in to!

Once you go down that rabbit hole…I remember early on in development looking up lists of “Best Stephen King films”, and there’s so many.  I was looking at them like “What am I gonna do?”  There’s Misery, and Shawshank Redemption, and Stand By Me…The Shining…eventually I just had to put it out of my head.  Regardless, it does stay Stephen King on this, he did write the novel, it’s his story (but) I gotta make it my own movie.  I have to make it my own thing.  And let that go.

The directors I have spoken with that have worked with Jason Blum and Blumhouse mention the free rein provided.  That must feel nice that there’s that trust there.

Yeah, 100%.  It was very much the type of thing where the crew at Blumhouse said “We liked what you did with The Vigil.  We’re gonna let you do your thing with this.” Clearly, there’s a lot of development with the production and the budget, but I never felt like I was being boxed in any way.  It was never “You can’t choose those lenses” or “You can’t go this dark”, it was much more supportive.  It was “We want to make this the best thing we can, here’s some ideas…” and most of the time they were great.

It’s weird for me to think that Zac Efron is old enough to be a dad, but it makes sense because he is 34-years-old, but we’re so used to him as a teenager.  How did his casting come about?

I had met with a few actors for this role, and Zac had expressed interest.  I thought “Hell yeah, let’s meet with Zac!”  My first meeting with him was great.  Zac came in talking about what he’d done, what his career has been, where he comes from, and that he wanted to do something different.  He wanted to stretch a bit and play a dad.  And he wanted to do a genre film.  Something people wouldn’t expect.  And when an actor of his calibre comes in and says” I wanna do these things and I want you to direct it”…it makes sense.

He threw himself into it all the way, in terms of really putting himself out there and having lots of in-depth conversations about being a father.  I couldn’t have been happier how it went with Zac. 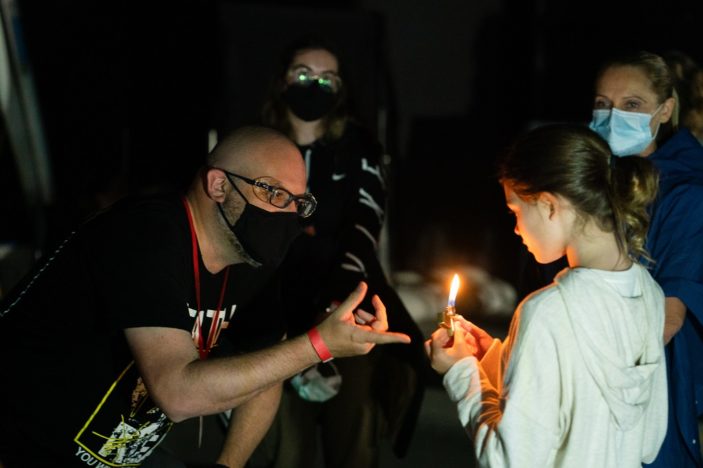 So many of these films live and die off the casting of a character like Charlie, and Ryan Kiera Armstrong is incredible.  How did you find her?

Ryan’s been acting since she was like 5.  It’s interesting, when she did her audition I was like “I know this girl.  I’ve seen her!”, and it’s because she was in It: Chapter 2, so she’s already in a Stephen King movie.  But she has not only this type of innate presence in front of the camera and this comfort on set working with everybody, but she’s able to just embody the type of turmoil a child who’s going through puberty and dealing with the stress of being a kid, as well as being able to melt people’s faces off…that’s intense.  Ryan was able to turn it on and off between takes amazingly.  We all felt it.  The minute we saw her we knew “She can do this.”

With this film having the type of material it does and she’s as young as she is, do you have to explain to her what her character is doing? Do you have to be careful in discussing just how messy the things she’s doing are?

(Laughs) It’s one of those things where her dad is on set.  She’s read the script so she knows what’s being described and what’s going to happen.  In the instances where there’s scenes of particular horror, damage to a human body, let’s say, we’d get the prosthetics ready and I’d show her them.  She’d touch them, she’d meet the actor, she’d know and be comfortable with it.  She’d be like “That’s gross!” When it’s in broad daylight it looks completely different to what it does in post-production.  If she had any questions or felt uncomfortable about anything, we’d explain what we were doing.  It was protecting her to a certain extent, but she loved that stuff.  She was into all the effects.

Firestarter is screening in Australian cinemas from May 12th, 2022