Interview: Don Cheadle on playing a villain in Space Jam: A New Legacy and sharing the court with LeBron James

No stranger to the world of CGI wizardry and starring alongside names of sizeable weight, Don Cheadle is utilising both his talent and knowledge for his latest big screen venture – Space Jam: A New Legacy – opposite Los Angeles Lakers MVP, LeBron James.  Talking with our own Peter Gray ahead of the anticipated sequel’s global release, the Oscar-nominated actor discussed finding the humanity in his villainous artificially intelligent character, working alongside LeBron, and how teasing that Michael Jordan announcement has played out for him.

What drew you to this film? Were you a fan of the original Space Jam?

I actually never saw the original Space Jam, to be honest.  I was a huge fan of Michael Jordan.  This one I thought was really fun, really interesting.  When I read the script, being able to do something that’s just pure fantasy but it’s still about family, still about individualism, still about identity…and if you wanted to a deep dive on it you could talk about artificial intelligence and social media in some ways.  There’s a lot of different levels you could look at this movie on.  Or you could just switch your brain off and just watch it and be into the animation and crazy antics of the characters.

I imagine half the fun of playing someone like Al-G Rhythm is deciphering what would make artificial intelligence tick and their priorities? How was it for you in conveying someone that goes beyond being human?

I think that’s it, you hit the nail on the head.  It’s thinking about it in terms of human.  I don’t care what you’re playing you have to figure out the truth in what you’re saying and doing.  You have to connect to the other people that you’re with in the movie, and like any human on the planet, you have goals and desires, and how you wish to accomplish those and never stray from them.  That was what Malcolm (D. Lee, the director) and I talked about from the moment I said yes to deep into post-production.  How to get that story right.  What does this A.I. want and how does he go about getting it.

Obviously you’re no stranger to the world of CGI.  Was this process different to navigate?

It wasn’t too dissimilar from what we do in Marvel or something you would do where there is pre-vis.  You have to really rely on storyboards and shot lists.  I was wearing mo-cap some of the time, and I always had motion capture dots on my face…there are a lot of technical aspects that go along with this.  At the end of the day you’re still trying to distill it down to making moments that feel real.  Even if in production what I’m connecting to is a dot on a screen, people still have to feel like there are things talking back to you.

An obvious question but how was it working with LeBron James?

Remind me again who LeBron is? Oh the tall dude? Yeah, it’s a lot of fun working with him.  We had a lot of fun on the movie.  He is as committed as a player and teammate as he is a performer and an actor.  I remember there’s a scene, and I don’t know if this is still in it cause I haven’t seen the movie, but there’s a rap battle that he wasn’t really aware of much on the day.  He just started jumping in, taking pictures, rapping, co-signing…they yelled cut and he was like “I’m not just going to just stand back here! If i’m in this scene then I am in this scene”.  So he was fully down to be involved and he wasn’t afraid for us to take pot shots at him and poke fun.  He’s just a cool dude all around.  It’s great to have formed a relationship with him outside of this movie.

I have to say, genius move on your part by teasing the Michael Jordan appearance.  How has that response been for you?

Well, initially people were very upset, saying “Spoiler alert bro!” (laughs) like you guys need to watch the movie.  I don’t get too bent out of shape by what people say on Twitter.  If you’re going to get bent out of shape then don’t play. Don’t play.

You’re a director yourself.  Do you have any inkling to direct something as special effects heavy as this?

You could’ve stopped after direct (laughs), no, I’ll direct again.  It’s just such a long process, you know (for a feature) it’s a year and a half of your life.  I still direct TV and commercials, but I think the best directors that deal with this (genre) really rely on their special effects team for a reason.  The most important thing you can do is articulate your vision and cast that group well so you have people that realise what you’re trying to accomplish.  (The story) still has to resonate, it still has to be a part of what you respond to, and that’s not always visual but emotional.  That’s the goal.  I would do it if I saw something that came along and thought it was great and I had the time. 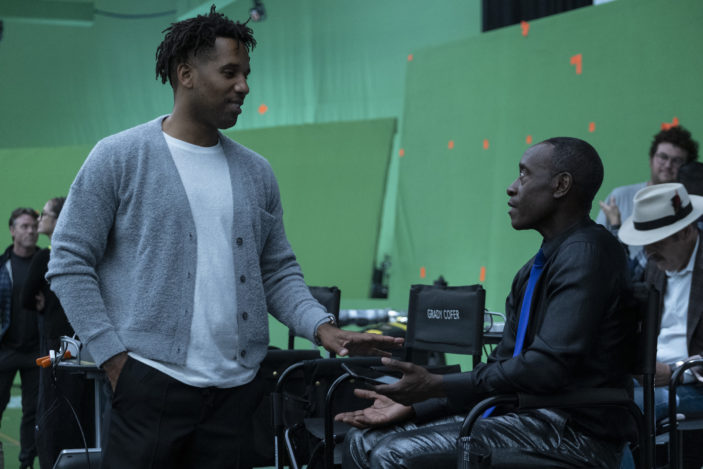 Towards the end of the film you’re very much in on the action, essentially sharing a court with LeBron James.  How much of the crowd there was real? It’s quite hard to decipher just how much is CGI.  How much of a spectacle was that to film?

We had on any given day around 200 background artists.  The first couple rows of people (around the court) are actually there, which is crazy.  I had a real affinity for them, and I would always try and pull people that were behind me into “bits”.  Again, I don’t know how much of this in the movie, but anything I had to do I always tried to pull someone in with me, to be a part of it.  They really do make the movie and they gave us that energy.  We were very clear in thanking them every day and clap for them and lift them up.  We wanted them to know they were a part of this.  It was really great at the end of production – and this is something that has never happened to me – (the background artists) all signed a poster for me and for LeBron of all these (film) cells of us dunking…it was really nice.  When you’re in an experience like that with that many people, for that many days, for that many hours…I just felt for them, so I was very appreciative of them the whole time.

Are you sure? Do you want me to bring them up for you?

At least not a villain in the theatrical sense.  It must be fun to play someone in the sense that you can never go too big or too far.

That was a question we had.  We went back and forth because at one point we were discussing me looking much more like an animated character, it wasn’t going to look like “Don Cheadle”.  My face was always going to be morphing and changing, taking advantage of the CGI.  Everyday I had motion capture dots on me and I never knew until post (production) what they were going to do with my face.  Ultimately, what they decided to do with it, they being Warner Bros., said “We want to see Don” so I was questioning what you were saying (laughs) thinking is it buffoonishly huge?  Is it going to be so over the top because I’m thinking they’re going to animate my face…but hey, if it works it works.  I’ll take your word for it.

Space Jam: A New Legacy is screening in Australian theatres from July 15th, 2021, following advance screenings from July 8th. It will be released simultaneously in American theatres and digitally on HBO Max from July 16th.