The idea of making a movie about a viral outbreak during a pandemic is a form of irony that was not lost on director Kiah Roache-Turner or star Luke McKenzie when filming Wyrmwood Apocalypse, but as on the nose it may have been, it was perfectly in tune with the embracement they felt when leaning into the schlocky expectation of a zombie movie.

As the sequel to 2015’s “most pirated film” unleashes in cinemas across Australia, Peter Gray spoke with both Roache-Turner and McKenzie to discuss the difficulties of filming, how great it feels to be releasing their film in a cinema, and the joys (and dangers) of practical effects.

You’re filming a zombie movie during a pandemic, a time that’s filled with such uncertainty.  How was the production experience?

Kiah Roache-Turner: Pete! The irony was not lost on us.

Luke McKenzie:  The anachronism is real.  It was a pretty strange process because there’s a lot of questions around what audiences want to see.   Do audiences want to see masks and viruses.  I think Wyrmwood was kind of made in the perfect time.  Covid is still in the zeitgeist but it feels like there’s a bit of distance (from it) now.  On the ground, in terms of making it, I don’t know how they timed it.  The script came to me in mid-2019, but by the time we were on set it was a strange turn-of-events.

Kiah Roache-Turner: With the first film we had no money but all the time in the world to do it.  On this one we had more money but no time.  We shot the first one in three-and-a-half years.  We had a lot of time to re-make things that weren’t working.  This one we shot in 6 weeks, and we didn’t have the money for any overtime.  What we shot was what we got.  That’s really the hardest part of independent filmmaking.  It’s not how good you are as a filmmaker.  It’s how good you are under time pressure.

The first film has the honour of being “the most pirated film of 2015” – quite a bizarre accolade to hold on to – but it must feel great to see the sequel actually going to cinemas.  Especially during a time where so much content goes to a streaming service.  Something like this deserves that cinema engagement.

Luke McKenzie:  You are absolutely right.  There are some things made today that are catered to the small screen or a tablet.  Something like Wyrmwood… to see it on the big screen is something you always envision.  It’s such a ride.  All your senses are on edge and I think you need to be in a cinema to experience the full breadth of that.  Nothing is a given these days.

Kiah Roache-Turner:  I like to say it’s a dubious honour, but it’s an honour all the same.  How did this tiny indie film, with no budget and no marketing become the most pirated products on Earth.  And you think, “If everyone just paid for it, I’d be able to afford a house!”, but you the internet gave me a career.  It lost me a lot of money, but what it does do is kill the amount of time it takes to become a cult classic.

And we’ve always a wanted a theatrical run.  If you can, then you need to.  You’re allowed to have both (streaming and cinema), but I love that we’re doing a proper cinema run.  We’re doing theatrical for about a month and then it’s VOD and DVD, the way it should be.  It’s the perfect streamlined way it should be.

Were there ever conversations had with you during the making of the first film regarding a sequel?

Luke McKenzie:  Huge surprise for me, because (my character in the first one) The Captain obviously gets his head torched, burnt, eaten by zombies… as far as my participation, I thought “no way”.  I think the way the first film ended, it created that universe to amp audiences up for it.  I think people were talking about (the sequel), but for me I thought I was done.  It was pretty exciting when they came to me and asked what I thought about being the twin brother (laughs), but I think it absolutely works.

It really is one of those classic tropes that when it’s pulled off successfully then we go along with it.  We’re already watching a zombie movie so the idea of a twin isn’t really stretching the thought process.

Luke McKenzie: Exactly! Yeah I don’t buy that.  You had me at zombies, but a twin brother? You lost me!  That’s the thing though, it’s just so fun and that’s what the boys have created.  I think subversion is fantastic but with this they own it completely with that schlock.  As a result it’s just so unapologetic, and mad fun. 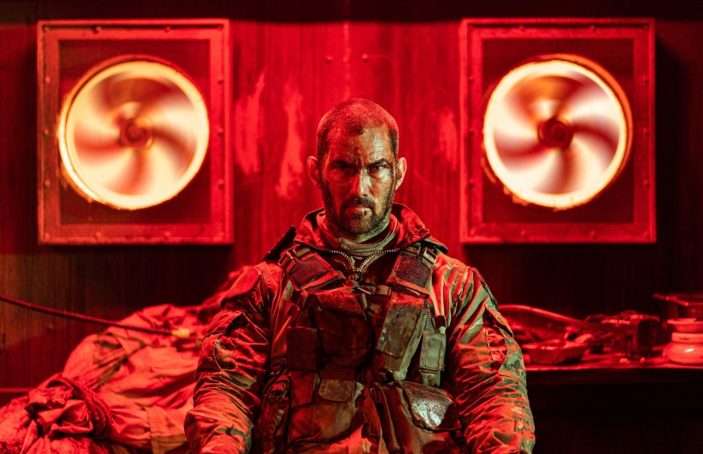 As you said, I love the schlock factor, and so much of this film feels like it was made as practical as possible, in terms of effects.  The film really leaned into that practicality.  Were there any moments difficult to film because of such practicality?

Luke McKenzie: I mean the whole film was difficult.  We had a decent budget compared to the first film, but it was still a pretty lean production.  Everything was hot! We were always under the time pump.  Most of the effects were practical, and we did as much as we could.  There was one moment that was so ingenious.  We were down in the bunker and Shantae (Barnes-Cowan) and I essentially were put inside this very narrow pipe, a third of it was cut out (to fit us) and then the stunt team kind of enclosed us in.  There was smoke and we were bloody, and it looked great.  CGI has obviously come a long way, but a movie like this you need the practical effects.  You can feel it.

Kiah Roache-Turner: I’m really glad you said that.  We have such a visceral reaction to things we are scared of.  The brain can tell when a creature (on screen) is CGI.  All of the best horror films are the ones that respect that.  All of those 1980’s horror movies, like Jaws or Alien or John Carpenter’s The Thing, they were all creatures that were built.  You look at the practical effects of An American Werewolf in London, and that wolf is real.  It doesn’t matter how well the hair follicles are created digitally, they’re still not real.  And the brain knows that.  I didn’t get into this game to do green screen, digital bollocks.

The description of that stunt sounds kind of terrifying.  Did you ever feel unsafe? Or you just went with the flow and trusted the surroundings?

Luke McKenzie: Both, at the same time (laughs). 100%.  I might have broken that bone, I may land on my head, but I love the guys.  I trust them, let’s do it.  That’s the nature.  You just have to trust your own body and the team.  The stunt team are such consummate professionals and they would flag if we were ever tired or manic.  They would just call time out, so there was never any irresponsibility, it was just if they were game, so was I.

Kiah Roache-Turner:  He loved it.  I had always wanted to give him a crackling lead role.  Hold a gun, do 360 degree rolls in the grass, kill the bad guy.  But at the same time, and he’s the same age as me, we put his body through brutality.  He did 6 months of training prep on his own, and even then we beat the crap out of him in a way that made him question why we were friends in the first place.

I know you’re a writer too, Luke.  Is that something you hope to pursue further?  Has working on Wyrmwood made the possibility of exploring a horror film something you’d want to do?

Luke McKenzie: It’s cliche to say but I really feel like movies raised me.  The power of cinema has left a very strong imprint, so I love cinema in all its forms, all its genres.  It’s a weird one.  When the guys called me up to do the sequel… it wasn’t so much that I had closed the door on acting, I just hadn’t really given it any weight in a few years.  I don’t know if putting this out there in the universe is a good thing or not, but Wyrmwood genuinely felt like a bit of a farewell almost.  If this is the last film I do as an actor, and who knows if it is or isn’t, I’ve embraced that process.  This film isn’t requiring any deep emotional mechanics.  I just went in and enjoyed every scene I was in, every day I was there.  There was such a family dynamic on set.  Everybody in the cast and crew are just good human beings, so the process was so enjoyable.