Following its acquisition by Shudder, Edoardo Vitaletti‘s horror film The Last Thing Mary Saw will commence its streaming season on the genre-centric service from January 20th, 2022.

To coincide with the film’s release (you can read our review here), Peter Gray discussed with the writer/director the religious origins of the film, if he felt any pressure taking on such a controversial subject, and how as a first-time filmmaker he helmed such an impressive cast.

I caught this film last year at the Fantasia Film Festival and, admittedly, what initially drew me to the film was the fact it starred Isabelle Fuhrman.  I love those slow-burning horror films that make you think, more than anything.  When it comes to this film, where did the origins of the story start for you?

It was a combination of a couple of things.  I remember from a visual standpoint when I wrote it a few years ago, I was doing a lot of school and independent research on the history of Northern European art, especially from the 19th century.  One thing I started to notice was that there were a lot of recurring visual threads, things like funeral scenes and stark houses and barren environments.  There’s this Danish painter who paints female subjects alone in these houses and they look very gloomy, but also peaceful and evocative to me.  I wanted to shoot something that evokes that, that has that look and feel.

That’s how I came up with the idea of the two leads being women, and then on a more personal side I grew up in Italy, and it’s quite a homogenous country when it comes to things like religious orientation.  I was always taught as a kid that when you learn Catholicism it’s something that preaches inclusivity.  Then you grow up and you’re faced with the reality of the truth that it promotes this idea of a God and a church that’ll accept you and love you IF…

I wanted to confront myself with a lot of the personalities and people I have met growing up, and how much that impacts talking about identity and talking about relationships and sexuality.  The visual style kind of brewed together in creating a journey of these two characters.

Did you feel pressure taking on the religious side of things?  Were there aspects you didn’t want to confront people with, or did you feel that the point of art is to make people think?

I kind of just went for it.  I got to a stage in my life where religion had taken such a backseat in my life, in how I approached the world.  As much as I was soaked in it, I just went for it because I think it was time.  In a lot of ways I approached it with anger and brewing frustration.  I didn’t feel the need to hold back from that.  There’s always time for a conversation that’s more nuanced than what this film makes it out to be, but it was time for me to have a different conversation, to confront it.  I never thought about holding back…it’s been a long time coming.

In terms of the folklore in the film, did you do any specific research or was it fabricated on your part?

It was hopefully a healthy combination between research and making things up as I went.  I’ve always been fascinated with folklore.  When I was in high school a lot of my studies revolved around Latin and Greek mythology, so I always had an interest in it.  For those who aren’t believers, the bible is a collection of mythologies, essentially, so that made its way into some of the things the (characters) read from the book.  I wanted to observe religion through the lens of folklore.

I think you always start off being hyper-specific in your research, but then you realise research should just be a starting point that you get inspired by and you make up your own stuff.

Is the horror genre always been one you’ve gravitated towards? Where did that relationship start?

I didn’t always gravitate towards it.  I think, in general, darker films like dramas and thrillers through the genre lens has always interested me.  I think horror is something I began to watch more recently in my life.  We’re living in a great time, in terms of horror films.  Movies are being made that choose to approach the genre differently.  I have a lot of respect for the jump scare/slasher-type movies, but then I love the opposite too.  It’s nice to lean into the genre, because it’s finally being appreciated for the umbrella that it always was. 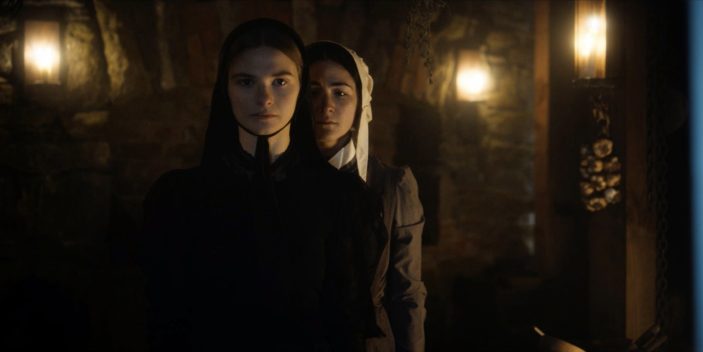 The cast you’ve assembled have horror experience between them.  How was it collating such an ensemble? For a small film this is an impressive line-up.

Oh, I was super lucky!  The first person who got involved was Stefanie (Scott), and then Isabelle (Fuhrman), and then Rory (Culkin) around the same time as Judith Roberts, who plays our matriarch.  I’ve always liked Stefanie as a performer, so I reached out with the script and she was very curious about the story.  When we talked it was great.  When Isabelle became involved…she had wanted to work with Stefanie, so it really fell into place nicely.  When you speak to the two of them and Rory, they’re just splendid.  They have such experience with the genre.  They leaned into the size of the movie and were aware that this was going to be shot in 15 days.  They knew it was going to happen quickly, that it would be rough and dirty sometimes.  It was great to have people with genre experience because they can walk you through the process a little bit more.

I think a testament to them as actors and yourself as a filmmaker comes together in the dinner scene.  That’s a virtually silent scene.  How did you go about creating that tension?

That was such a specific (scene).  I had that as a goal.  I knew I wanted the climax at the dinner scene to be completely quiet.  I wanted everyone to have that limitation.  Coming into this film I wanted (them) to know there’ll be this 20 minute scene of silence.  A combination of a lot of quick shots and a lot of blocking.  A lot of being sure of what you wanted to say without actually being able to say it.  It’s strange because I feel as an actor it’s easier to memorise lines than when they’re not able to say them.  They had to a lot of work with what looks they had to give, what am I “saying” here…when you’re so purposeful about it, it becomes a fun puzzle to solve.

There was a lot of visual and performance planning.  We talked about that scene more than any other scene in the movie, but it became really fun to work within those limitations.  If you embrace (them), it’s a riddle.  (The cast) told me they don’t get to play as much because it’s always about the spoken word.  The movies I love don’t say much verbally.

How did the streaming option with Shudder come about?

When we premiered at Fantasia, which was (last year), like you said, people had been interested in the movie because they liked the cast.  We had a couple of different companies reach out, but Shudder are just the best at what they do.  They’re super supportive of the film.  The way that they spoke about it, I knew they understood what I was trying to go for.  They were excited about it and were respectful of the vision.  I love using their platform.  They have such a broad spectrum of films that they appreciate and know how to present to their audience.

The Last Thing Mary Saw is streaming on Shudder from January 20th, 2022.