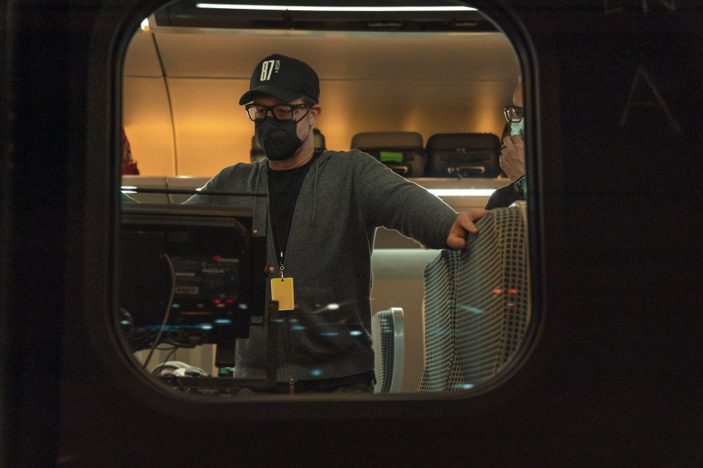 Having cut his teeth as a stunt performer for stars such as Jean Claude Van Damme and Brad Pitt over the years, David Leitch knew what it took to perfect the action stakes when he took on the role as genre director.

Following a co-directing stint on the first John Wick film, before graduating to helm such acclaimed spectacles as Atomic Blonde, Deadpool 2, and Hobbs & Shaw, Leitch is tackling his biggest project yet, reuniting with Pitt for the ensemble comedic actioner Bullet Train.

As the film speeds into cinemas across the country (you can read our review here), Peter Gray spoke with David about how his stunt background has influenced his directing, the necessitation of injecting comedy into his work, and which Bullet Train sequence he refused to cut.

I have to say this before anything else: Thank you for gifting us with Aaron Taylor-Johnson and his “great walk”.

(Laughs) He does have a great walk!

I know! That was really funny improv by, well, we won’t say who.

Yeah, we’ll keep that a secret.  That got me thinking of how important casting is in ensemble films, and the talent here is insane! How do you go about wrapping your head around having so much collective talent and getting them to say yes?

You know, it’s humbling.  We made this at the height of the pandemic.  We were one of the first (productions) to figure out how to make a movie.  I think there were a lot of people raising their hand just itching to get back to work.  Brad was the first person to jump on board.  Like, “Holy shit, we got Brad Pitt!”

We have a long history, Brad and I, but I never thought in a million years that he would say “Yeah, I want to do Bullet Train with you, Dave.” He saw what we saw in it, and you’re right, there’s all these crazy characters, and this script by Zac Olkewicz is a terrific adaptation of this book.

So, you have Brad Pitt, you have a really great script, the talent is eager to go to work…everyone’s raising their hand.  Even getting people to read, like Aaron Taylor-Johnson? He doesn’t need to read for a role, he’s proven himself.  But he wanted to.  He wanted to show me who (his character) Tangerine is.  I get on a Zoom with him, because it’s the pandemic, and he’s got Tangerine just coming to life.  This Eastender just jumping off the screen at me.  I’m like “Holy crap”, we have this incredible live wire on the other end.  Now we just have to find his other half, so we reached out to Brian (Tyree Henry) and spoke about what he thought of the character and just making those adjustments in bringing them together.

And then you have Joey King, and it’s so beautiful to see how she’s maturing (as an actress).  To have all this talent was really daunting.  So when I got them on set, I just wanted to foster an environment where they could bring their best shit.  I think we did that.  We were having fun during really difficult times.  And I encouraged them to be bold and to take risks, and to let them know that the material in my mind is broad, so bigger doesn’t always mean bad.  So we went there and I was able to rein it in in post (production).

I think you’ve really tapped into a subsection of the action genre where you lean so far into the absurd possibilities, but you ground it with comedy because you’re aware of just how much you’re pushing it.  Did your background in stuntwork start that appreciation for you?

Oh, 100%.  My background in stunts still anchors my love for film.  My action roots are where all my influences are.  Jackie Chan is a huge influence in this movie, right? Like, even the tone in the scenes and the Ladybug character himself is very Jackie. My love for action films and my experience in action is part of the DNA in everything I make.  You won’t separate it from me anytime soon.

You’ve been Brad’s stunt performer before.  Obviously as his director now you can’t sub for him.

I believe he did like 95% of his own stunts, so it’s clear he learned from the best.

I worked with him on like 4 or 5 movies in the early 2000’s, you know, it was Troy, Mr. and Mrs. Smith, Fight Club…but a lot of my role as a stuntman for someone like Brad who is so physical is really me training him and rehearsing the stunts so that he can execute them.  It’s only when I step in that I know it’s really going to hurt (laughs).  If you’re doing it right, great action designers create action to keep characters in the movie.  That’s what Chad (Stahelski) and I tried to create with John Wick, the first time out.  We trained up Keanu (Reeves) because we knew it would be more compelling to have John do these 12 moves and go in for a close-up and see that it was Keanu the whole time.  That’s part of our style.

Was the “Maria Beetle” novel this film is based on something you were aware of prior to making Bullet Train?

I wasn’t.  I came to the script through the screenplay.  Zac Olkewicz had been hired by the studio to adapt the novel.  I read that screenplay and just thought how fun it was.  It’s bombastic killers on a train from all over the world, and it was already this big, global thing, so when I went back to read the novel I was blown away by how well Zac had adapted it and its essence.  The novel is so dark and irreverent.  Kōtarō Isaka’s work is pretty baller.

I understand in the development stages that director Antoine Fuqua had envisioned this as straightforward action film.  When you came on board, was injecting comedy a necessary asset for you?

Totally.  There was a lot of it on the page though, don’t get me wrong.  Antoine was involved with the first draft and it was dark.  It was dark comedy, but the physicality wasn’t as broad.  There wasn’t that element of Buster Keaton-meets-Jackie tone.  Part of my conversations with Brad early on where that we were in the middle of a pandemic and people want to laugh.  Brad wanted to laugh.  His character is a buffoon, we are going to make fun of him, and he wanted physical comedy.  Brad came in with that, so we held hands together on that vision.  When we came on board with all the other actors it was kind of the mandate.  You can have fun.  You can go broad.

Aaron and Brian were actually nervous the first couple of days to take those risks, but they’re so good at it.  And when I let them loose, the tone that they gave to the movie was perfect.

For you, is there any particular character or sequence that’s a stand out amongst everybody?

For me? My favourite sequence is “The Wolf”.  It’s something I fought hard for in the script phase.  Sony supporting an original IP with all this money is (amazing), so don’t get me wrong, but it’s standard studio stuff with them asking about cutting sequences.  The script was at 126 pages and they asked “Do you really need a 6-minuts sequence about The Wolf?”, and I’m like “I do.”

I knew that it would pay off and when you see it it’s cathartic and emotional.  Then we are in the production phase and working out the schedule and money, and “Do you really need a 6-day shoot on The Wolf? You could save half a million dollars by not shooting”, and they knew they never got me.  Then in the editing room they see it’s at 126 minutes, and “if you cut that down to 120, you get an extra screening a day!”, and I just couldn’t.  They didn’t understand.  It’s just my favourite! It’s this beautiful visual storytelling (moment).  It was this beautiful exercise, and it’s my favourite part of the movie.  Every time I see it I giggle.  Benito (A Martinez Ocasio) just crushes it with this non-verbal performance.  He just came in as the rockstar that he is and just brought so much heart.