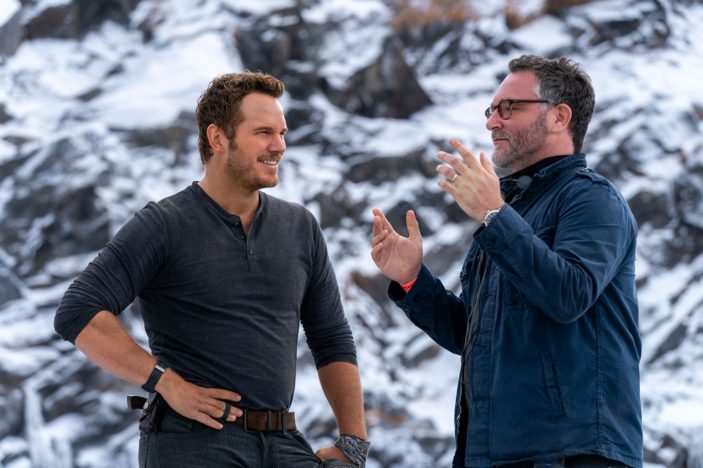 The end of two eras comes to a close this week as Jurassic World: Dominion roars into theatres, finalising both the original Jurassic Park and World trilogies that have seen dinosaurs roam the Earth for close to three decades.

Ahead of the film’s release, Peter Gray was invited to the global press conference to speak with director Colin Trevorrow, original star Jeff Goldlbum, Jurassic World heroes Chris Pratt and Bryce Dallas Howard, and franchise newcomers Mamoudou Athie and DeWanda Wise about finalising the series, the merging of the legacy cast with the fresher players, and why it’s OK to let an angel get kicked in the nuts for the sake of their “craft”!

Chris and Bryce, how was it for you to return to these roles?

Chris Pratt: So exciting.  It’s been an incredible journey. 9 years and 3 great films.  It truly is a grand finale.  It’s a magnificent ending to, really, two trilogies – both Jurassic Park and Jurassic World.  With Colin back to direct it, we knew we were in safe hands.

Bryce Dallas Howard: I feel exactly the same.  Because we started filming in February and then got shut down in March in 2020, there was this moment where we thought we might not even be able to make the movie.  And everyone in the world was dealing with some form of that question (too), so when we did come back, what eclipsed the concern was the excitement and gratitude that we could go back to work.  (The movie) was meant to come out last year, but as we were shooting the decision was made for this year, and I’m so glad for that because it really feels like it’s time to go back to the movies.  We would’ve been excited no matter what, but because of the circumstances of the last couple of years, we take none of that for granted.

Mamoudou, how did the opportunity come about for you, and what appealed to you most about Dominion?

Mamoudou Athie: It was kind of a headscratcher for me, it was just one of those out-of-the-blue calls.  My agent was like “This director wants to talk with you”.  I met with (Colin Treverrow), had a great 3 hour conversation over lobster rolls in Malibu (laughs)…I love the guy! I appreciate his intrepid spirit.  His willingness to go beyond and, more than anything, his collaborative nature.  All those things felt like I was in safe hands, no matter what.

How was that moment for you when your character got to interact with the original Jurassic Park trio of Sam Neill, Laura Dern and Jeff Goldblum?

Mamoudou Athie: It was mind-blowing! Frightening (laughs) but really heart-warming.  They were so generous and so incredibly supportive.  Everyone in this cast was.  We all tried to bring the best out of each other in a realty beautiful way.

And Jeff, how did you feel knowing you’d be reunited with Sam and Laura?

Jeff Goldblum: I was so excited.  This franchise.  These movies.  Back in ’93 (Jurassic Park) was so spectacularly enjoyable for me to work on.  To work with Steven Spielberg (who was) forever creatively changing.  And then to work with Laura Dern and Sam Neill back then was life-changing.  I was a different person for working with them.  It was Colin who told me, during the shooting of a commercial, who told me “I think we’re going to do a third Jurassic World, and I think there’ll be something great for you, Sam and Laura.” “What? What? What?” says I, and then it came to fruition and we’re there on set in England, in Pinewood Studios where they shoot the James Bond movies, and I am out of my mind with gratitude. 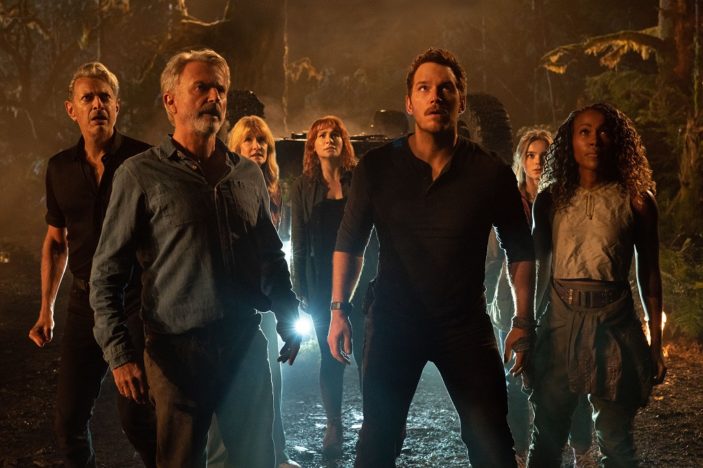 How was the difference in shooting for you, between Jurassic Park and Dominion?

Jeff Goldblum: That’s a good question.  We didn’t know it at the time, at least I didn’t, but we were intersecting with a breakthrough in cinema technology that could bring dinosaurs to life in a way that they had never been brought to life before.  It changed cinema.  Some people compare it to the beginning of sound in movies.  It really was a moment.  When it was new, there was a lot of looking at tennis balls and imagining where the dinosaurs are going to be.  In this one, there was more dinosaurs (built) that you could touch and work with.  It was really, really amazing.

Chris, with these films, as well as those little Marvel movies, has working with effects become easier?

Chris Pratt: I once heard that every time an actor refers to his work as a craft, an angel gets kicked in the nuts, so forgive me angels for saying that, but what we do is a craft, is a trade.  Yes, experience does make it easier.  You develop tools on one job with effects that you may rely on for the next job.  Ultimately, we are piecing together a motion picture, and working with effects requires various techniques that are unique to the creations but don’t necessarily have an impact on the ending.

For example, if you’re working with a CGI creature and you want to interact with it, it’s far superior to have an actual animatronic.  Touching something that’s CGI is cost prohibited…

Chris Pratt: When you have a performance that’s driven by puppeteers, it will change who you are and what you’ve become prepared to do.  Doing this over and over again definitely makes it easier, because it is what? A craft (laughs).

DeWanda, your character, Kayla, truly feels like she belongs in a Steven Spielberg adventure film.  There are shades of Indiana Jones and Han Solo to her.  What were your inspirations in guiding this character?

DeWanda Wise: Honestly, early career Harrison Ford.  Both of those roles had such a swagger and a magnetism that drew audiences to him. He wasn’t the type of hero who announced himself.  He wasn’t loud.  He just had a very unassuming, understated energy.  Everything about him was “You come to me”, and that was something Colin and I spoke about.  How she was constructed I can attribute to Colin.

Every moment you’re on screen you’re so inherently engaging.  And Kayla has so much sass and provides a great deal of comic relief.  Was there any ad-libbing or improvisation on your part in bringing Kayla to life?

DeWanda Wise: Of course (laughs).  It was a gift that Colin gave us.  It was quite an atypical experience for a role of such magnitude.  I love a director, and a writer too, who understands that once a role reaches an actor, they are now the authority.  That’s just how it is.  It doesn’t matter if it’s theatre, TV, or film, by the time that actor reaches the set, they are the trusted authority, and (Colin) really gave us that degree of ownership.  That’s the way I like to work.  I like a lot of freedom.  Like Kayla, I’m not good with constraints.  It is what it is. 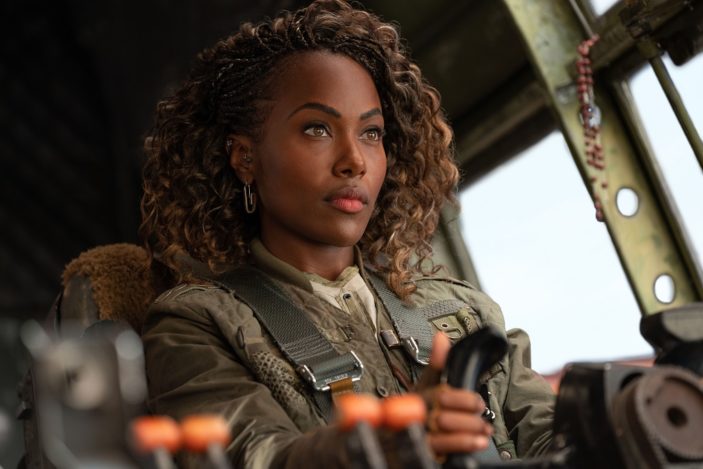 Colin, with this film bringing together the two generations of each series, how did it feel to finally bring closure to a story that was created three decades ago?

Colin Trevorrow: I had to approach it from a place of respect.  We all started as fans, and as fans we tend to hold such things very tightly, but we have to make sure we don’t hold it too tight.  You have to make sure there’s room for these characters to breathe.  I just did a lot of listening.  I listened to Laura, Sam and Jeff about where they thought their characters would be and where they should go.  There’s a real sense of ownership amongst the cast and I.

How did you navigate the balance between so many lead characters?

Colin Trevorrow: Very carefully.  In the process of working with the actors, we made sure that each of them felt like they had a beginning, middle and an end to their story.  That gave me a guide.  By the time we get to the end of the film, I hope when you look at them lined up together you feel they have all been respected, represented and cared for over the course of the film.

As a writer on all three of the Jurassic World movies, did you always have an idea of an endgame?

Colin Trevorrow: There’s a series of images at the end of the film that I did see as a place that we could reach.  That dinosaurs could co-exist with humans on this planet.  How we got there was something that evolved over time.