Interview: Director Andrew Traucki on changing the expected narrative of his shark thriller The Reef: Stalked 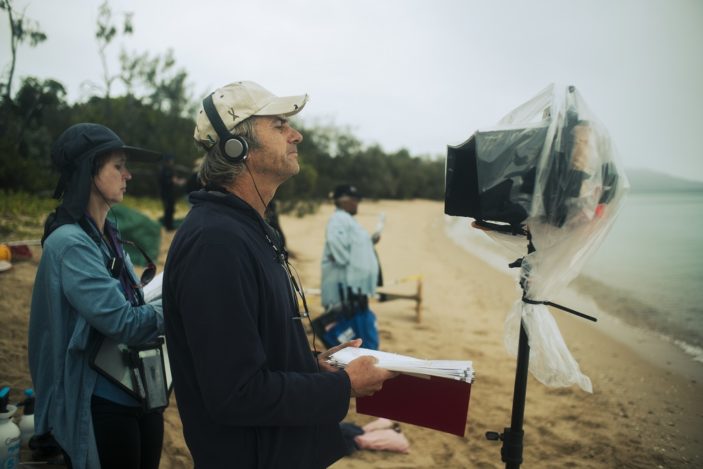 Having directed the landmark 2010 shark thriller The Reef and the similarly themed Blackwater and Blackwater: Abyss, Andrew Traucki is no stranger when it comes to navigating the murky waters of the creature feature.

However, for the upcoming sequel The Reef: Stalked, the acclaimed director wanted to do more than just retread similar water, instead exploring the horrors of domestic violence and PTSD in his bid to subvert the expectations of the typical “shark film”.

As the film prepares to stalk its way into Australian cinemas this week, Andrew chatted with our own Peter Gray about the allegories of his intended themes, what inspired him to explore such an unexpected narrative, and how he best utilises the ingredients of the genre.

I’ll get the serious question out of the way first.  Was having “the man in the grey suit” being used as the description for the sharks a metaphor or an allegory for the fact that the boyfriend involved in the domestic violence narrative is dressed in grey? And he’s quite a predator himself?

Yes, correct. Thank you for picking up on that. It’s exactly what I was trying to do. I was trying to extend the story. So it’s not just a shark story. But there’s an allegory there as well.

Because the opening nine minutes of this film was not what I was expecting, and I like that you took a genre that we’re so familiar with and added this element to it. Was that a conscious effort on your part?

Well, I’m really glad you’re picking up on that, because that’s exactly right. Like, the only reason I really made this film was to try and say more than (what) we’ve seen in a lot of shark films. So I didn’t want to just make a hit list and a body count. I wanted to do something a lot more interesting than that. So that’s right, I added that other element to the story. So that I could be interested in the film, because I just didn’t want to do just a plain shark film, and that the message about this could get out through this sort of thing.

Because you’ve done The Reef and Black Water, were you being offered a lot of these films?  As you said, you wanted to get this message out, so did you ever consider making a film solely based on the domestic violence narrative? What made you want to include it in this film’s story?

I went to a play called Lethal Indifference, which is purely about the domestic violence narrative, that was almost like a documentation of it. And it was incredibly heavy and, at times, almost like a lecture. I kind of figure that if you present material like that it’s not going to be very palatable. So I kind of thought if you could put into some sort of popular culture type thing, and put this message (in) as well, it might travel further and wider and just be a conversation starter around the subject. So it was it was definitely a conscious decision to do that.

Within the genre itself, do you have any favourite films? We obviously think of Jaws when it comes to these types of films, but is there anything that stands out for you?

I always have to pay homage to Open Water, because it was really the film that inspired me to make Blackwater. That was made for so little money, and yet it was a great relationship drama that held together. And that really inspired me. I much prefer thrillers, not just animal thrillers. But if we are talking about animals, The Edge with Anthony Hopkins was one.  I thought that was quite interesting. And then, of course, there’s all this sort of popcorn stuff like Anaconda and all those sorts of things.  But those other films are more where I gravitate to when I want to watch a film really.

One thing that I really appreciated about this was that it looks like it looked like it was filmed in open water. How did you go about finding the location? When they’re sitting on those canoes and it’s just a vast ocean around them, that looks incredible! I think that’s what helps this film feel more realistic too.

Yeah, no, that’s right. I’m a big fan of reality, as you know, (so) I’m gonna keep it as real as possible.  And so we did that again this time. And the secret to that, I guess, is avoiding all the tricks of the trade, like green screen and CGI and all that sort of stuff.  We did shoot off a beach, which, you know, was impossibly difficult at times, but we got through it.  We’re in wet suits all day, and the wind was blowing and the rain and all the elements, you know, all the problems you have shooting outdoors occurred.  So it was pretty tough. But I think it really helps the film in the end have that sense of authenticity, really.

I always find that when it comes to thrillers or genre pieces, silence is just as important as a big score. The scene between Lisa (Kate Lister) and Annie (Saskia Archer)? The tension there is next level. How do you go about knowing what you want to accompany and what you want to leave as more naturalistic?

Yeah, that’s a great question. Look, sound, I think, is so much a part of thrillers.  I made a found footage film called The Jungle, and, of course, in found footage you cannot have a score.  I would ramp up tension without the music, because we would use the natural elements of the jungle in the end to try and do that.  So score is so important. And of course, as you know, (when) the sound drops away we know that, well, subconsciously at least, we know that something’s about to happen. So the editor and I would play with that a lot so that first, maybe one or two times, the silence isn’t the predator, but then on the third? It’s a great game. I love the game of trying to create suspense and get people wrong footed, so they don’t expect it.

The majority of it was real. Of course here are some actual physical props that were used as well. So but yeah, the majority is real stock.

And with the casting being predominantly female, did that link from the domestic violence side of things? I always find female characters in horror films are easier people for us as an audience to become emotionally invested in. And with this film, it doesn’t take long for us to really understand the dynamics and to care about these people. So I think it’s a testament to the casting and to the actresses. But was there a reason that you made the characters in this predominantly female?

In terms of the domestic violence theme, there’s no one easy answer to that question. Obviously, there’s no silver bullet just to stop domestic violence, but in my mind, at least, it feels to me that part of the solutions by speaking up and through collaboration, and so I really wanted to have three women collaborate to get out of the situation, and not just some one heroine with two followers.  I’ve tried to make sure that all the women have their moment, you know, so that it’s more of an ensemble approach, rather than just having the heroine just go and save everyone. That was the main intention to keep it as a sort of a sisterhood thing where they all collaborate to win.

And after both the Reef and Black Water films is there anything that you’re working on? Is the thriller genre where you’ll continue exploring or is there somewhere else you’ll hope to tell stories within?

Yeah, I do.  I have a script that I’m quite in love with called Melodic Vampire Slayer, which is Spinal Tap meets Dracula.  It’s a black comedy about a band, a band of old metal freaks, that are on their last legs, and they rock into a town that unbeknownst to them is full of vampires, and they’ve got to sing or fight their way out of there.

The Reef: Stalked is screening in Australian theatres from July 28th, 2022.