Interview: Dear Evan Hansen director Stephen Chbosky on adapting the stage musical and the isolating feeling of making a film during the pandemic

A coming-of-age stage musical that won immediate critical acclaim from its opening in 2015, Dear Evan Hansen‘s inevitable stage-to-screen adaptation was always going to be a mammoth task to whichever filmmaker dared to take it on.  For Stephen Chbosky, it was a challenge he tackled with open arms.

As the film arrives in Australian cinemas this week, our Peter Gray spoke with the director about what it was that made him want to adapt the stage production, the process behind adding and omitting certain musical numbers, and how the isolating feeling of making a film entirely throughout the pandemic assisted in relating further to the story’s content.

I was holding myself together for the most part of this film, and then Julianne Moore had to go and sing THAT song towards the end.  I’m man enough to say I shed a tear, so thank you for that.

You’re welcome (laughs).  By the way, when I saw it on Broadway the same thing happened to me.  I was like “Okay, I’m along for it”, and then that song…I almost ugly cried.

Going off Julianne Moore, the cast here is phenomenal.  When thinking of actors you want on board, is there ever that fear that someone you want won’t be able to sing?

Yeah, of course there is.  It was kind of a pre-requisite because we wanted to do live singing, so we couldn’t really fake it.  It’s always something of a consideration, but it’s not a concern.  You talk to the music team and ask if they can sing and they say yes, so we move forward.

What was it about the show that made you want to adapt it?

I love the themes.  I love what it was about.  I thought it could do a lot of good things for people.  I had some experience with that with (my book and movie) The Perks of Being a Wallflower, and I saw it as a companion to that in some way.  But the main thing I loved about it, and why I thought it would make a good film, was how truly surprising the story was.  At times it takes some dark turns.  I think if people thought “Oh, he’s such a nice kid and he has some struggles”, that’s one movie.  But this is like “He did what?!”, and with every turn of the page I was just on the edge of my seat unsure of where it was going.  I loved Steven Levenson’s screenplay.  I think about that song “Requiem”, and how you’ve got three people singing “I will sing no requiem tonight”, and it’s admitting that darker, angrier side of people that are left in the wake of a suicide.  I thought it was very poignant and very true.

I embraced the challenge of turning a thousand-seat communal experience in the theatre into having that same kind of feeling, even though it’s a completely different set of circumstances. 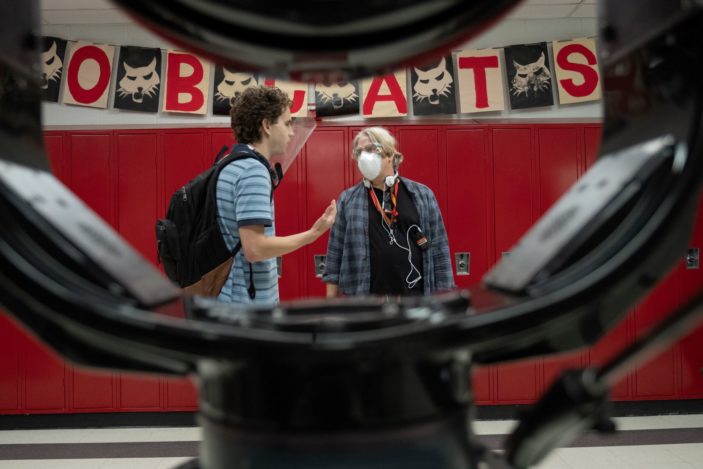 Most of the musical sequences from the stage show have been kept.  There’s a few omissions, but how do you decide what songs stay or go? And in the case of Amandla Stenberg’s character, adding an extra song just for her?

We knew that the running time should be shorter than what it was on stage, just because of audience expectations and attention spans… we wanted to be mindful of that.  We wanted this to appeal to folks and how they’re living right now.  As you mentioned with Amandla and that amazing song (“The Anonymous Ones”), we wanted to give (her character) Alana more than what she had on stage in terms of screen time, in terms of character, and some of the things she’s hiding.  We also wanted to give Evan time to have more redemption and go on that journey of who Connor was.   These are things you can’t do on the stage as much.  We had to make room, and we asked ourselves “can the narrative do well without this song?” and once we took (certain songs) out we knew we could get right to the story.  It unlocked a lot of things.

Having written the scripts for Rent (2005) and the live-action musical adaptation of Beauty and the Beast (2017), do you think that helped you in writing Dear Evan Hansen?

It helped me a lot, yes.  In writing those scripts I knew the other versions.  You look at the final movie and you trace where all the decisions went.  So in watching all the different incarnations, from Michael Greif directing the (Rent) Broadway show, which I saw a dozen times, to Spike Lee almost directing the film before Chris Colombus (came on board), you realise all the different versions.  I had all these different drafts of Beauty and the Beast for Bill Condon, and you learn the craftmanship of it, the working part of it.  When a movie or show is done it feels inevitable, that “it was always meant to be like that” but no it’s the culmination of a million different decisions.  I was very lucky to have all these wonderful directors, whether it be Chris or Spike or Bill, to see how they made decisions which helped me make my own for Dear Evan Hansen.

I wasn’t aware of this but this was a film made entirely throughout the pandemic.  How was that experience?

It was very challenging.  It informed the movie in a really great way.  We all felt very isolated.  We couldn’t travel home, we couldn’t see our families, we couldn’t even go to dinner.  God forbid there was one positive (test), and the brushfire that came from that.  We all had to stay in our own (bubble).  Basically I was alone for four months, and I related in a much deeper way to Evan’s character being alone.  I remember this one scene where Evan comes home and his mother isn’t there, she can’t join him for something (they had planned) and he just sits there, and I deeply related to that.  We even shot the scene in a way that could be felt, because I had been there for months.

At the same time there’s a positive to all of this.  When the masks come off and the characters could interact with each other… it was like they were shot out of a cannon! Same with the crew.  We hadn’t worked for six months, in some cases, and we were all very grateful to be there, and we gave it our all.