Interview: Claudia Doumit on labour of love, Dylan & Zoey; “This film feels like a safe space for trauma.” 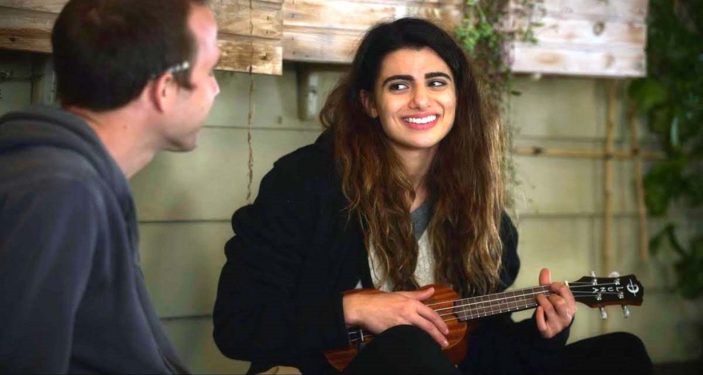 Australian-born Claudia Doumit may best be known for her deceptively sinister turn as Victoria Neuman in the television series The Boys, but it’s roles in films such as Dylan & Zoey that should truly keep her on the map.

As the indie drama releases in US theatres and On Demand, Claudia spoke with our Peter Gray about the film tackling serious subject matter in a safe way, and how her real-life relationships were navigated on-screen.

I spoke to you at the screening of The Boys many months back now, and you were perhaps my favourite person there, so it’s very exciting to talk to you again.

(Laughs) I didn’t have crazy eyes the entire interview?

I certainly didn’t mind.  You were just enjoying yourself.  But it got me thinking that with The Boys and the character of Victoria, do you find yourself being offered roles that are similarly in tune with her?  It makes the departure for this film all the more exciting.

The film has so many conversations that, for me personally, definitely resonate with being queer.  And it just made me note how wonderfully organic the film was.  Was there a place of authenticity that it was born from for (director and writer) Matt Sauter and (writer and co-star) Blake Scott Lewis?

The film is inspired by lived experiences.  So I know Matt has his own personal trauma around sexual assault, and he’s been so incredibly brave with sharing that story.  I think there’s definitely authenticity to it.  And I think having someone tell this story, who understands it on a personal level, is really important to this kind of subject matter.  I feel really honoured to be able to be a part of a story that is covering this subject matter, and that talks about it in a really lived-in way.  I feel very lucky to have had Matt as our director, because he really cares about this story and telling it properly.

I think we went through 12 drafts of the script (and) we lived together, Matt, Blake and I, in my apartment for two months leading up to the film, and we had multiple rehearsals and conversations, and every question got answered.  There was really no stone unturned regarding this film.

I was going to ask about the rehearsal process.  You played off each other so well, and as you mentioned that you lived together which helped in that on-screen translation.  Was there anything you did in particular to get your characters to where they are?

The beauty of the film was that everyone involved in it has known each other…we’re all friends.  I’ve known Matt and Blake for…five years? Oh, wow! Yeah.  And it all came about in such a beautiful, interesting way.  Matt was living in Colorado at the time, I think Blake was in New York, and I was in LA.  We all went to acting school together (so) that’s how we all met.  Matt sent me the script and wanted my thoughts on it, and I absolutely loved it!  (Blake and I) booked a flight to Denver, and we had a table read at Matt’s family house on his backyard porch, and after that read through we just decided we wanted to make this film.  I think it all came together within a year after that.

This film truly is a labour of love.  We had a skeleton crew, we shot everything over the span of two weeks all over LA.  We pulled every favour from every friend that we knew to make Dylan & Zoey come to life.  It really wouldn’t have been possible without the community around us.  So many friends and family really came together for this film.  It was a nice moment of having your cake and eating it too.  The reason the chemistry reads and the relationships read is because they are real to a degree.

Some of the conversations around sex here are incredibly awkward, but it feels necessary, so I just want to thank this film for putting some of those realisations out into the world…

I think that was the intention of the film, you know, to make it as real as possible.  Especially when tackling subject matter such as this.  There’s no way you can tell this story truthfully without….I think I’m going to go into my diatribe about rape and film…

I think a lot of times in film when we see the subject matter of rape handled (it’s) in quite a brutal manner.  It’s almost fetishized.  It’s exploited.  I watched a film with a friend of mine a few weeks ago, and there was a rape scene that lasted four minutes.  I don’t need to see that.  I don’t need to see (that) to understand the effects I can get in 10 seconds.  It’ll still affect me.  I think a lot of times films tend to show the trauma itself which can act as a trigger and be exploitive.  There are many ways to visually portray a traumatic experience such as this, without the viewer having to watch a prolonged rape scene.

I think that’s the beauty of a film like Dylan & Zoey (because) we don’t ever see the traumatic experiences, but we feel their effects throughout two main characters (and) their story.  This film feels like a safe space for trauma.  I think that’s so important.  I wish more filmmakers would address this type of subject matter, or anything traumatic, in this way.  So often I see (films) that lack sensitivity or compassion.  That was the goal with this film, to handle (the subject) with compassion and really make it a space where we can encourage positive conversations around these subjects.

I agree.  Suggestion is always so much more of a powerful tool, and so often are we being shocked for the sake of shock.  That’s what was so wonderful about this film, that these conversations were being had and you’re seeing that human connection and reaction.  It’s the most powerful thing.  Watching this I thought of the film The Skeleton Twins, in terms of how it dealt with the subject in a very organic manner.

Oh, that just gave me chills.  That is an incredible film.  Yes.

Dylan & Zoey is screening in North American theatres and available On Demand from November 11th, 2022.  An Australian release is yet to be determined.