Interview: Cate Blanchett and Nina Hoss on Tár; “You have to know when people can take a harsh criticism or when they’re not ready to hear that.” 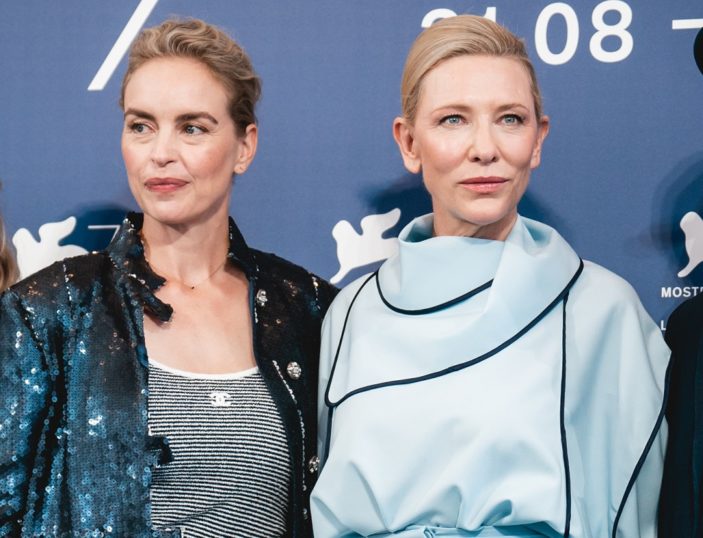 Nominated for her record eighth Academy Award for her latest role as Lydia Tár, Cate Blanchett‘s turn as the titular character in Todd Field’s Tár is a tour-de-force performance that speaks to the strive for perfection within the world of art and a female’s abuse of power.

As the film releases nationally in Australia, Peter Gray spoke with both Cate and her co-star Nina Hoss about the complexities of their characters, the musicality required of them, and the film committing to refuse simple answers to its brutal questions.

Tár is a story about how much we can tolerate in the pursuit of excelling at our art.  Where do you think we draw the line on that, Cate?

Cate Blanchett: Gosh, it’s an ever-evolving thing, isn’t it? It’s the eternal question.  I don’t think it’s just the artistic practice.  I think in many, many industries people strive for excellence and to make breakthroughs, and often to do that you need a very brutal inner critic.  You need to be quite harsh with yourself.  In this instance you have a conductor, she’s a pianist, but her instrument is a human instrument.  It’s the orchestra.  And sometimes that harsh internal critic is expressed externally.  A lot of people take offence to that.  For me personally, anytime I have broken through a barrier it’s because people have told me the often brutal truths that are difficult to hear.  Often a director has to tell you “That isn’t working” or “That isn’t good enough”, and you have to take that without thinking it’s a criticism.  They’re not saying “You can’t act”, they’re just saying that they haven’t got it yet.

It’s hard, because you have to be able to read a room well when you work collectively.  You have to know when people can take a harsh criticism or when they’re not ready to hear that.  When time is of the essence, and this film is very much about time, it’s a very complicated dance.

Nina, how did you find Todd’s own musicality assist in the authenticity of the film? Especially those concert scenes?

Nina Hoss: That’s the incredible thing.  Todd is a musician himself, so he has an incredible ear for music and for sounds, which you can hear in the film.  He’s so precise.  Maybe because conducting is a freer artform, but I could see how he would get slightly nervous if the bow I was holding wasn’t sitting right.  The camera was shooting from every angle, so it had to be perfect.  I told him “I’m going to get there.  Give me time.” (Laughs).  He demands so much from himself, but he does it in a way that doesn’t feel like he’s demanding it.  You feel encouraged to strive for the same.  You reach that moment where Cate is conducting a real orchestra, and I sit in the middle of this and we make music together.  It was incredible, and that was due to the immense trust that Todd put in all of us.  It was very helpful to have him there as a director.

Cate, there’s amusing chatter on social media around Lydia Tár and that people wish to write about her as if she was real.  How have you found that interest in this character? And is there a difference, for you, in tackling a character that’s based on a real person as opposed to being a creation?

Cate Blanchett: I am incredibly heart-warmed by the fact that we no longer have possession of the characters in this story.  It’s now being claimed by people and by a demographic that I could only have dreamt would engage with the film.  On the surface it’s about a middle-aged woman on the brink of collapse in the classical music world (laughs), it feels so remote.

As for the approach? You never know where the inspiration for a character will come from.  Whether that character exists or not, you have to imagine that they do really exist.  You have to work in concept with the other actors.  You have to dance with the cinematographer and the camera operators and, primarily, with the director.  It was essential to know how Todd was going to look at the character, and therefore how that character was going to be perceived.  I could have played this role a myriad of different ways, but what he said was from the beginning he wanted to be inside (Lydia’s) head.  It was like a fly on the wall.  That invited a particular type of performance style.

There’s an almost genderless quality to Lydia.  In some ways she acts like a man, or what we expect from a man.  Was that something you discussed?

Cate Blanchett: In the classical music world in the film here, the way Lydia grew up in that geographical and socioeconomical upbringing, she didn’t have people to model herself on.  She looked at examples of male maestros.  If you find that it’s because that’s what her modelling was.  The other thing is, and I think Todd examines this in the film, is that power is a force that exists irrespective of gender.  Often we feel uncomfortable when women wield a position of power in a way that is uncompromising.  It’s seen as not particularly feminine or “likeable”, so I think that’s still something up for discussion.  I don’t think the film gives an easy answer to that.

Tár is screening in Australian theatres from January 26th, 2023.