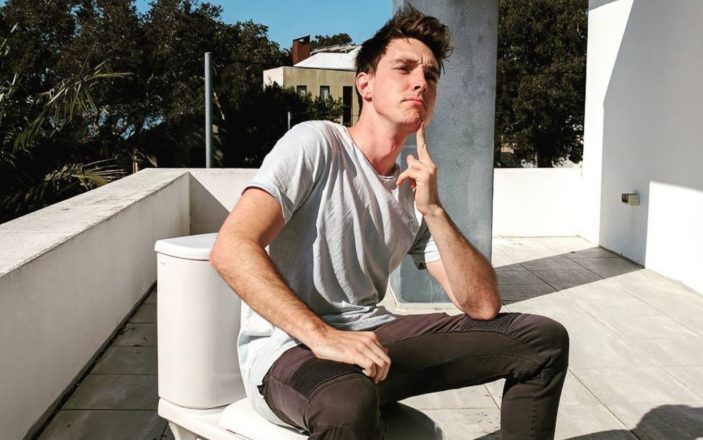 Having earned his prolific status in the gaming world through his commentary videos and comedic riffs, Australian YouTuber Lannan Eacott, aka LazarBeam, is upgrading his screen configuration to those of the theatres.  Earning his own credit among the likes of Ryan Reynolds, Jodie Comer, and Taika Waititi in the new virtual comedy Free Guy, LazarBeam chatted with our own Peter Gray as the film releases across the country.  Talking from his locked down abode in Sydney, LazarBeam touched on how he became involved in the gaming world and what led him to the silver screen.

I’ll admit to knowing very little about the gaming world, especially in these modern times.  My only true venture was as a child and perfecting Goldeneye on Nintendo64.  Before we get to Free Guy, I’d love to know how you got into the medium itself.

We had a Super Nintendo, my mum used to play Donkey Kong, my brothers would play Pokemon, and I would just always want my own Game Boy and stuff like that.  I was always a bit shy and socially anxious at school, and when I felt the world closing in on me gaming was just this outlet for me to go to a different world where I could relate to people when I couldn’t relate to the communities in my own world.  It was a comfort blanket for a long time for me.

Your subscriber numbers are huge and collectively you’re at about 7 billion views, was there a moment for you that you felt was the changing point? When you noticed you had a substantial following…

There’s two stagers to my career.  I was a YouTuber, and for a couple of years I struggled with my channel, a different channel, and I was getting nothing.  When I made this new channel, the LazarBeam channel…I’m a big fan of American sport so I started making videos about that.  I had a different perspective, I had a funny accent that the Americans love, and I just started sharing that and they almost immediately were getting one to two thousand views.  It was a slow build from there and before I knew it I had hit 100,000.  It was instantaneous.  When Fortnite came along it went to a whole other stratosphere.  Obviously now I don’t play too much now, but I owe so much to it.  It doesn’t feel too different though.  It’s driven by passion and purpose, it’s never about anything else.

I know, for me, that films and writing about films has always felt like a necessity and it has certainly kept me sane during this last year of lockdowns.  Has that been the case for you with your content?

Oh, absolutely.  I was a gamer regardless.  I did construction for a bit too, but I knew it wasn’t for me.  I’m a bit of a dweeb, so as soon as I could turn (gaming) into something I could do for a living then nothing else mattered.  It didn’t matter how many subscribers I was getting, how much money was being made, as long as I felt validated with a career I cared about, that’s what felt so good.

Onto the film itself, I was fortunate enough to see early footage of the film a couple of months ago and to speak with director Shawn Levy and some of the creative crew.  Just going off their energy alone, it must’ve been a great environment to be around.  How did you personally get involved?

They just wanted gamers to make it feel more authentic, which I think they did a great job of.  I was just making Fortnite videos in my pyjamas and they hit me up and I thought “Alright! This makes no sense why you want me, but I’ll go over there, sure!” They were the most wholesome, welcoming, caring people.  You can tell Shawn has a lot of experience working with people that have no idea what they are doing, cause I have never acted before.  He was so understanding and respectful, he kept asking questions about if things surrounded correct, if this is what gamers would do…he did his best to understand the gaming world and I can’t thank him enough, he was so lovely.  Never got to meet Ryan Reynolds though.

Well, there goes that question

Given that Shawn Levy was so specific about the correct lingo, did he ever let you adlib your own lines or did you have to stick quite closely to the script?

I only ever saw my part of the script, I didn’t read any of the rest.  He did ask random questions about gaming but I was basically able to re-write everything I said in the movie to make it sound like me.  I don’t know if it purposely came out the way I would say it because there still is 45 people staring at you as you’re speaking, so it was intimidating, but he definitely gave me (the opportunity) to say what I wanted.

As you said earlier about owing so much of your profile to Fortnite, and I believe they made a skin for you?

They made me a skin, they did.  I wanted to honour my old construction job.  It’s what my family still does, and what they’re always going to do, so that was surreal. They questioned everything (too).  I found it quite tough to come up with a concept, but they were fully open to everything.

Free Guy is screening in Australian cinemas* from August 12th, 2021.