Interview: Australian director Gregor Jordan on adapting Tim Winton’s Dirt Music and how the global pandemic is altering the industry

Behind the scenes image of Director Gregor Jordan on the set of DIRT MUSIC. Photographer credit: Kerry Brown

The latest film from acclaimed Australian director Gregor Jordan (Two Hands, Ned Kelly), Dirt Music is a gritty, sexy drama with a haunting love story at its heart set against the powerful backdrop of Western Australia’s evocative landscape.  Based on the novel by Tim Winton, the cinematic adaptation will be coming to Australian cinemas in the latter half of the year, courtesy of Universal Pictures.

Of course COVID-19 might have other plans, and the pandemic that has rocked the entertainment industry was just one of the subjects The AU Review’s Peter Gray talked about with the director as the film’s trailer exclusively launches across Australia this morning.

I must say, there’s something quite comforting about watching the trailer for Dirt Music as it gives hope that we will be able to see this in cinemas.

(Laughs) I know! I think everyone’s kinda making it up as they go along, really.  The whole idea of a theatrical release for any movie is abstract, but I guess because Australia has done so well (in containing), the prediction is that cinemas will open soon, and you need to have something on!  I’m over here in Los Angeles and it’s very different, I don’t see how cinemas are going to be open here anytime soon.

I was going to ask you about that.  Even though Australia has been doing so well, there’s the worry that we’ll have to wait for the US as so many of our release dates are tied to theirs.

Yeah, it’s a whole discussion in itself as to where the future of cinema lies and how streaming will affect the business, how that will manifest itself is something no one knows right now.  You’ve got big movies like Trolls World Tour going straight to streaming, albeit you have to pay, but it’s showing how this pandemic has changed the landscape of cinema in an instant…

If it means more Australian movies get national releases, that might be a silver lining to the situation.

Yeah, absolutely.  I’m very happy they’re (Universal) giving it a theatrical release, and a good theatrical release from what I understand.  They’re going to put some money behind it in marketing and give it a reasonably wide release.

You had it preview at TIFF last year, how was the reaction from that?

It was good.  TIFF’s an interesting festival these days.  When I screened Buffalo Soldiers there (in 2001), the movies that got all the buzz and the hype were the ones that hadn’t been sold yet.  They were the new movies that weren’t going to come out in cinemas, and they got everyone excited.  And this time (2019) it was a real opposite.  The big hit movies were Jojo Rabbit, Ford V Ferrari, and Joker…so I guess the people that came to see our film were the ones that would’ve come to see it in the cinema.  The audience that saw it, they loved it!  You could feel the reaction that the movie was playing well. 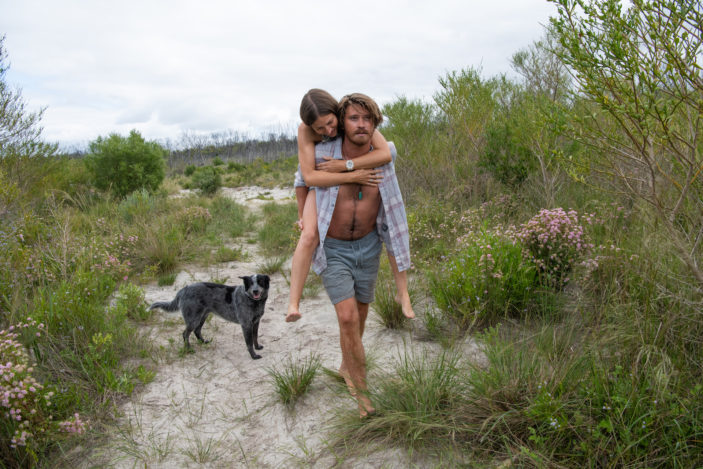 I understand that this movie has long been in development.  At some stage I think Russell Crowe, Heath Ledger and Nicole Kidman were all involved…how long had you been attached to the film?

It was with Phillip Noyce for a number of years and there were many reasons why his version of the film could just never get going.  I think budget was the main reason, I don’t think they could work out how to make the film they wanted for the right price.  He let the option lapse, and Finola Dwyer (the producer) picked it up clean, so the version that we got has nothing to do with the previous one.  There was one night where a mutual friend of ours, Sam Neill, brought her to a dinner party that I was hosting.  This was in Capetown, South Africa of all places!  And we got to talking, and she asked if I liked Tim Winton, and if I liked Dirt Music, and I said “I love that book”…and because the book is such a sprawling epic and quite a strange story, I was quite curious to see how the (screen)writer (Jack Thorne) was going to pull it off.

Kelly Macdonald and Garrett Hedlund are headlining the film, and from the trailer their accents sound quite authentic, was there any hesitation in casting them in Australian roles?

Yes there was.  If you were making a movie set in Ireland, you’d start by looking at Irish actors.  And if you couldn’t find the right Irish actors, you’d look for actors that can hopefully do a good Irish accent, as well as looking the part.  That was our philosophy for the casting.  The characters are very specific too, they have very specific elements to them…so finding Australian actors who were the right age, had the exact qualities, as well as being available…it was quite impossible.  So we just wanted to find the best actors for the roles, no matter what.  And actors “act”, they don’t wear their own clothes, their hair can be cut to suit the character…so it was all part of the process, and we had dialect training.  In fact, we had a great dialect coach on hand, they helped with Dev Patel in Lion, and we took a lot of faith from that as his accent in the film was quite immaculate.

The film looks stunning from what I can see, were there any challenges in shooting on location?

That would be an understatement.  It was extremely challenging, probably the most challenging experience I’ve had in terms of dealing with the elements and the landscape.  We shot off the islands in the Kimberly region (Western Australia) as part of the Buccaneer Archipelago…so you’d fly to Broome and then drive 300kms in a four-wheel drive along a red dirt road just to get to the place we needed to launch boats to start shooting.  These islands are completely uninhabited, and the boats can only come in at a certain distance, so all the equipment we had, the cast, the crew…it was a fantastic team effort but it was really tough! It was crazy hot, 40 degrees all through the day, insects, razor sharp grass…gruelling, but at the end of the day there’s no other place that looks like that, so we just had to suck it up.

Dirt Music is scheduled for an Australian release later this year.