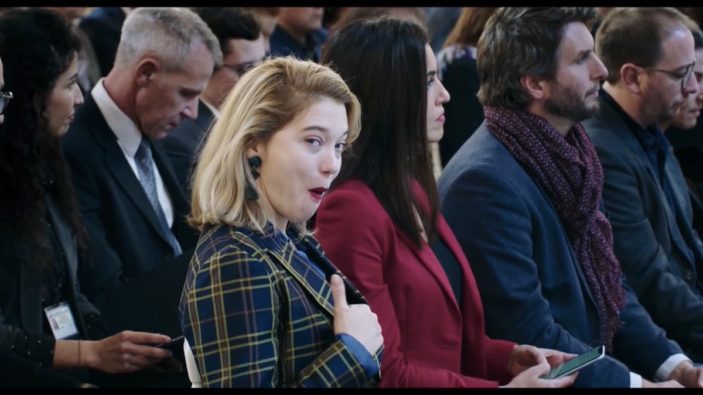 France is the latest film from filmmaker enfant terrible Bruno Dumont; whose filmography is, for the lack of a better term, peculiar. His body of work shifts into many forms of storytelling in ways that they can never be encapsulated in restricted genre terms. From films exploring the idiosyncrasies of life with his debut film The Life of Jesus to the musical biopic Jeanette: The Childhood of Joan of Arc and the farcical murder mystery Slack Bay; it is fair to say that achieving vast acclaim is far from his mind.

France follows the journey of a news journalist and lead anchor named France (Lea Seydoux), an ambitious go-getter who tackles her work with vigour and absolute control; much to the chagrin of some of her fellow colleagues as well as her husband.

One day, she gets into a seemingly minor car accident that results in her accidentally hitting a cyclist. While she has good intentions in doing what she can for the cyclist and her family, her actions lead her to a fall from grace due to the fact that she refuses to fit into what is expected from her by her co-workers, her husband and the industry she works under.

The film blends media satire (the way France stages the news in such a way that she has a militant pose that is amusingly oblivious and contrary with what she is trying to report, being arch melodrama (complete with a hilariously obvious plot turn involving betrayal) and fluid comedy (the opening scene involves more pantomime facial expressions than several modern feature-length comedies combined) in a way that is inherently amusing if one were to register its meek sensibilities.

France’s journey is essentially a quixotic one as she tries to find meaning behind the work she aspires to. However, even with all the efforts that involve her exerting control or just letting go of her preordained sense of autonomy, she still ends up in the same place in the end. On those notes, Dumont squeezes the humour out of that premise for all of its worth.

Even with the many tone shifts (the tone changes from screwball to deadpan to soapy with speed if not rhyme), the storytelling is the most polarizing element of the film. Thankfully, the film has Seydoux as the lead and she handles the titular role with the emotional dexterity that Dumont requires.

Seydoux grounds the film in such a way that she makes her character believable even as she has to switch tones as fast as the film does. Also providing support is the mesmerizing musical score by the late Christophe; which makes the tone shifts more palatable as it reaches moods that rival the works of Angelo Badalamenti.

An acquired taste though it may be for general audiences, France is Bruno Dumont at his peak and for those who are already in tune with his filmmaking sensibilities should find his latest to be an amusing and peculiar lark. Recommended.

France screened as part of this year’s Toronto Film Festival.