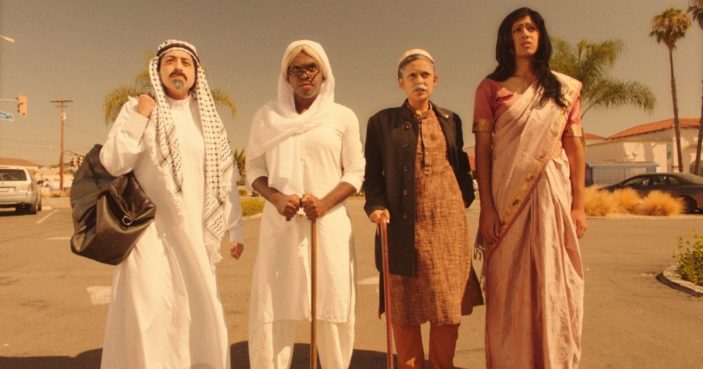 Indian representation in cinema has certainly hit a certain stride over the last few years in moving beyond the character stereotypes and Bollywood-framed imagery that Hollywood so often adhered to.  Filmmakers such as Gurinder Chadha and Mira Nair have been representing their native communities for over three decades with their various theatrical offerings – the former helming such films as Bend It Like Beckham, Bride & Prejudice, and Blinded by the Light, whilst the latter delivered such acclaimers as Mississippi Masala and Monsoon Wedding – whilst such talent as Kumail Nanjiani, Priyanka Chopra Jonas, and the late Irrfan Khan have ensured authenticity in their culture’s portrayals through their own work.

It’s a comforting and needed particular in the industry, and it’s why something like Four Samosas is sure to ring true with its audience too.  It may not necessarily be the type of film that will gel with all viewers – it does feel specifically catered to Indian audiences – but the infectiousness in which it has been created is impossible to deny; it’s also of a more universal benefit that it incorporates a directing style reminiscent of Wes Anderson.

Written and directed by predominant television actor Ravi Kapoor, Four Samosas is set in Artesia, also known as Little India, California, centred around a quartet of friends – Vinny (Venk Potula), Paru (Sonal Shah), Anjali (Sharmita Bhattacharya) and Zak (Nirvan Patnaik) – and their attempt at a grocery store robbery.  Just why they are attempting such an endeavour is revealed to us through a “previously on…” time reversal that sets up each of their personalities, dynamics, and connection to the store.

Heartbreak is the main culprit here, with Vinny, also known as “Big Boy Vin”, an aspiring rapper who is still not over being dumped a few years prior by Rina (Summer Bishil).  She’s only gone and gotten herself engaged too – to Karan Soni‘s Sanjay – and, in a fit of revenge-fuelled rage, Vinny ropes in his cohorts and sets to rob Rina’s father (Tony Mirrcandani) by targeting his store.

Though Anderson’s directing style is clearly an inspiration – as are some of the costume designs (a collective of red tracksuit-wearing individuals known as The Revolutionaries can’t help but feel like an homage to Anderson’s own The Royal Tenenbaums) – Kapoor’s film is an original creation all the same, taking the tested heist genre and injecting his own unique brand of humour into it, culminating in a rather endearingly wholesome film.

There’s certain Indian sub-cultures referred to that clearly will hit a spot with niche audiences, but regardless of its specificity, there’s enough genuine laughs and glorious lunacy to rope the uninitiated in all the same.  A visually kinetic treat, Four Samosas will be hilariously personal for some, but enjoyably bonkers for all.

Four Samosas is screening as part of this year’s Tribeca Film Festival, which is being presented both virtually and physically between June 8th – 19th, 2021.  For more information head to the official Tribeca page.