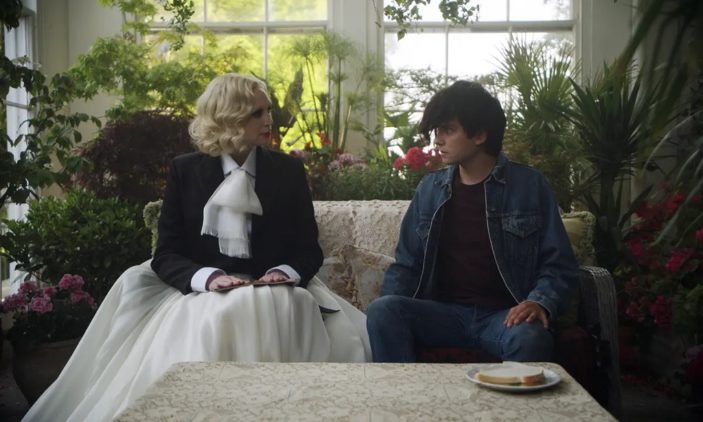 Nobody quite does obscure like director Peter Strickland.  Finding that delicious balance between eccentric and perverse, Flux Gourmet – set over a month-long period in an institute for sonic caterers (yes, that’s a thing) – is perhaps his funniest yet, indulging in the mischief that comes with his unique blend of deadpan dialogue and a reality-removed narrative.

Feeling like a mixture of the auteur’s previous works The Duke of Burgundy and In Fabric, Flux Gourmet incorporates the psycho-sexual rituals of the former and the literal fashion of the latter as he breaks down the barriers between the audible and the edible.  Given how truly and delightfully bizarre this film is, only enthusiasts of the director best be putting their feet forward to enjoy, though the at-times bitingly witty comic material and an erotically-charged, utterly bonkers turn from Gwendoline Christie, Flux Gourmet could trickle over into the arthouse crowd scene on a more accessible level.

Divided into a series of chapters representing the weeks of activity at a sonic catering residency, Stones (Makis Papadimitriou), who also serves as the film’s narrator, is a, for lack of a better word, journalist tasked with interviewing and mapping the artistic process of the three members of the residency’s latest collective; Elle (Fatma Mohamed), Billy (Asa Butterfield) and Lamina (Ariane Labed).  Whilst the three make beautiful music(?) together, their dynamic as a group isn’t without its challenges, and the band’s name, the cross-section of sexual tension over the various intertwined relationships, and whether or not they will use a flanger (an electronic device that alters the sounds of the instruments used) become serious points of contention; the latter particularly a sore point for Christie’s Jan Stevens, the residency’s fabulously attired (and sexually frustrated) host who butts heads with the autocratic Elle over the idea of artistic suppression.

If all that wasn’t enough for Stones to observe and cover, he has his own flatulence issues to contend with, which leaves the on-site doctor (Richard Bremmer, as dementedly gleeful as you’d expect) smirking through his wine sips and Greek literary references, suggesting that Elle’s group utilise his excessive gastric distress for one of their performances; and given some of the other “substances” they incorporate throughout, Stone’s gas would be the most polite of all.

Strickland fans – and the arthouse crowd with a penchant for the stupendously off-kilter – will be so richly rewarded with Flux Gourmet, and as weird as this review has suggested the film is, I have kept much to myself with the intention that audiences will feel more rewarded when viewing with unspoiled ears and eyes.  Gorgeous to look at and stunning to listen to, Flux Gourmet is a kinky delight with one helluva cautionary message to boot.

Flux Gourmet is screening as part of this year’s Melbourne International Film Festival, running in cinemas between August 4th and 21st, 2022, and online through MIFF Play August 11th and 28th, 2022.  For more information head to the official MIFF page.