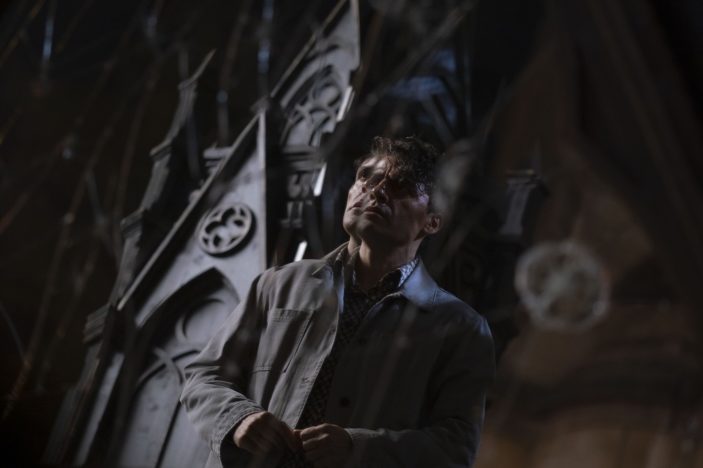 So often favouring spectacle over character development, the comic book action movie has gradually skewered its initial action-centric mentality towards a dramatic outreach (however melodramatic) that speaks to the quality talent the films so often manage to lure.  And for Marvel, not only are their films consistently cast, but their Disney+ series’ have more than solidified their reputation regarding the performances evoked.

The 1-3 punch of Elizabeth Olsen, Paul Bettany and Kathryn Hahn in WandaVision, Tom Hiddleston’s commanding turn as Loki, and Hailee Steinfeld’s scene-stealing efforts in Hawkeye proved the brand can be just as effective outside of their green screen-adorned sets, and Moon Knight appears no different, thanks in large part to Oscar Isaac‘s fascinating dual performance.

Over the course of the first 4 episodes (those that were available to media to review) the series starts off almost too incredibly strong that it can’t help but feel like it dwindles into the kind of narrative sag that plagues so many limited series’; of course, the wild swing it ultimate takes in the closing moments of episode 4 sees it steer itself back onto an unpredictable course that fans should respond to with a certain glee.

Before it gets to that point though we follow Isaac’s Steven Grant, an ordinary Brit working unhappily in a museum gift shop who has been suffering from a series of blackouts that have led him to chain himself to his bed-post each night and tape up his door in a bid to understand whether or not he has left the premises unknowingly throughout the night.

Almost as if Steven is moulded in the same manner as a Clark Kent, only it’s as if Clark Kent doesn’t know he’s Superman, he finds himself waking up in surroundings entirely foreign to him with an inability to control certain aspects of his own body.  After starting to understand what the blackouts are actually related to, Steven learns that he is also Marc Spector, the more alpha (and American) aspect of his personality, who is far more aware of how to embody Moon Knight, the superheroic avatar of Khonshu (voiced by F. Murray Abraham), an ancient Egyptian God.

It seems Khonshu doesn’t always know how to control Marc, and the aggression is only escalating with the emerging presence of Arthur Harrow (Ethan Hawke), a religious cult leader with his own designs on resurrecting another God.  So where does that leave the innocent puppet that is Steven?  He’s just along for the ride, learning that there’s more to his existence than he ever deemed physically possible.

The complications further with the introduction of Layla (May Calamawy), someone important linked to Marc, but who Steven has never met.  Their interactions further the genius of Isaac’s dual performance, with his awkward Steven forming a bond with her that the combative Marc once had but seemingly lost over the course of what seems to be a volatile relationship.  The bickering between the two feels rather standard, and though she initially doesn’t make much of an impact beyond adding a needed femininity to proceedings, she gradually reveals herself to be incredibly capable and just as invested in Steven and Marc’s plight as they are.

At times Moon Knight is an incredibly strange show, and when it leans into its more horrific elements and violently plays on the Jekyll and Hyde concept, directors Mohamed Diab (a prominent Egyptian filmmaker) and Justin Benson & Aaron Moorhead (Synchronic) appear in their element as they balance the sinister with the spectacle.  It’s the strangeness that keeps the show incredibly enticing, and though it’s understandable why it needs to calm itself at times to explain what exactly is going on, the moments it decides to embrace lunacy prove its most exciting; I can only hope the weirdness suggested towards the latter half of the season continues for the remaining 2 episodes yet to be seen.

Throughout it all though, Isaac’s performance never wavers, and even when the show starts to tinker with the expected he consistently pulls you back in.  The confidence, fear and madness that seem to be required to mentally prepare for what it is to be a superhero – and someone who’s unaware of that moniker too – is perfectly encapsulated in his go-for-broke performance.  Whilst I would personally love to see Isaac’s take on this character in his own film, Moon Knight, as a show, flirts with a different Marvel landscape that, like his performance, pulls us in every time we think the brand has shown us their cards.

Moon Knight premiered on Disney+ on Wednesday, March 30th, 2022.  It will continue to release each subsequent episode weekly, before concluding on May 4th.