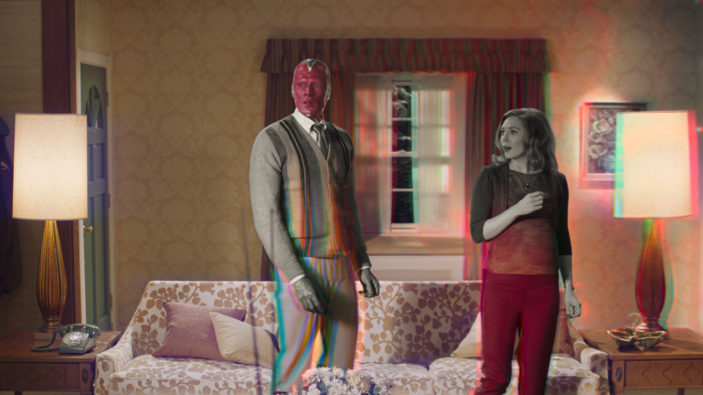 Given that 2020 was unable to give us the Marvel titles we had originally anticipated thanks to a certain pandemic – both Black Widow and Eternals were set for release – WandaVision has somewhat of an extra layer of pressure added to it, now that it is officially both the first taste of the MCU in over a year and the starting point for the next phase of narratives; the post-Infinity saga, if you will.

And because it is arriving during a time where fans are more starved for Marvel content than before, as well as the fact that the latest slate of films will allegedly also be tied into the vast array of series that Disney+ have in store, it will be interesting to see how audiences react to what creator Jac Schaeffer (a co-writer on both Captain Marvel and Black Widow) and director Matt Shankman have concocted.

In the first 3 episodes that were afforded to media for review purposes, WandaVision very much adheres to the 1960’s sitcom temperament it has alluded to in the previews that are as intriguing as they are vague.  We know from the official wording that the show is set after the events of Avengers: Endgame, and that Wanda (Elizabeth Olsen), aka Scarlet Witch, and Vision (Paul Bettany) are living in a state of united bliss.  And, really, beyond that, there isn’t too much more to tell, both because I wouldn’t want to spoil the show, but also because I can’t as these first trio of episodes are clearly laying the ground work for whatever big reveal is sure to come in the following shows; the series will run for a total of 9 episodes, concluding on March 5th.

With the fish-out-of-water temperament and oh-so-wholesome comedic mentality of Bewitched being WandaVision‘s initial inspiration, younger fans may be thrown as to just what they are witnessing.  The effects, the laugh track, the deliberate acting…it’s all too perfectly in tune with sitcoms of an era gone by, and whilst it is absolutely delightful for audiences familiar with such medium, there may be those who tune out from the cheesy, farcical comedy this show so clearly is going to be honouring; in true Marvel fashion though there’s always a suggestion of something more intricate, or perhaps even sinister, on the rise, which makes WandaVision that much more intriguing to view.

If you’re seeking a traditional superhero narrative – you know, basically your standard Marvel movie – it’s best if you do adjust your own footing as WandaVision seems content with marching to the beat of its own bold drum.  It’s laying the ground work for a bigger picture (which is very Marvel of it to do so), but in the meantime it’s enjoying itself as a sincerely respectful homage to the sitcom format, whilst offering Olsen and especially Bettany the rare chance to flex their comedic muscle in the most joyous fashion possible.

WandaVision will premiere its first two episodes on Disney+ on Friday, January 15th, 2021.  It will continue to release each subsequent episode weekly, before concluding on March 5th.