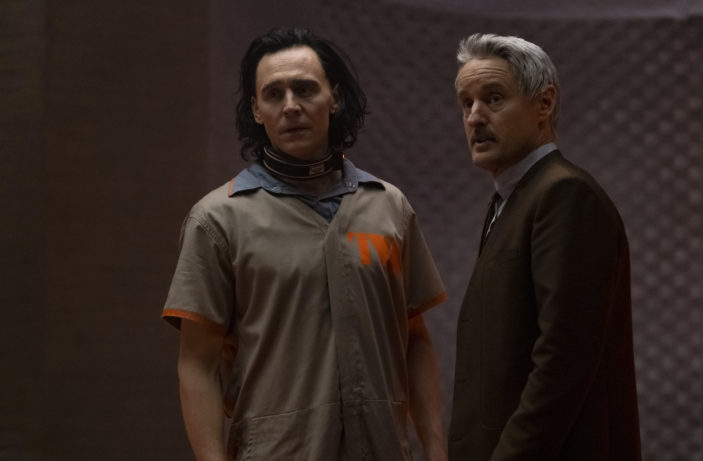 Given how mischievous Loki (Tom Hiddleston) is as a character, it only makes sense that his namesake series follows suit.  A show that, from the first two episodes afforded to media ahead of its Disney+ debut, seems to absolutely delight in embracing the unexpected, Loki continues the more inventive, and oft-humorous, route that served the recent WandaVision so fruitfully, as opposed to the more traditional Falcon and the Winter Soldier.

If you’re wondering how Loki is even afforded his own program after he was killed off by the almighty Thanos in those opening moments of Infinity War, you have little to ponder as the Michael Waldron-created show gives us a neat recap in that the Loki we are set to follow for a six-episode run is in fact an alternate timeline Loki, the one from 2012 who managed to steal the Tesseract from The Avengers.  Remember that?

If you don’t, Loki is clearly not the show to pop your Marvel cherry.

For the rest of the MCU enthused, this show wastes very little time in establishing itself as a fast-paced effort, one that has an awful lot of fun playing (and toying) with the multiverse branch that has already been teased in the last Avengers film, and will seemingly have ramifications pertaining to the upcoming Spider-Man and Doctor Strange sequels.  But that’s getting ahead of itself.  Loki very much wants to prove its footing as its own creation and it manages to do so within minutes, with the partnership between himself and the gloriously named Mobius M. Mobius (Owen Wilson) proving its greatest asset.

The buddy-cop mentality adhered to between Loki and Mobius allows Waldron’s script to shine, with the wickedly smug Hiddleston balancing out the straight-man drollness of Wilson.  Just how they come to work together manages to not entirely be a plot element for the sake of narrative projection either, with Loki’s villainous perspective proving to be of use to Mobius and his Time Variance Authority organisation as they seek out whatever catastrophe is to be planned for intended global destruction.

As to be expected with Hiddleston, he’s absolute perfection in the role, perhaps never better than he is here.  Savouring every arrogant syllable of his many villainous articulations, there’s effortlessness in how he explores facets of his character we’ve seen hinted at prior, as well as virgin avenues that lean into the notion that redemption on his part is truly a believable arc.

Though a six-episode running may seem too skint, the story and detail Loki manages to encompass in these first two alone suggests Waldron and director Kate Herron have embraced these limitations with a vastness that would overshoot the narrative if it could.

Immensely engaging, darkly funny (there’s a dialogue reference to Wes Craven’s original Scream that should satisfy the purists), oddly emotional, and joyfully wild, Loki, like WandaVision, is further proof that when Marvel colour outside the intended lines, they manage their own canvas that’s just as attractive and infinitely more interesting.

Loki will premiere its first episode on Disney+ on Wednesday, June 9th, 2021.  It will continue to release each subsequent episode weekly, before concluding on July 14th.