Film Review: Turning Red is a fantastical family film that speaks to the tribulations of growing up 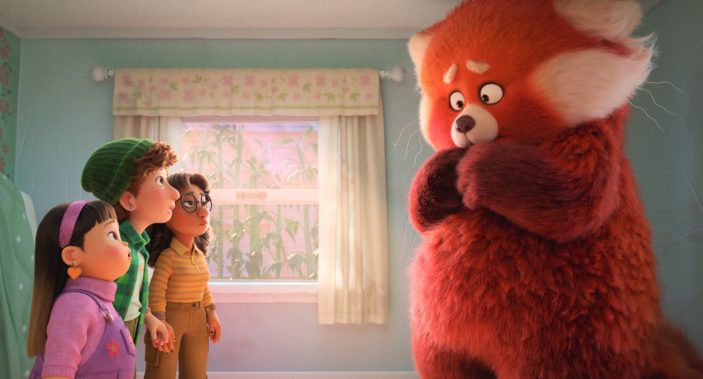 If it wasn’t for the fact that she turns into a giant red panda, the life of Turning Red‘s protagonist Meilin Lee (voiced by Rosalie Chiang) would be considered normal.  She gets good grades at secondary school, has a trio of respectable besties, helps her mother, Ming (Sandra Oh), in running the family temple – when she’s not being entirely embarrassed by her – and she has the softest of spots for her father’s cooking.  See, normal.

Never content with completely presenting a narrative as straight and narrow as it could be, Pixar’s latest project – sadly (and somewhat controversially) premiering on Disney+ over a theatrical engagement – adopts its rather fantastical edge as a metaphor for puberty; here, whenever she gets overly emotional – which for a 13-year-old like Meilin is often – her panda alter-ego emerges in a cloud of red smoke.

There’s been some discourse around the film regarding its universal appeal, as much of Turning Red‘s talking points feel more catered to young girls on the cusp of adolescence.  And whilst that is somewhat true – there’s even a rather bold reference to menstruation (“Did the red peony bloom?”, asks Ming in a misinterpreting moment of just why Meilin “panda’d” out) – Domee Shi‘s consistently delightful film never excludes an audience removed from such experiences.  At its heart it’s a film about growing up, about relationships with both friends and family, and if you have such support in your life then maturing – and taming the puberty beast within – won’t be as daunting a task.

Shi, who co-wrote the film with Julia Cho (a predominant television writer, having such series as Big Love and Halt and Catch Fire to her name), grounds the film as often as she can too, helping the animated edge soften with a realism that very much speaks to its young girl at something of a crossroads in her life.  Set in 2002 Toronto, a yearly setting that helps the film incorporate the sounds of a poppy boyband (a 5-piece group named, inexplicably, 4*Town) moulded in the Backstreet Boys/*NSync model, the intricate detail of Meilin’s surroundings – the worn-in school lockers, the streetcars, etc – centre the film so that when it does indulge in its imaginative elements we still feel a sense of connection.

If you are of the more specific audience that Turning Red aims to talk to, then it will feel entirely personal.  If not, there’s still no reason that such a beautifully realised film can’t be appreciated on its other merits.  Another Disney title that entirely deserved the big screen treatment (joining fellow D+ catalogue members Soul and Luca in the we-deserved-better category), Turning Red finds a neat balance in removing itself from reality whilst keeping its feet firmly planted on the ground.