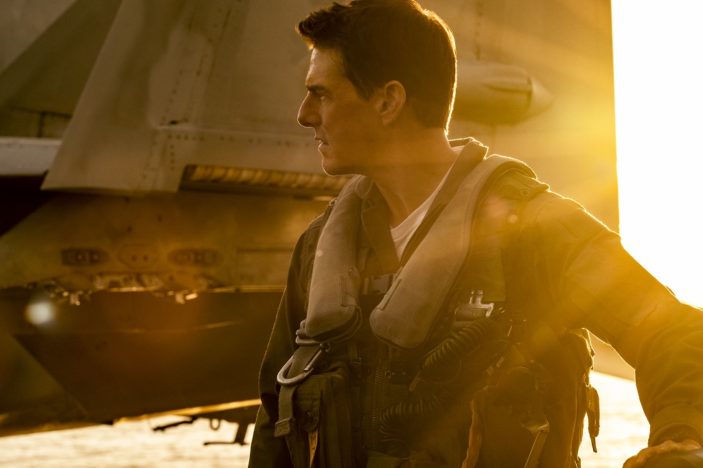 We bow to thee, Tom Cruise: Saviour of cinema!

A film you’ll be best served believing its near-impossible hype, Top Gun: Maverick is not only the type of sequel that surpasses its predecessor in every form imaginable, it’s the perfect encompassment of why cinema matters.

Over 30 years in the making, Maverick reunites Cruise with his Oblivion helmer Joseph Kosinski and organically weaves Tony Scott’s 1986 original throughout in the process, drip-feeding nostalgia without solely relying on it, as Pete “Maverick” Mitchell (Cruise) seeks to untangle himself from a past he can’t alter.

The guilt for which he feels over the death of his former Intercept Officer and best friend, Nick “Goose” Bradshaw (Anthony Edwards), is a narrative point that screenwriters Ehren Kruger (Scream 3), Eric Warren Singer (American Hustle), and Christopher McQuarrie (Mission: Impossible – Fallout) utilise as one of Maverick‘s strongest recurring themes, with the inclusion of Bradshaw’s pilot-in-training son, Bradley (Miles Teller) – nicknamed “Rooster” – transcending what could have been melodramatic material, ultimately earning the film a valid emotional output that offsets its genuine popcorn thrills.

Rooster is one of a squadron of hotshot pilots who are being trained for a classified black op mission, and Maverick is, somewhat begrudgingly, assigned to lead the charge – a gleeful result of Rear Admiral Chester Cain’s (Ed Harris, in the briefest of appearances) intention to either squeeze him out or consign him to the lowest rank legally possible.  Unsurprisingly, Maverick’s charges are a hot-headed, overly confident bunch who fill the character archetypes we expect – the cocky alpha (Glen Powell‘s Hangman), the token female (Monica Barbaro‘s Phoenix), the deceptively capable geek (Lewis Pullman‘s endearing Bob) – and though they heighten the machismo and the drama, it’s Maverick and Rooster’s conflict that the film understandably favours.

The original Top Gun was very much a product of its time, and whilst it remains a glorious re-watch due to how hard it leans into 1980’s cheese and homoeroticism (that volleyball scene, anyone?), it stood the test of time due to being a primarily male-aimed feature that understood the female gaze was equally important, if not more so.  And Maverick revels in this mentality, laying on its charm with a could-be-saccharine sweetness that is continually offset by its impeccably intense action sequences; one minute we’re swooning at the age-appropriate romance between Maverick and charming bar owner Penny (Jennifer Connelly, elevating her paper-thin character with an easy sweetness) before holding our breaths during awe-inspiring fighter jet sequences that define the very notion of what it is to be an action set-piece made for the big screen.

Though this film banks on nostalgia, it never relies on it.  It’s easy to look at Connelly’s character as a replacement of Kelly McGillis’s Charlie, but their relationship here blossoms from a more organic seedling; the shirtless-aplenty beach football scene here is easily a nod to the original’s male bonding exercise (let’s call it that anyways) without adopting quite as heavy a sapphic eye; and Val Kilmer‘s return as Iceman is tenderly incorporated rather than being forcefully shoehorned.  Kilmer’s absence from the screen in recent years has been tinged with a sadness, and though it’s incredibly bittersweet to see him here in a practically mute capacity, there’s such a strength to his relationship with Cruise that you wouldn’t be able to forgive this film had they bypassed such an opportunity.

With more and more films opting for an exclusive theatrical engagement over the apparent ease of immediate streaming, that prospect of cinema is starting to feel as if it’s back on the straight-and-narrow, and Top Gun: Maverick is the epitome of that emotional connection to a simpler time.  This is blockbuster movie making, a joyful blend of the old-fashioned and the new-wave advancements, packaged neatly in a winning underdog spirited tale that’s worthy of both admiration and ovation.