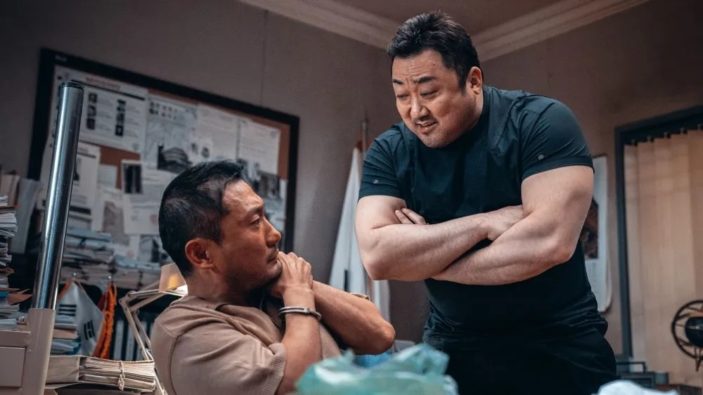 Korean cinema has always been a hub of unmatched quality.  Whilst those that have enjoyed the fruits of labour over the decades aren’t remotely surprised at such a statement – and have been waiting for the world to catch up through viewings of I Saw the Devil and Oldboy – the recent successes of the Oscar-winning Parasite and Netflix’s Squid Game series means a rightful surge in interest has finally made way.  And The Roundup very much epitomises much of what makes Korean cinema so grand.

Though a sequel to 2017’s The Outlaws, The Roundup very much exists on its own accord, tailoring itself to unversed audiences as it sets up a major crime unit and their latest assignment.  Captain Jeon Il-man (Choi Gwi-hwa) and detective Ma Seok-do (Ma Dong-seok) are tasked to extradite a suspect from their previous investigations in Vietnam.  Once there, however, they learn of additional murder cases and of the notorious Kang Hae-sang (an intimidating Son Seok-koo), a vicious killer who has been committing crimes against tourists for several years for money.

Their suspect’s willingness to turn himself in is the first tip that all is not as it seems with this case, and it isn’t long before their pursuit drives them back to Korea, setting off a chain of impeccably crafted (and, at times, wincingly violent) action sequences and extreme dark humour that only these types of films seem to know how to balance in beautifully brutal cohesion; Ma’s hulking frame and uncompromising fighting style opposite Kang’s martial arts-driven abilities proving one of The Roundup‘s many highlights.

The film rarely takes a moment to slow down, yet it manages to still inject enough human elements throughout so that its confronting action never feels as if it’s solely driving the plot; this particularly evident in the film’s back half when a kidnapping narrative is introduced, with the target a wealthy businessman whose son was abducted and murdered in Vietnam.  Given all that is taking place it’s easy to suggest The Roundup is adhering to a too-many-cooks temperament, but Kim Min-seong‘s script manages to control the chaos, with the film always feeling in control of its kinetic energy.

Though The Roundup is as grand as it is, there’s an irony in that in relation to cinema from Korea it’s relatively unsophisticated, but given the recycled mentality we are so often presented it feels so much more revelatory.  That being said, unsophisticated doesn’t equate to a bad film in any form, as The Roundup is stylish, energetic, witty, impossibly crowd-pleasing and, hopefully, a further gateway for audiences to indulge in what makes Korean cinema so intoxicating.

The Roundup is screening in select Australian theatres now.  It opened in select U.S. cinemas on May 20th, 2022, following a South Korean release on May 18th.