Film Review: The People We Hate at the Wedding lives up to its title as it wastes a talented cast on a tired premise and unlikeable script 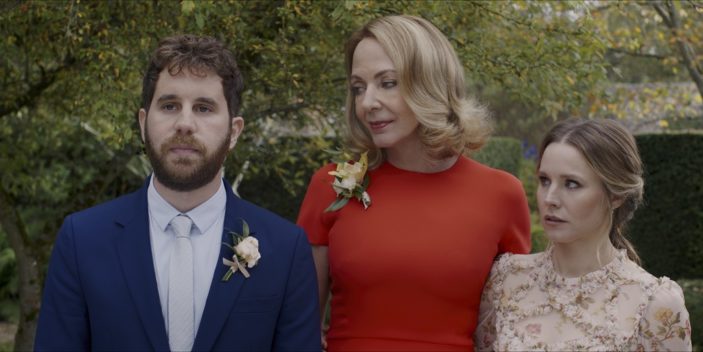 Well, we can’t say we weren’t warned that with such a title as The People We Hate at the Wedding we’re unprepared to be subjected to people at a wedding that we do indeed hate.  A “comedy” that commits the cardinal sin of trying to make its hateful characters relatable and forgivable of their actions, Claire Scanlon‘s effort wastes a supremely talented cast on a tired premise and a lazy script that refuses to move beyond a self-absorbed mentality.

The type of plot that hinges itself on misunderstandings that could easily be cleared up with a simple, grown-up conversation, The People We Hate… hopes by casting affable types like Allison Janney, Kristen Bell and Ben Platt (Dear Evan Hansen not withstanding) and handing them supposedly “scathing” dialogue that we’ll take some delight in their general disregard for those around them; Bell managing that balance supremely more successfully in The Good Place, and Janney in…well, most things she’s done, really.

Just why these hateful people are at the titular wedding is because mama Donna (Janney), many moons ago, had a daughter, Eloise, with the womanising Henrique (Isaach de Bankolé), but, in throw-away reasons mentioned during the opening credits, opted to start afresh with another man and had two more children, Alice and Paul, raising them in the US whilst Eloise would sporadically visit from the UK in hopes of staying connected to her mother and half-siblings.  What should be a happy, harmonious blended family is anything but though, as Alice (Bell) and Paul (Platt) grew up into suitably cranky people who have seemingly gone out of their way to live the most miserable lives they can possibly organise.

Alice, sleeping with her married boss (Jorma Taccone), and Paul, struggling in his union with the wants-to-have-an-open-relationship Dominic (Karan Soni), have never warmed to Eloise (Cynthia Addai-Robinson), due largely to her wealth and more accepted social standing.  It would maybe be half-way acceptable for us as an audience to similarly dislike Eloise if she flaunted her wealth in an unseemly manner, but, apart from shouting expensive dinners and upgrading their hotel suites on their UK visit, she’s actually a very level-headed person, which puts the film something on the backfoot in its attempt for us to ever like the people framed as hateful.

Through a series of mishaps – Eloise’s hens do isn’t the regal celebration she had hoped for, Paul and Dominic attempt an awkward threesome, and Alice contends with both the wrath of her boss’s wife and completely disregarding the clearly smitten, impossibly nice Dennis (Dustin Milligan) in the process – the Ashley Fox/Margot Hand-penned script hopes enough situational shenanigans will make up for the fact that none of what we’re watching is remotely witty or fresh.  That’s not to say there aren’t a few giggles peppered throughout – ironically, two of them coming from the blink-and-you’ll-miss-them appearances of Randall Park and D’Arcy Carden in truly random cameos that leave more questions than answers – and any film that continues to promote Paddington as one of the greatest films ever made deserves some credit, but the actors being likeable in all the way their characters aren’t doesn’t translate to us enjoying ourselves as viewers.

Living up to its title, but also not leaning in enough for us to truly delight in such wickedness, The People We Hate at the Wedding may seem like a passable comedy worthy of your streaming minutes off its cast alone, but I dare say that even they won’t be enough to follow through and stay for the reception.

The People We Hate at the Wedding is now streaming on Prime Video.