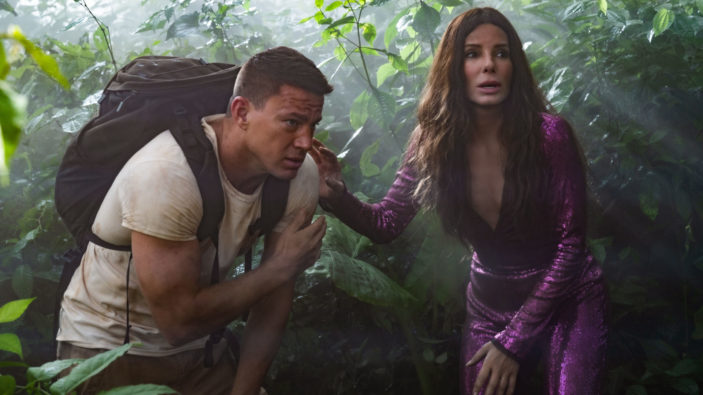 Reminiscent of the studio mentality of days (years, even) gone by of when the star-driven comedy was enough of a draw to reel audiences in, Adam and Aaron Nee‘s throwback romp The Lost City serves as a healthy reminder that not all playful, high-concept comedies have to exist solely for the streaming services.

Resuscitating the silliness and admitted disposability of the action-driven romantic comedy, the pure charisma of Sandra Bullock and Channing Tatum is on full display, toe-to-toeing with each other comedically as the outlandish plot only heightens their capabilities as genre performers.

Hoping that an act of heroism will prove he’s more than just his looks, Alan takes off for the jungle, recruiting the impossibly handsome, endlessly resourceful Jack Trainer (Brad Pitt, in a hilarious extended cameo that serves as the film’s highlight) as his guide.  The subtle pissing contest mentality between Tatum and Pitt speaks to the script’s strength in the film’s front half where it rarely lets up, constantly zipping with biting character interaction – Da’Vine Joy Randolph and Patti Harrison also managing their share of laughs as Loretta’s publisher and social media manager, respectively – and over-the-top set-pieces.

Once Loretta and Alan are reunited and the film sets them on a more traditional path of uncovering the hidden treasure, all the while unknowingly falling in love with each other, The Lost City admittedly loses a little of its steam.  By no means does the film dwindle in its entertainment value, but after running out the gate with such vigour it was always going to be an ask for its energy to maintain itself, and the film’s back half stays afloat solely because of Bullock and Tatum’s back-and-forth; although a slightly unhinged Oscar Nunez doesn’t go astray as a questionable pilot who seeks to help Randolph as she too opts to play the saviour.

Indulging in its ability to not take itself seriously, the Nees have crafted something truly winning out of such a formulaic convention.  Smart enough to know to lean on its star appeal, but also flexing enough intelligence to know the material – however well-worn – needs to at least complement their chemistry, The Lost City has an endearing, infectious energy that serves as a joyous reminder of the jubilation that comes with seeing a film on the big screen.