Film Review: The lavish costuming of Miss Fisher and the Crypt of Tears can’t compensate for its distinct lack of energy 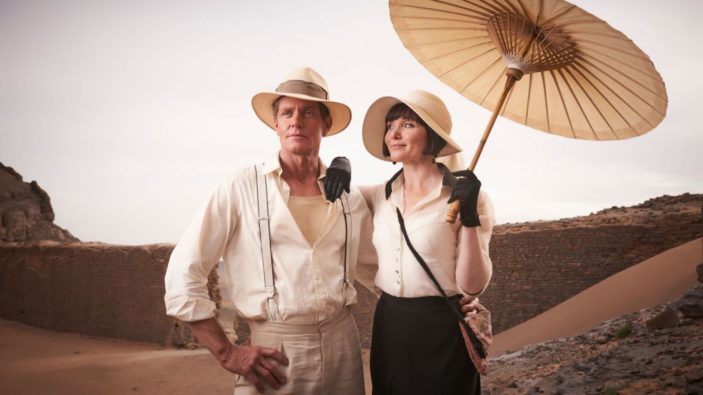 Having never read any of Kerry Greenwood‘s historical Miss Fisher mystery novels, nor seen the television program that was birthed from them, I can only judge Miss Fisher and the Crypt of Tears as someone entering blindly.  And whilst I’m unfamiliar with the show, I’m aware of its structure, and I would assume that a big screen adaptation would up its stakes considerably with stately spectacle and, perhaps, a larger body count.

Alas, no.  I’m sure the fans that made the series something of a cult hit – and are probably many of those that partially crowdfunded this film in its early stages of production – might find enjoyment amongst the film’s attempts at globetrotting grandeur and the titular fashionista-cum-detective’s wily wit, but as much as this sounds like an exciting prospect on paper, the reality is far more lethargic.

Miss Fisher (Essie Davis, doing what she can with incredibly pedestrian dialogue) has a lot of pep in her step, and we see this from the get-go when she swans about Jerusalem in a set-piece revolving around her rescuing a young Bedouin woman, Shirin (Izabella Yena), from prison.  From that outlandish moment to another only seconds later atop a moving train – I say outlandish as Miss Fisher’s costume change is insultingly inexplicable – Deb Cox‘s script is an amalgamation of Scooby-Doo subtlety, cheap matinee theatre, and cheesy adventure films, but unfortunately without any of the charm or humour.

A supposedly precious artefact that looks more like an oversized piece of plastic and a tattoo that doubles as a map are the two main ingredients in Miss Fisher’s latest mystery, one surrounding Shirin’s family and the mysterious disaster that wiped out her village in the process.  There’s also some suspicious nonsense going on regarding Miss Fisher’s socialite associates, The Lofthouse’s, and the “will they or won’t they” mentality of her relationship with long-time interest Detective Inspector Jack Robinson (Nathan Page) hopes to add a bit of bite to proceedings, but sadly fails to capture interest beyond adding to the audience’s eye-roll count.

It’s a real shame too that this film overall just feels so cheap and flavourless, especially considering that it’s a female-led feature.  Miss Fisher isn’t a 20-something go-getter, nor an elderly type ala Murder, She Wrote‘s Jessica Fletcher, and having an empowered middle-aged female leading the charge in a manner that the script wishes to be strong and stylish (well, she does get points for her wardrobe, as impractical it may be) is something worth celebrating, but the character herself is buckled down under hokey shlock and Hallmark sentiment.

Though i’m being quite harsh in my criticism of the film – and I can’t speak to know if the hackneyed, artless vibe of it is a representation of the television show – I’m quite sure Miss Fisher enthusiasts and fans of undemanding cinema may respond in a far more positive manner.  But there’s a distinct lack of energy here, and sadly no amount of opulent locations or lavish costuming can compensate for a film void of verve.