Film Review: The Invitation; serviceable enough to accept or best to return to sender? 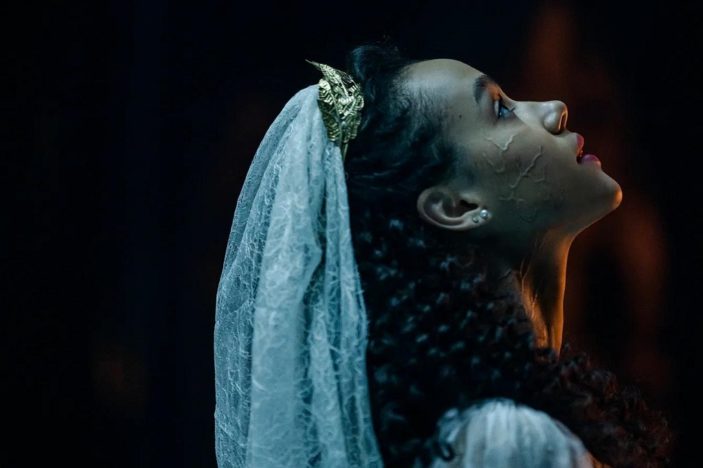 It’s all too easy to wax lyrical these days about trailers spoiling and “giving too much away” for the keyboard warriors who oft decide they hate a film before they even see it.  Whilst the jury is still out on how many will dislike The Invitation, I can attest that, as far as spoilers go, Jessica M. Thompson‘s serviceable horror has been done an immense disservice by the trailer editors who opted to showcase the story’s narrative reveals and twists without so much as a thought as to how it will impact one’s viewing.

Now, I’m not saying it’s a shock that there’s something sinister afoot for Nathalie Emmanuel‘s rather spontaneous decision for her struggling waitress Evie to up her humble New York digs and jet it to the English countryside only hours after meeting Oliver (Hugh Skinner), a supposed distant cousin.  BUT it would have been nice to let the film reveal her long-lost family’s violent nature organically, rather than sit with the waiting that her aristocratic relatives are a vampiric clan intent on welcoming her into the family fray in a particularly bloody, immortal manner.

Similar to Samara Weaving’s unsuspecting bride in 2019’s deliciously macabre Ready Or Not, Emmanuel’s Evie has to fight back against her undead hosts on her own surprise wedding day; yeah, the trailers let that one slip too.  Though the film isn’t exactly working with the sharpest script, it still peppers enough nuggets of intrigue throughout, and as we are under the assumption for the majority of the 104 minutes that Evie is there as a guest for a lavish friend of the family’s wedding, when it’s revealed that her getaway bed buddy, Walter (the devilishly handsome Thomas Doherty), is the groom-in-waiting and it’s all been a creepy, tradition-based ruse to merge her bloodline with his, we aren’t in the slightest bit surprised.

Having said that, The Invitation manages a certain enjoyment factor through its eventual descent into unbridled, subtle-free mayhem.  Emmanuel continually sells the material, even when we know we shouldn’t be buying it, and when she goes toe-to-toe with the statuesque Viktoria (Stephanie Corneluissen) in said unbridled climax – after a series of verbal retorts throughout – it’s so bombastically over-the-top (even for a vampiric-themed horror-lite picture such as this) that we can’t help but surrender to the lunacy.

Calling to mind those mid-range genre pieces that studio Screen Gems rode to financial fruition around the mid-to-late 2000’s and 2010’s, The Invitation is a cheap, though perfectly polished number that lets its aesthetically pleasing cast loose on average material, hoping the set-pieces are atmospheric enough to distract undemanding audiences from how safe the whole affair truly is.

The Invitation is now screening in Australian theatres.