Film Review: Streamline underlays a tragic narrative with commentary on the toxic masculinity within the sporting field 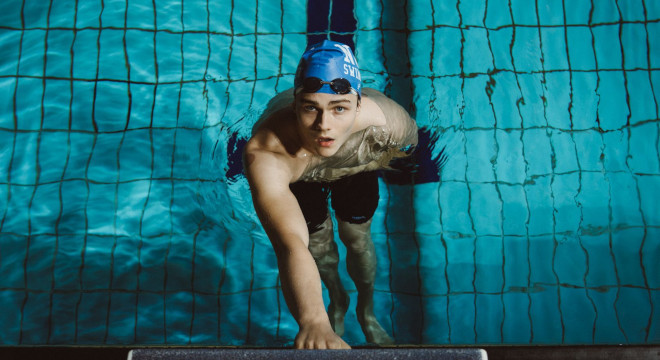 As easy as it would be to accuse a film like Streamline of adhering to the stereotypical tragic narrative that seems to be at the undercurrent of the majority of Australian dramas, Tyson Wade Johnston manages to include subtle commentary on the notion of toxic masculinity within the sporting field – here, specifically swimming – that the familiarity doesn’t feel as maddening.

At the core of the story is Benjamin Lane (Levi Miller, embodying the role in an almost documentary-like manner), a fifteen-year-old Olympic hopeful pushed to his limits daily, through the 3am wake-up calls to train with his volatile coach (Robert Morgan), his gradually strained relationship with his emotionally exhausted mother (Laura Gordon), and the re-emergence of his formerly incarcerated father (Jason Isaacs, perfecting the Australian accent) whose years of domestic abuse haven’t been forgiven or forgotten.

The abuse that evidently littered Ben’s childhood is something that has followed him in the years since, whether he’s aware or not, as there’s a dehumanisation in the fashion that people address him.  So rarely is he ever called by his name, instead referred to as “boy”, almost as if his autonomy is a non-factor in an environment that seems purely designed for him to be little more than a trained muscle to achieve greatness.  That greatness of Olympic potential seems to be everyone else’s desire, with the idea that the almost at-times mute Ben doesn’t want to be a swimmer left deliberately void throughout Johnson’s story.

Though that push for Ben to be great is seemingly coming from a place of pure intent, the emotional and psychological damage it’s causing naturally results in him wanting to rebel, pushing him, ironically, towards an even more violent environment occupied by his estranged brothers (an imposing Jake Ryan and Sam Parsonson) who have both clearly been moulded by the savagery that their father inflicted upon them.  There’s a heartbreaking notion of cyclical abuse that’s present when the film introduces both of these brothers, one, Ryan’s Dave, unable to separate his tenderness from his terrorising aesthetic, whilst the other, Parsonson’s Nick, a victim of his own sibling’s abuse who’s unable to escape from the tragic normalcy of in-house trauma.

With so much dramatic heft on hand, it’s understandable to be concerned that the film won’t offer any reprieve, and, sadly, Streamline maintains a dire personality throughout, only briefly allowing its audience to breathe in a conclusive segment that threatens to rob the film of its dramatic intent; the sports film trope of securing a definitive answer on whether or not Ben’s Olympic ambitions is one cleaved to, incorporating an on-the-nose cameo that, whilst technically making sense, undoes the more fly-on-the-wall shade so much of Streamline paints with.

That aside, Johnston has crafted an impressive debut feature with Streamline, one that announces him as a proficient storyteller and marks a more mature phase in the career trajectory of the impressive Miller.  Already having cut his teeth as a child performer – mostly avoiding any precociousness with turns in Pan, A Wrinkle In Time, and Red Dog: True Blue – the lived-in quality he exerts here showcases his dedication and maturity, so often elevating Johnston’s material with the most minimal of effort.

Streamline is screening in select Australian cinemas from September 2nd, 2021 (where accessible).