Film Review: She Said speaks to the strength of female silence-breakers in the face of abuse and corruption 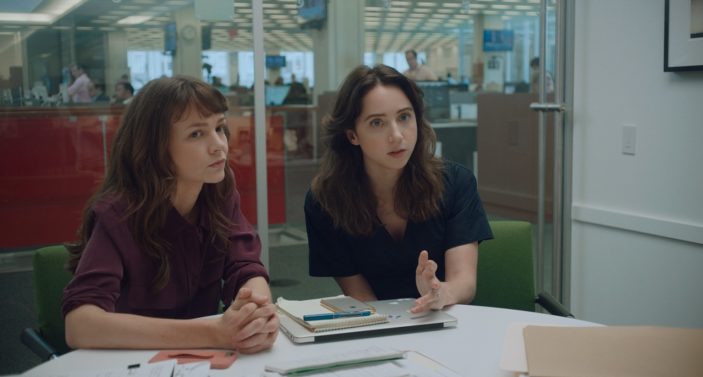 Given the weight and influence that came with the #MeToo movement – founded in 2006 by American activist Tarana Burke – and, by extension (and association), the overwhelming allegations of sexual assault against once-famed producer Harvey Weinstein, it makes sense that a film detailing as such has come to fruition.  Based off the 2017 New York Times Article by Jodi Kantor and Megan Twohey, She Said brings their investigation against the formerly idolized Weinstein to life, with director Maria Schrader (I’m Your Man) delivering a serviceable recounting of their story, with the emotional sensibility outbalancing the slick execution the film needed to truly earn its rank in the upper echelons of journalistic entries in cinema; Spotlight, this is not.

It’s not that the film doesn’t have an entirely captivating narrative, nor a supremely capable cast – Carey Mulligan, Zoe Kazan, Jennifer Ehle, Patricia Clarkson, Andre Braugher, and Samantha Morton amongst the ranked players – it’s that it can’t entirely make the mostly humdrum actions of journalists feel overtly exciting; there’s only so many sequences of phone calls you can watch before it all starts to feel cyclical.  The irony of that criticism isn’t lost on me though, as Schrader and screenwriter Rebecca Lenkiewicz (Disobedience) clearly don’t want to glamorise this line of work, as so much of Jodi (Kazan) and Megan’s (Mulligan) narrative in taking down Weinstein consisted of relentless phone calls, harsh rejections and brutal criticisms; Weinstein himself – here voiced and (mostly) unseen by actor Mike Houston – even rang the two during the latter half of their investigation and threw his power around in a manner that, evidently, didn’t rattle the only two women he conversed with that he wasn’t able to manipulate.

It’s that manipulation that terrified and silenced so many women that so much of She Said centres itself around.  And whilst it can, at times, feel a little self-congratulatory on how it dethroned someone as powerful as Weinstein through the name-droppings of such actresses as Gwyneth Paltrow and Rose McGowan (both of whose voices are mimicked throughout), Lenkiewicz has the smarts to balance such a mentality with a sense of integrity by focusing on certain women whose names may not be as familiar to the ear, but proved just as crucial in officially naming him as their abuser; Ehle injects a certain tenderness as Laura Madden, a former Miramax employee, whilst Morton manages a more tragic intensity as Zelda Perkins, an assistant who went to blow the lid off his abuse of a colleague to Miramax, both of whom knew the danger of breaking their silence was outdone by the necessity in speaking forward to end such tyranny.

Though it goes without saying that audiences should already be layered with a sense of sympathy and compassion for its victims, She Said does a stellar job of driving home the sensitivity of such a case as this, and how truly disgusting Weinstein was, or, more correctly, is.  His presence lingers over the film, and because we know he’s been sentenced to at least 23 years in prison there’s that sense that all of the investigation wasn’t for nought, but the fact he got away with it for so long and knew the right moves to play to keep him preying in plain sight, you can’t help but feel angry at the very industry that brought forth the very movie that celebrates his downfall.

Whilst there’s a certain gloss here that keeps it from being the gritty drama it could have been, She Said is still a celebration of the power of investigative journalism and the strength of the survivors who dared to jump together to eradicate a plague that’s long been poisoning the film industry.  Though it suffers from bouts of dialogue that read like inspirational pull-quotes at times, Schrader has crafted an impactful drama nonetheless, one that speaks to the power of women and their unmatched ability to fight against the very systems that so often corrupts them.