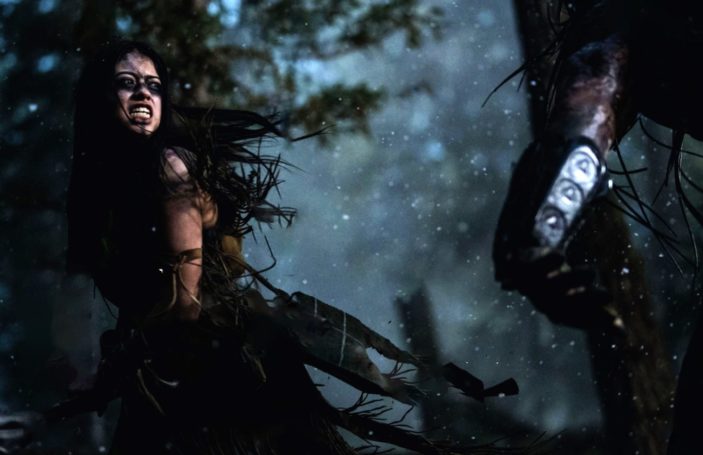 Set in the 16th century America, Prey tells the story of Naru (Amber Midthunder), a young warrior from the Comanche Nation who wants to prove her mettle in her tribe to become a hunter. She faces much discrimination from her tribe due to patriarchal norms and the like, while her brother Taabe (Dakota Beavers) is known as the true warrior of the tribe.

While on a routine hunting task with her other fellow tribesmen, Naru notices something strange in the tracks that others assume it to be a large beast like a bear. Little do they know; the creature (Dane DiLiegro) is otherworldly and could pose a deadly threat to the tribe. It is up to Naru to take it upon herself to protect her tribe and prove to herself that she is a true warrior.

Prey is the latest film from Dan Trachtenberg; who is best known for making sterling genre efforts like the contained thriller 10 Cloverfield Lane and the entry of Playtest in the anthology series Black Mirror. In both of those works, Trachtenberg displays remarkable skill in making the most out of meagre resources in trimming narrative fat by displaying assured storytelling chops in visual prowess.

In the case of Prey, his directorial skill is on full display and that is one of the reasons why Prey is not only the best film in the Predator franchise since the original, but also one of the best genre films of the year. In its taut runtime of ninety-nine minutes, Trachtenberg and co-writer Patrick Aison forgo verbose exposition, numerous franchise call-backs and patronizing dialogue to focus on strong visual storytelling.

Every single shot feels accomplished in its intent as well as clarity. The viewpoints from the characters are sharp from a technical standpoint (especially from cinematographer Jeff Cutter); particularly during the hunting set-pieces. Whether it is through the use of a rotating God’s eye shot above Naru or the drowning of the sound design as she submerges into a bog, Trachtenberg gets into the thrill of the hunt through his characters with a strong directorial hand. And of course, he never forgets to satiate the audience with the expected blood and gore.

Special credit must go to the sound mixing, as every action – whether it is the throw of an axe or an arrow being shot or a gun being fired – delivers a powerful punch that provides ample tension and release in the storytelling stakes.

The film may be a survival horror film, but Trachtenberg and Aison do provide shrewd comic relief with impeccable timing. One example involves a sequential graduation of animals hunting one another until it reaches up to the level of the Predator. Another example involves the opponents facing the Predator and looking quite pathetic as they desperately load their weapons in its presence. There is also a clever contrast between the weapons that Naru uses (an axe tied to a rope) and the ones the Predator uses (a homing device for a spear) that pays off handsomely when the tables turn in the climax. Even the ways the Predator dispatches his opponents have a certain wit to it; like in one scene where he beheads someone, the tree behind him goes down with it, revealing the face of the Predator itself as it bellows with its formidable presence.

Speaking of formidable, the original film was essentially a men-on-a-mission story built on machismo. While Prey is essentially a David and Goliath story, stripped to its basic core of instinct and survival. And it is within that story that the character of Naru makes her mark. Stuck between proving to her tribe of her capability as well as proving to herself that there is more to being a warrior than just being good at hunting, the character arc of Naru is a tried-and-true one. The subtle approach to the arc of Naru is appreciated as Trachtenberg and Aison rarely resort to forced antagonism via the tribespeople to make their point. However, huge credit goes to lead actress Amber Midthunder for making her character as well as her arc work as well as it does.

Midthunder has made strong impressions in TV shows like the acclaimed series Legion and Roswell, New Mexico. Most recently, she has been in small roles in Hell or High Water as well as the Liam Neeson action flicks The Marksman and The Ice Road. In Prey, she is given a humdinger of a role that provides ample opportunity to display her action chops (one memorable scene involves her taking down numerous opponents in a single take) and her dramatic chops (she conveys a nuanced take on immeasurable resolve with believability and humanity) as well as support the striking cultural representation of Comanche in the story – and she nails the role with memorable gusto.

It is a shame that Prey is relegated to streaming services as it is plainly obvious that the film was made for the big screen. Although there is a plus to this as the filmmakers of Prey will be providing a Comanche dub (performed by the actors themselves) that will surely be more immersive in its storytelling as well as its cultural and historical representation. Nevertheless, Prey is a fantastic genre piece that is sure to satisfy fans of the Predator franchise as well as those who just want a grand survival story.

Prey is will be showing on Disney+ via Star on the 5th of August.