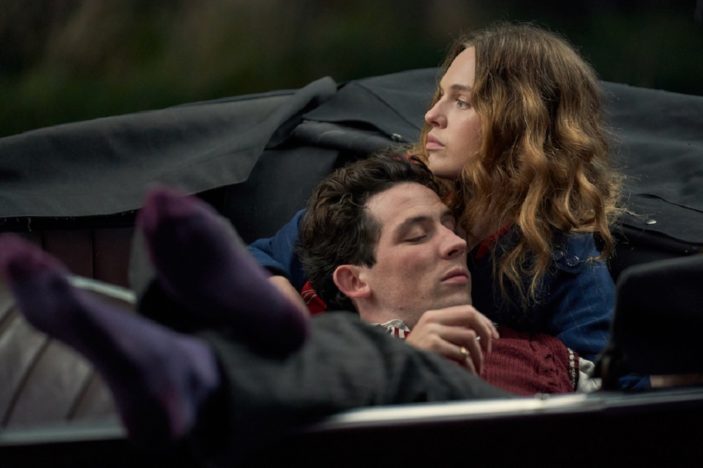 Predominantly set in 1924, the title refers to a Sunday in March when, traditionally, people would visit the church they had been baptized in (their “mother church”) and, in celebration, well-to-do employers would gift their staff the day off to visit their families.  This is the case in the household of the Niven residence for trusted maid Jane Fairchild (Odessa Young) and her colleague, Milly (a chatty Patsy Ferran).

Free from their household duties, the two bicycle into town before Milly jets off to visit her mother, whilst Jane, who we learn was given up for adoption at birth, travels to a nearby estate to continue her secret dalliance with Paul Sheringham (Josh O’Connor), an upper-class lawyer-in-waiting who remains the sole surviving son in his family, following the passing of both his older brothers in the French trenches.

The affair between the two has been going on for some years now – the film jumps back and forth between timelines to indicate as such (though it isn’t always clear as to just how much time has passed) – and it would seem this latest tryst is to be their last, with Paul’s marriage to the icy Emma (Emma D’Arcy) impending.  The families of Paul, Emma, and the Niven’s, Godfrey and Clarrie (Colin Firth and Olivia Colman) – Jane’s employers – have gathered for a celebratory lunch and, with their true colours shining through as to how they feel about such an event, Paul romances Jane at a tender pace, leaving the put-upon Emma to drink her way through excusing his lateness.

This last day with Paul, one that ends on a tragic note, clearly has a lasting impact on young Jane, who we later see has moved on to working in a bookstore and begun a romantic relationship with the kindly Donald (Ṣọpẹ Dìrísù), a fellow writer who often suspects that her writing has been spurred from a place of grief.

It’s grief that ultimately overruns much of Mothering Sunday‘s taxing 110 minute running time, and though it’s a narrative that doesn’t owe us any levity, the depressive streak that lingers over every story beat doesn’t necessarily make for the most enjoyable of viewings.  It’s a more subtle piece of storytelling in its more interestingly framed plot points too, with Paul and Jane’s affair, ironically, being the most monotonous additive; there’s only so much smoking and nudity shots we can watch before it becomes repetitive.

It’s the dynamic of Emma and Paul, the absolute devastation bereaving the Nivens, and Jane’s eventual relationship with Donald that truly give the film the lightest spark of interest, and though the subtlety approached in these relations is a welcome change from stories insisting on obvious exposition, the film doesn’t quite explore these avenues as thoroughly as we’d like; if for nothing else than just to see more of Colman’s stunning performance, with the actress expectedly on the edge of emotional collapse throughout.

As opulent as the film looks and as suitably performed it is, there’s a certain artificiality to how Mothering Sunday presents itself, never quite moving beyond a dramatic perspective that earns the attention the story should deserve.

Mothering Sunday is screening in Australian theatres from June 2nd, 2022.