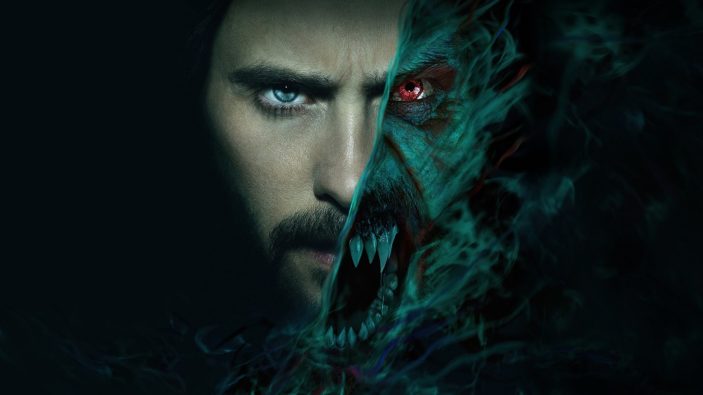 Whilst certain studio efforts saw their initial releases delayed due to the COVID-19 pandemic, few films were as hard done by as Sony’s latest Marvel entrant, Morbius.  With no less than 7 release dates to its name – it was first intended to be released in July 2020 – the living vampire can at least now say it’s seen the light of day, but, unlike such a creature’s link to mortality, it’s sure to have a limited lifespan thanks to genre fans who won’t settle for mediocrity.

Seemingly borrowing traits from other (i.e. better) superheroes, the titular Morbius, the vampiric alter-ego of afflicted Doctor Michael Morbius (Jared Leto, trying his best with Matt Sazama and Burk Sharpless‘ lazy script), has a certain Venom/Hulk-ness about him – at one point he even slyly references the latter’s catchphrase by noting “You wouldn’t like me when I’m hungry” – as he feeds on the unsuspecting in a bid to satisfy his bloodlust, an unseen side effect of the trial Michael has performed on himself to cure his rare blood disease.

Whilst it certainly cures him initially – Leto’s skeletal frame and gaunt face is quickly replaced with a far healthier, 6-pack adorned figure – the drawback of his invented serum is that it isn’t a permanent fix, and in order to avoid reverting back to his sickly ways he must drink blood.  Given that director Daniel Espinosa has proven his worth in both the action and horror fields with 2012’s Safe House and 2017’s underappreciated space scarer Life, respectively, it’s a shame he couldn’t utilise the genre staples of either for a comic book action film with horrific tones, instead letting the film’s uneventful 104 minutes wash away in a sea of uninspired CGI and a worn-out narrative that doesn’t even let Leto loose in the manner we know he’s capable of; say what you will about his recent work in The Little Things and House of Gucci, but the man is fascinating in his performance choices.

Whilst Michael is apparently unaware at just what he’s doing when he’s in his more vampiric form, the script is just as clueless as to what it needs to drive forward with genuine conflict.  Matt Smith provides the film with the kind of camp theatricality it needs to survive as Lucien, Michael’s similarly afflicted surrogate brother, whose response to the serum mirrors that of Morbius, but, instead, he acts with a nefarious glee.  In some ways it’s refreshing to see a comic book movie narrative not frame the hero vs. villain conflict around the end of humanity, as here it’s their own personal humanness that is being threatened.  But, as you’d expect, Morbius doesn’t better itself, spending the entire film building up the boys’ disagreement over how they need to navigate their new found powers and settling it with a showdown that fails to ignite any excitement; when it’s over you’ll be wondering if you did, in fact, witness anything at all.

Given that this is a Sony release, there’s no definitive mention of this taking place within the MCU, but it does exist in a universe that includes both Venom and Spider-Man.  The multiverse opened up in Spider-Man: No Way Home is linked here, albeit in a shoddy, roundabout way, that seems mainly designed to try and get fans on board with both Morbius as a whole and the clearly intended Sinister Six project, a villain-centric outing that’s long been gestating at the studio.  Leto’s Morbius feels like something of an anti-hero more than a straight-out villain, so this film’s tacked on post-credit sequence (which director Espinosa even spoiled prior to the film’s release) featuring Michael Keaton‘s Spider-Man villain Vulture doesn’t feel remotely organic (or, really, make a whole lot of sense), but you can’t blame the studio for trying.

With so much ultimately not happening in Morbius – Adria Arjona as the supposed love interest and Tyrese Gibson‘s incredibly wasted Morbius-hunting FBI agent are clearly victims of a savage edit – it’s evident that there’s a better, longer, more exposition-heavy story that could be told.  Whilst it’s certainly expected that there’ll be mediocre Marvel offerings along the way, it’s such a rarity to see one that so blatantly shortchanges its viewers.  In short, going for the vampiric pun you’d expect, this sucks.