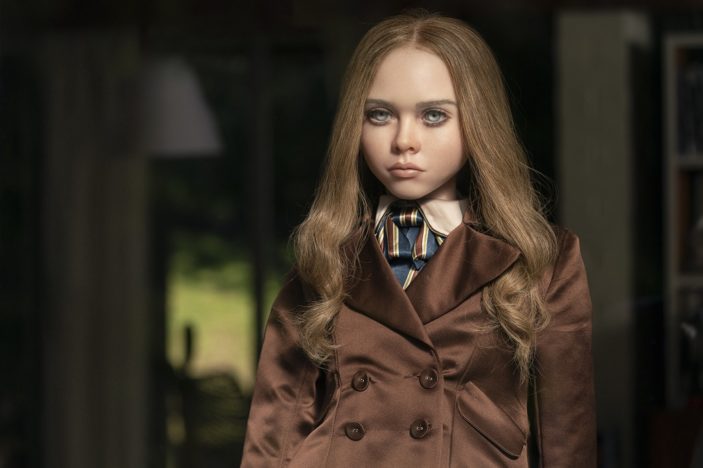 Right from the opening of M3GAN it’s obvious what type of film Gerard Johnstone‘s A.I. horror-lite is going to be: one that doesn’t take itself remotely seriously, has its wink poised at the audience, and knows you can’t think it’s ridiculous any more than the creators already do.

If its trailer didn’t already clue you in on its meme-worthy virality – we’ve all seen the dancing clip, right? – then Akela Cooper‘s script doesn’t take long to catch you up to speed, with the film itself touching on a bigger, more terrifying conversation surrounding artificial intelligence and the extent at which our devices are indeed listening to and observing our own behaviour, but wrapping it up in a knowingly hilarious, occasionally creepy effort that trades deep commentary for dark comedy.

An amalgamation of Child’s Play, Frankenstein and The Terminator, heightened by a queer sensibility that’s evident in her fashion sense and snappy retorts, the titular M3GAN (physically portrayed by Amie Donald and voiced by Jenna Davis) – short for Model 3 Generative ANdroid – is the latest creation from roboticist Gemma (Allison Williams), who’s working for a company (Funki) currently riding off the success of their toy line “PurRpetural Pets”, a pet-like robot working off a combination of artificial intelligence and tablet control.

The toy itself has evidently been enough of a top seller, but Gemma’s boss, David (Ronny Chieng), is scared for their next line when the awareness of a rival toy comes to light, one that seemingly does the same thing as their model for a fraction of the cost.  Using the technology on hand, but applying far more detail to the intricate cogs within, Gemma welcomes M3GAN to the fray at a time when she needs her the most.  Having been granted temporary custody of her newly-orphaned niece, Cady (Violet McGraw), the supremely non-maternal Gemma hopes that Cady’s understandable quietness and distance will be healed through M3GAN’s unique design of pairing with her chosen child – in this case, Cady – and, together, they’ll bond in a manner that helps Cady feel at ease, whilst M3GAN will gain further knowledge about human behaviour.

Of course, this being a horror movie – well, that term is used lightly here – means M3GAN garnering such knowledge about human behaviour results in a killer personality (literally) when the demented doll takes her primary objective of protecting Cady from physical and emotional harm all too literally; how much you wanna bet that Cady’s bully is going to pay a particularly violent price for his infliction? Spoiler alert: he may not make it out of this alive.

Though such a film as M3GAN doesn’t necessarily need an abundance of carnage to get its horror point across, Johnstone’s film is at its strongest when it’s letting the fabulously attired “doll” loose on unsuspecting victims.  Originally a gorier film that leaned further into its violent capabilities, the watered-down theatrical cut still offers its share of set-pieces – all of which are elevated by M3GAN’s unhinged temperament – but you can’t help but wonder just how much more gloriously deranged it could be had we seen the full extent of what our girl is capable of.

Whilst there’s a lot about M3GAN that’s worthy of unnerving audiences when you truly break down just what’s possible regarding A.I. and our own relationship with technology – the film’s final shot is a neat nod to how our own home assistants could turn on us – Johnstone, Cooper, and producers James Wan and Jason Blum are more intent on the campy possibilities present within the titular model.  Calling the film stupid or ludicrous is ultimately a compliment, so there’s no point in fighting M3GAN on its own insanity.  Embrace her – you’ll live longer.