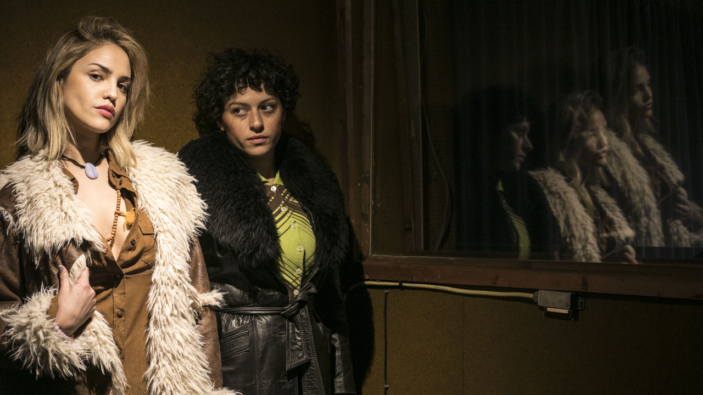 As most musicians can attest, the hopeful critical and commercial success of your debut album ultimately means very little if your sophomore record under-delivers.  Such is the dilemma for Glass Heart, the fictional girl group at the centre of Jamie Adams‘ familiar-feeling Love Spreads.

Seeming personal vendettas, the strain of writer’s block, and the clashing of egos all give way throughout Love Spreads‘ crisp 93 minute running time, as the various band members do their best to come together during a 5-week recording session in the London countryside.

The predominantly British band is headlined by American vocalist Kelly (Alia Shawkat), who would best be described as something of a muted diva – someone who will readily sabotage a recording session but remain alarmingly calm and rational whilst doing so.  It’s “her band”, you see, so when she refuses to record any new material off the basis of being uninspired, put-upon manager Mark (Nick Helm), who is constantly sweating being at the mercy of a demanding record company, tries his best to force a solution.

Letting bandmate Alice (Tara Lee) write and record her own music in the hopes of Kelly agreeing and collaborating further is not that solution though, and when this “betrayal” results in Alice vacating Glass Heart, the entrance of sunny Patricia (Eiza González) both serves as something of a warning and a blessing to the blindsided Kelly; for all her faults, she’s genuinely surprised at how quickly Mark arranges Alice’s replacement.

With a simplistic narrative and contained tone, it’s wise on Adams’ part to keep Love Spreads void of much unnecessary B-side plot strands.  Sure, one could argue there’s not much to it as is, but in keeping the focus solely on the dynamic of the group and maintaining a rather grounded approach, there’s an almost-documentary type aesthetic to their conversations and sessions; a sweet moment between a guard-down Kelly and Patricia feels like a fly-on-the-wall sequence that helps us see them beyond what could be regarded as stereotypical personalities, with Kelly’s “diva” act and Patricia’s overt happiness naturally engrained into their psyches.

As much as this is Glass Heart’s journey, Love Spreads wisely dedicates its time towards Mark too, showcasing the love for his family that he seems to so rarely get to see and his genuine interest in seeing the band succeed; this passion all the more reason his eventual conclusion in the film is so devastating.  Much like Kelly’s muted yet over-the-top personality, the film very much follows that suit.  There’s conversations and sequences that are in tune with how you imagine an ego-centric artist would be, but there’s a grandiose missing that keeps the film from feeling like it’s able to achieve, or perhaps comment on more.

Likely to hit more of a note with musicians familiar with such a process than the casual movie goer, Love Spreads keeps itself contained (almost to its own detriment) but earns enough of a gold status thanks to winning and incredibly natural performances from its ensemble, particularly Shawkat and González, the latter particularly proving her dramatic worth after so many surface-level roles.

Love Spreads will be available in North America on demand and digital and in limited theatrical release from June 18th, 2021.  An Australian release is yet to be determined.