Film Review: Lightyear is a humorous, action-driven adventure that’s low on stakes, but high on entertainment 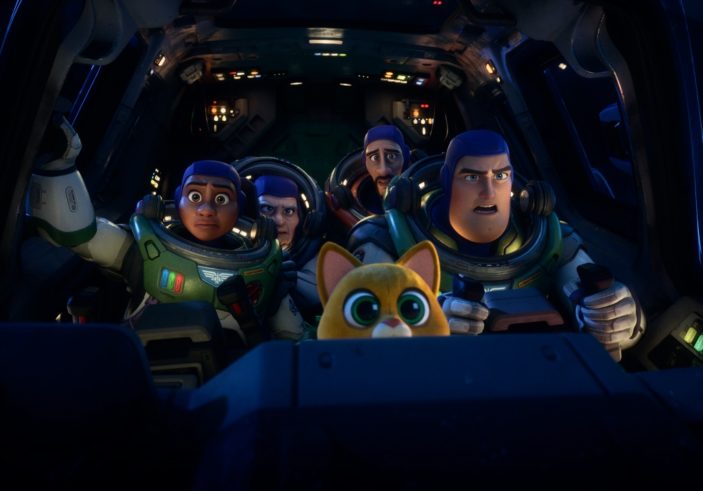 When Lightyear was first announced it understandably caused confusion as to how it aligned itself with the Toy Story films its character originated from.  Was it a spin-off, something that existed separately from the franchise? Or, did it perhaps focus on a real-life astronaut, suggesting that the Toy Story universe was set in a period where intergalactic space travel had been achieved?  Ultimately, it’s neither, with the opening logline of Angus MacLane‘s film easily laying out the foundation so there’s no confusion for the viewing audience: In 1995, a little boy named Andy got a toy inspired by his favourite movie.  Lightyear is that movie.

Whilst linking itself so closely to a series of films like Toy Story means Lightyear arrives with a certain amount of expectation, you’re far more likely to enjoy the ride if you view the film on its own merits, as a humorous, action-driven adventure that’s low on stakes, but high on entertainment.  Any world building outside of the space setting is peculiarly void, but MacLane and Jason Headley‘s script still manages enough of an emotional injection that keeps us invested in the titular hero’s plight to get home.

Lightyear himself, voiced in suitably heroic fashion by Chris Evans (an acceptable replacement of Toy Story vocal staple Tim Allen), is plenty cocky, though inherently likeable, and, unfortunately, it’s the former personality trait that gets him and the hundreds on board his ship marooned on a distant planet.  Supported by his second-in-command, Alisha Hawthorne (Uzo Aduba), Lightyear takes it upon himself to get his crew back home, testing various theories in order to achieve the correct percentage of hyper-speed necessary to do so.

These various attempts lead to a certain break in how time is experienced differently for Lightyear than it is everyone else, and in hoping to ease him back into his yearly period Alisha assigns him Sox (Peter Sohn), a “Personal Companion Robot” in the form of a cat that, over time, provides far more use to Lightyear than merely offering him friendship and White Noise sounds to help him sleep; Sohn’s deadpan delivery and the character’s adorable rendering make him an instant stand-out and, surely, the hottest merchandise commodity born from the film.

With Lightyear a fine hero, Sox a stand-out comedic foil, and the combination of Izzy (Keke Palmer), Mo (a hilarious Taika Waititi) and Darby (Dale Soules) proving worthy space crew support, it’s a shame that the film doesn’t knock all aspects out of the park with its villain, Emperor Zurg (James Brolin), not entirely landing.  Perhaps a bit more shoehorned in due to him already being a known figure in the Toy Story films, Lightyear tries hard to give him a presence – and Brolin provides fine, menacing voice work – but he’s the most forgettable element in a story that doesn’t entirely need such an antagonistic force.

Though there’s easy criticism to be fired at Lightyear for being a more standard offering from Pixar afforded the theatrical window their more individual titles sadly weren’t (Soul, Luca, and Turning Red all being direct to Disney+), it’s still a visually stunning, family-appropriate outing that may not quite reach the heights of infinity and beyond, but you’ll be glad to be captained outside the galaxy all the same.

Lightyear is screening in Australian theatres from June 16th, 2022.