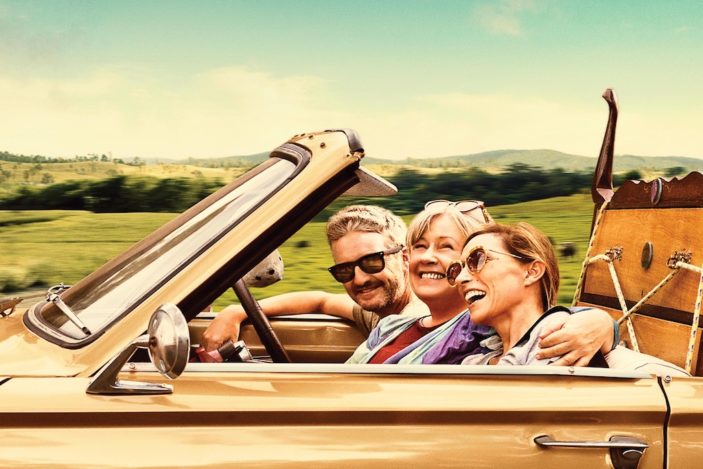 Despite a rather sunny marketing campaign – the poster alone evokes feelings of joy – June Again is a far more emotionally devastating feature than audiences may be expecting.  That’s certainly not a criticism on behalf of JJ Winlove‘s feature film debut, more a light warning to audiences who may not be prepared for its psychological weight.

The opening minutes are a testament to this, as the titular June (Noni Hazlehurst, luminous as she is heartbreaking) struggles to gain awareness of her surroundings, having spent the last 5 years in an aged care home on account of her dementia.  Moments and supposedly familiar faces blur into one another as Winlove purposely confuses the audience in his bid to transpose June’s awareness.

After a visit with her daughter (Claudia Karvan‘s Ginny) seemingly confirms June’s state of mind is permanently altered, and a lighthearted exchange with the local warden (Uli Latukefu) plays even further into her forgetfulness – she asks for the security code to be released, he happily provides it knowing she’ll forget within seconds – the next morning brings a shocking reprieve to her illness.  As if the fog that is her cloudy mind lifted without a trace of effort June’s pre-stroke memory returns, astonishing everyone in the facility in the process.

As taken aback as they are, the doctors on hand assure June that this spell of awareness is only temporary and remaining in the home is ultimately what’s best for her.  Evidently once a very headstrong personality, June doesn’t suffer being spoken down to and, after utilising the unsuspecting warden for the security code (which she obviously won’t forget this time), she makes a getaway back to the only address she ever assumed she would need to know – her actual home.

The home having been sold by her kids in the years since she’s been administered – Stephen Curry plays her son, Devon – brings about the realisation that so much of the life she knew has transformed, ultimately setting her on a path of rediscovery.  Whilst Winlove’s script doesn’t exactly exercise subtlety when it comes to the trials and tribulations June’s family have experienced in the years she’s been away – every character has practically suffered substantial hardship – the performances on hand are all so wonderfully nuanced that it’s a coincidental narrative trope we can easily forgive.

Being known primarily for his comedic abilities allows Curry to shine through in a role that benefits from his humorous timing but is ultimately driven by his dramatic prowess.  A character that initially feels quite lightweight and, in a certain manner, pathetic, Curry infuses Devon with a defeated realism that makes him instantly relatable.  Clearly seen as the golden child in comparison to Ginny means Karvan’s role comes with an immediate sense of emotional disadvantage.  The mother/daughter relationship is always one that can be tricky to navigate in a manner that doesn’t fall on overt stereotypes, and June being the boundary-less matriarch means Winlove’s script could easily surrender.  Thankfully, Karvan effortlessly embodies the character, juggling the love and frustration she harbours towards a mother that can’t help viewing interference and criticism as a form of compassion.

June Again is ultimately Hazlehurst’s film though.  As she phases in and out of lucidity, her expressions shifting between recognition and wide-eyed confusion, she never portrays June as an archetype.  We are with her every step of the way, falling in love with the woman she was – and still is – and aching in the meanwhile knowing it’s only a matter of time until she’s no longer this June again.  Though the film is guilty of emotional manipulation, it can’t be denied how authentic the performances are, elevating whatever dramatic certainties Winlove imbues the story with.

June Again is screening in Australian theatres from May 6th, 2021.