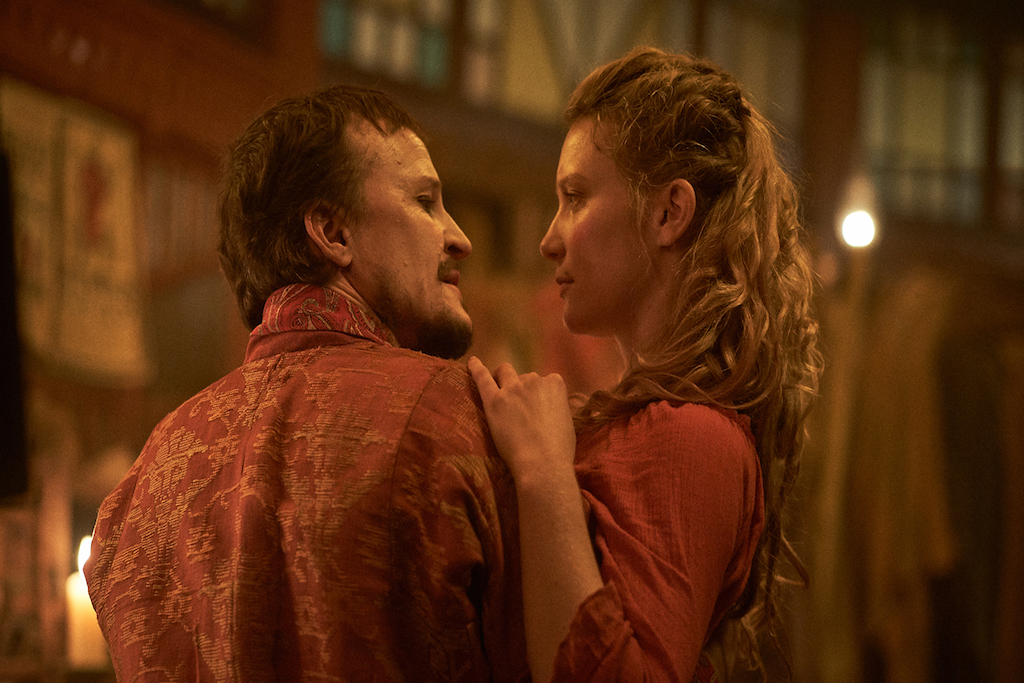 A peculiar film aided by two strong central performances but a distinct nastiness that keeps it from maintaining consistency, Judy & Punch is a brave debut feature from Australian actress-filmmaker Mirrah Foulkes.  Unsure if it wants to be a dark comedy or something more horrific – it sadly lacks orderly humour or thrills to be considered either – the film, tonally erratic it may be, is nonetheless another stellar showcase for two of our country’s finest character actors, Damon Herriman and Mia Wasikowska.

Set in a medieval time period in the small town of Seaside, the titular couple (Herriman’s Punch and Wasikowska’s Judy) are hoping their popular marionette show will earn a prominent look-in from a talent scout, ideally setting up a more secure future for them and their baby daughter.  The show, where Punch’s puppet regularly thumps Judy’s in an act of supposed hilarity, somewhat mirrors their off-stage existence where he polishes off whatever liquor is on hand, which often leads to him raising either his hand or his temper, or both.

When Judy leaves Punch to tend to their daughter for an afternoon the most tragic of circumstances transpires, and when Judy confronts Punch on this he beats her within an inch of her life, dumping her body in the woods and setting out to the townsfolk to play the grieving widower, the most grand of his public performances yet.  By the time the narrative shifts in this particular direction we have already garnered a supreme disliking for Punch (him blaming the deaths of his wife and child on a defenceless elderly couple only secures the deal), so when Judy’s barely-breathing body is found by a group of gypsy children and returned to an outside-village of witches, we are momentarily invested in seeing the rejuvenated Judy seek her revenge.

Judy & Punch‘s eventual narrative direction keeps mostly in tone with what Foulkes lays out from the get-go, i.e. a story that teases black humour and a brutal core without fully committing to either, and it’s her seeming indecisiveness on how to present her story and its ingredients that keeps the film from becoming something truly worth recommending.  On one hand it could be easy to categorise the film as something of a commentary on domestic violence given the brutality surrounding the violent sequences involving the couple, but then the death of their infant daughter is presented in a near-slapstick manner – yes, you’re supposed to giggle at the shocking scene of a child dying from being thrown out of a window – that it undoes any of the seriousness it hopes to portray.

It’s difficult to pinpoint just who Judy & Punch is made for as the film is never funny enough to be considered an all-out comedy, and I imagine the film’s graphic bouts of violence will deter others, leaving it as an awkward hybrid of both straddling the lanes of its own identity crisis.  Of course, as fluctuating as it may be, Foulkes’ bravery in writing such a story should be commended, and to have both Herriman and Wasikowska a the forefront is a coup all in itself; he continuing to prove his brilliant ease at portraying unhinged, she using her expressiveness to evoke a multitude of innermost emotions.

Had Foulkes wholly committed to her premise and been unafraid to buck the trend of a happy ending, Judy & Punch could’ve been something truly special rather than simply commendable.  Herriman and Wasikowska prove the only consistent contingent within this bizarre feature, one that audiences best proceed with caution to as the packaging isn’t necessary indicative of what’s hiding inside.